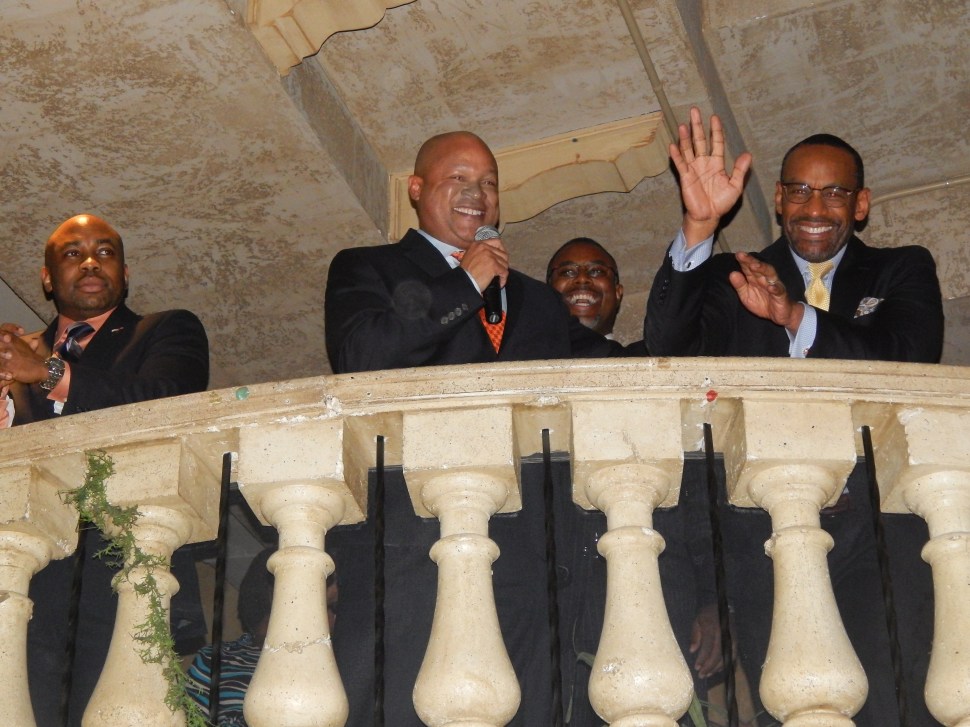 But that doesn’t detract from the specific political power-wielding by the following, each of whom stands at a critical juncture in the lead-up to 2017…

The biggest Democratic County in the state, Essex wields a billion dollars’ worth of public patronage and is that single most valuable county in a Democratic Primary. Any doubts? Just ask Rush Holt and Frank Pallone, both of whom got blown out by Cory Booker in a special 2013 U.S. Senate Primary. Booker romped to victory that year with 36,303 votes tallied in his home county, compared to 24,328 out of Bergen and 22,927 out of Hudson (the next two biggest keys to his win). The ultimate inside game and finesse player, Jones (pictured, waving, above, in Atlantic City last year) is a partner with 1868 Public Affairs who has the added advantage of years’ worth of experience, including grassroots organizing in his hometown of East Orange, a stint in the Assembly and consulting for major statewide campaigns. As the state heads toward 2017 and a possible Democratic Primary for governor, Jones stands in the most important position, his power enhanced by the role he must play in aligning the state’s biggest city, Newark (run by Mayor Ras Baraka, who beat the county in his 2014 mayoral bid) with the county (run by Essex County Executive Joe DiVincenzo). Danger zone: The most powerful chair in the county could find himself reduced to the weakest if a 2017 civil war splits Essex among at least three gubernatorial candidates, each of whom aligns with incumbent senators (and/or assembly people) in a legislative election year in which all seats will be in play. If Jones can’t maintain order, the following scenario is not unthinkable: the organization line for governor to Senate President Steve Sweeney (D-3), who runs with the team of state Senator M. Teresa Ruiz (D-29), state Senator Nia Gill (D-34), Shavar Jeffries for Senate (LD28), and Assemblyman John McKeon (D-27) for senate; Senator Dick Codey and state Senator Ronald L. Rice (D-28) off the line with gubernatorial candidate Phil Murphy and Mila Jasey; Tai Cooper for state Senate (LD29), Assemblyman Tom Giblin (D-34) for senate, and Amiri “Mitty” Baraka for state senate (LD28) on a ticket with gubernatorial candidate Steve Fulop of Jersey City.

In 2011, Stellato took charge of a greatly depleted organization. It’s not an exaggeration to say that with Gov. Chris Christie ascendant, Kathe Donovan in charge as county executive, and the seeming cross purposes of state Senators Loretta Weinberg and Paul Sarlo never indicative of a same-page party, Bergen Democrats were decidedly downbeat. But Stellato, a former Lyndhurst mayor and hyper-kinetic old school politician, set about rebuilding Bergen, and enjoyed victories in 2011, 2012, 2013 and, most significantly, 2014, to fully win back control of the county. He now has both legislative and executive branches at his fingertips and every Bergen-based senator on his side with the exception of 39th District Republican Gerald Cardinale. A general election behemoth, the Bergen organization line will also count critically in a Democratic Primary. Danger zone: Just like Essex (above), Stellato could find himself trying to sort through a maze of loyalties and multiple primaries. Conceivably, he could be confronted with Assemblyman Gary Schaer (D-34) with Fulop for state senate against incumbent Senator Sarlo (D-34) in support of Sweeney; and Senator Weinberg for Murphy and Assemblywoman Valerie Vainieri Huttle for senate (Fulop).

The grand old man of GOP politics in the State of New Jersey, Gilmore has a county stocked with 98,865 Republicans – the third largest on-paper concentration in the state (after Morris 104,493 and Bergen 102,323). But it’s the 172,000 unaffiliated voters who in the best of circumstances pour out in droves (witness Christie 126,000 votes in 2013, the second largest tally for the governor after Bergen (136,178). That Bergen figure more than any other underscores either the opportunity the GOP had in the northern county or the flat reality of Christie lacking coattails. Regardless, the GOP in the last two years lost control of the county in Bergen while Gilmore has solidified his influence in Ocean. He partnered with old intra-party rivals in Burlington last year to wall off Steve Lonegan’s renegade congressional bid and cement his own power with a win by U.S. Rep. Tom MacArthur. Danger zone: a perceived waning influence of the Republican Party as Christie winds down leaves opent he question of Ocean’s relevance.

The unassuming Prieto of Secaucus has the chairmanship of a county totaling 136,500 Democrats, third most in the state behind Essex (182,882) and Bergen (155,302). He’s also speaker of the General Assembly and generally liked and respected. In the words of one Trenton insider at the drinking fountain this morning in the Statehouse, “Vinny keeps the trains running on time.” Whatever that means. Anyway, Prieto has a catbird seat going forward, with the possibility of reenacting the glide path of his predecessor, U.S. Rep. Albio Sires (D-8), who went from the speakership to congress. Prieto has the advantage of gubernatorial candidate (Fulop) looking to break out of Hudson, and a longstanding history of good relations with Bergen and Passaic. Danger zone: U.S. Senator Bob Menendez (D-NJ) and state Senator Nick Sacco (D-32) are both the apparent objects of investigations; federal in the case of Menendez and state with Sacco. No one’s filed any charges, but a weakening by either boss inevitably splashes on Prieto and diminishes his power.

Currie doubles as state chairman of the Democratic Party. Appointed to the statewide job in 2013, he has warmly embraced the role and commands universal respect as a dignified elder statesman who in his public deportment accomplishes a rare feat in New Jersey politics: class and street cred.. He’s close to the northern region’s most powerful congressman, U.S. Rep. Bill Pascrell (D-9) and played football with Stellato when they were high school age.He also has one of the legislature’s most potent lawmakers: Budget Chairman Assemblyman Gary Schaer (D-36) of Passaic City. Danger zone: Currie’s power derives in no small part from the alliance he’s built with Stellato and Prieto. But if that triumvirate crumbles, Passaic on its own remainsl a much smaller and less politically forceful player

Now chairman for seven years, the Glenn Paulsen protege – through a combination of patronage and patience, has maintained control of what on paper is a split, advantage Democratic county. Having defeated Freeholder Aimee Belgard in last year’s CD3 race with his hand-picked candidate (MacArthur), Layton this year wants to banish Belgard from county government in an off-year election. Danger zone: Presidential election years are routinely unkind to Burlington Republicans, when the machinery finds itself swamped by unaffiliated voters who lean D. SO look for a tough 2016 at the county level if the past gives any indication about the outcome.

More than any other region, the south operates as a block more than in isolation from county to county, but Beach and Norcross have a double impact. The latter is a state senator, while the former – younger brother of South Jersey Democratic Party uber-boss George Norcross III – just elected to Congress. Danger zone: Better North Jersey organizing could undermine South Jersey dominance.

To Central Jersey politics observers, the smart and politically savvy McCabe represents Democrats’ best hopes of reaching the next generation of Democratic voters in a big county rich with party-building opportunities. Danger zone: He still has a lot of work to do in a Middlesex still riven by old rivalries going back to the era of then-Woodbridge Mayor Jim McGreevey.

Voted in as chairman last year of this key Republican stronghold, the sheriff of Monmouth burnished his power with freeholder victories – the GOP controls every freeholder seat and all legislative seats – and the selection of his ally  attorney Christine Hanlon as the replacement for Clerk Claire French. Danger zone: Rival Monmouth County Democratic Chairman Vin Gopal is a political animal and does not appear to be going anywhere anytime soon.

Davis has control of the county with a majority of Republican freeholders. Danger zone: he will be at the center of the most intense legislative conflagration in the state this year as he attempts to get a Republican ticket elected in LD2 in the face of well-funded Democrats who want the torque point of Atlantic City.

Honorable Mention: Assemblyman Jerry Green (Union) (Green has the irritation of his running mate’s implosion to handle and longstanding divisions threatening to gobble up the machinery of Union). If he can do that, and win local elections, he jumps onto the list. 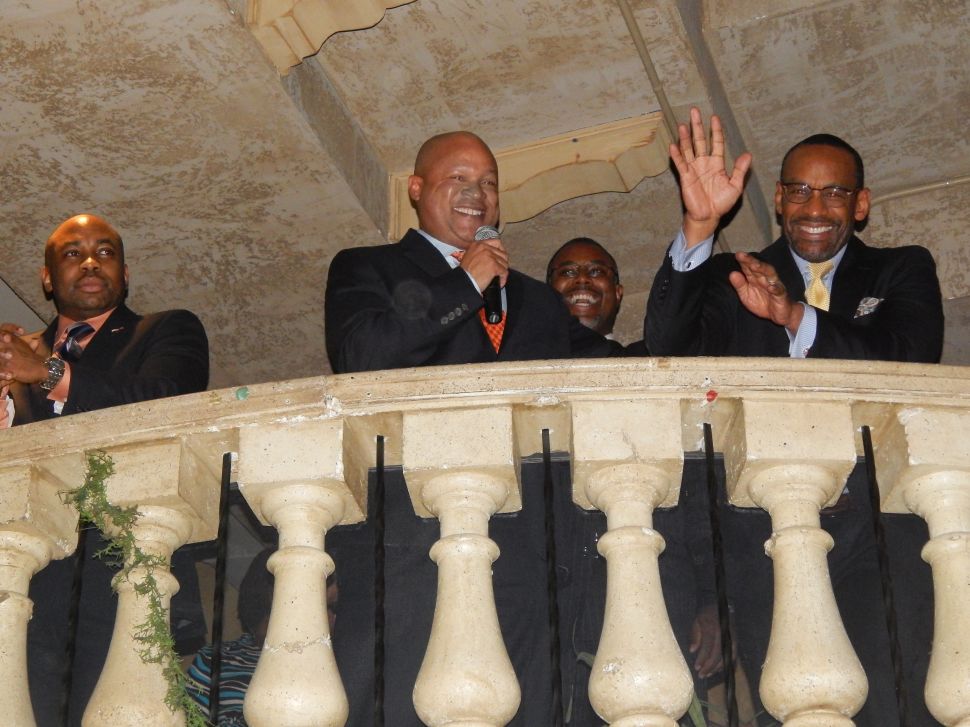