Indiana Gov. Mike Pence swatted a hornet’s nest when he signed a bill that detractors say would allow Hoosier State businesses to deny services to gay and lesbian couples. Amid threats to boycott Indiana businesses and cancel conventions, Pence is, according to news reports, “working with legislators to amend the law and ‘clarify’ that it does not promote discrimination.”

Already, Salesforce.com said it would cancel its corporate travel there and hometown hero Bill Oesterle, the CEO of Angie’s List—a Republican who chaired Pence’s predecessor Mitch Daniels’ 2004 race— said that his crowd sourcing recommendation company will scuttle a deal with Indianapolis to expand its headquarters there. Even the rock group Wilco has canceled a show.

It’s unclear why Indiana’s bill has attracted so much attention—at least 20 states have similar “religious freedom” laws and they’re modeled on the national Religious Freedom Restoration Act that became law in 1993. But here in New Jersey, amid our state’s long tradition of tolerance and progressiveness on gay rights, no similar law has been seriously considered.

As the 2016 presidential campaign heats up, the contenders have begun to weigh in. Somewhat predictably, the Republican candidates have supported Pence and the Democrats have opposed. Yesterday, Jeb Bush came to Pence’s defense, comparing it to Florida’s law and saying it allowed “people of faith space to be able to express their beliefs.” (Faith space? Is that a thing?) Ted Cruz added his amen, saying Pence was “holding the line to protect religious liberty.” Marco Rubio, Bobby Jindal, Rick Santorum, Scott Walker and Ben Carson have all added their support. Hillary Clinton, whose husband signed the federal version into law, disagreed; she tweeted that it is “sad this new Indiana law can happen in America today.”

So where is Chris Christie in all this? According to The Advocate, the only 2016 candidates who have not revealed their positions are Chris Christie and Rand Paul, “who haven’t yet commented directly on Indiana’s Religious Freedom Restoration Act.”

The governor’s record on gay rights is complicated. He has long maintained that he is personally opposed to gay marriage and in 2012, vetoed a bill that would have permitted gay marriage. But in 2013, NJ became the 14th state to legalize gay marriage when his administration declined to challenge a state court ruling in favor of it. Then, last October, he strongly supported a states’ rights position on gay marriage, saying states “should have the ability to decide on their own.”

That’s generally in keeping with a governor who is personally to the right of much of his state on social issues but to the left of many of his presumed primary opponents. At the same time, Christie and his backers have been strong supporters of—and strongly supported by—Governor Pence.

During Christie’s re-election campaign, he received $3800 from Governor Pence directly plus another $3800 from Daniel Dumezich, the Treasurer of the Indiana Republican Party who is also very close to Gov. Pence. Meanwhile, Christie supporters were equally generous to Pence when he first started running for the 2012 governor’s race. The governor’s brother, Todd Christie, donated $2500 on Nov. 14, 2011, and records also show a $2500 donation from Community Education Centers, where close Christie associate Bill Palatucci was working at the time.

In addition to contributions, Christie campaigned actively on Pence’s behalf—a reality that exposed a governor working to elect those considered far to his right. Always a popular draw on the trail, the New Jersey governor spent Wednesday, October 17, 2012 in Indiana, first at a rally for then-candidate Mike Pence at the Express Scripts Distribution Center in Indianapolis, and later at two events for Richard “pregnancy from rape is something God intended” Mourdock, in Merrillville, Indiana.

This should hardly be interpreted as some sort of endorsement of Pence’s views on “religious freedom” laws. Contributors and even campaigners cannot be expected to agree with every aspect of every candidate they support. After all, Leonard Lance, never regarded as a social conservative among his fellow Republicans, gave Pence $1000 on the same day as Todd Christie, supporting his House colleague as Pence began his run for governor; Elberon Development Co, headed by moderate Republican Anne Estabrook, also chipped in $2500.

(A spokesman for Gov. Christie did not return an email seeking comment; if he does, this story will be updated to include his views.)

With Republicans tripping over themselves to support a fellow Republican under fire, Christie’s decision to stand apart from the pack might just represent smart strategy. Republicans tend to punish candidates who depart from party orthodoxy, but they also can be tough on poseurs. Christie is at his most successful, as a campaigner and as a leader, when he does things his own way. 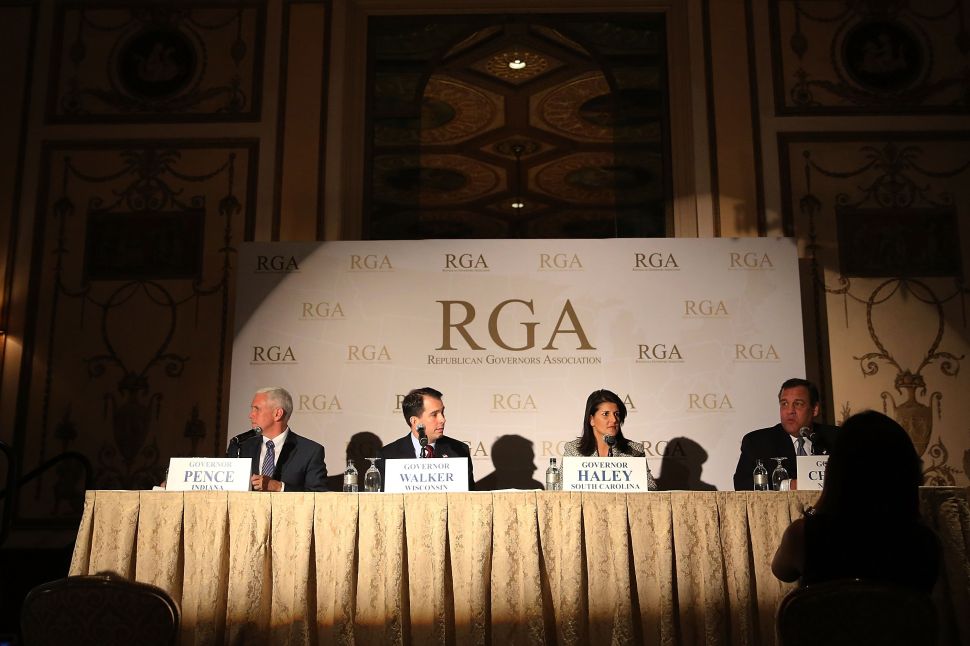