Biennials and triennials are sprawling, often tedious affairs—each inevitably offers a mixed bag, ranging from the sublime to the … crappy. As a viewer, your experience with these zeitgeist exhibitions, and your ability to absorb hundreds of images and ideas in a limited space and timespan, depends as much on the skill of the curator or curators as it does on your mood, stamina, expectations, the kind of day you had, and what you ate for breakfast.

That said, if you wish to be a credible participant this spring in any discussion of Contemporary art, or any other kind of art for that matter, it would be requisite to see and experience the New Museum’s highly anticipated and ever-controversial Triennial, this one titled “Surround Audience.” The exhibition encompasses serious considerations of social media’s impact on our image-saturated and hyper-scrutinized world, and suggests how, as individuals, we need to better understand the increasingly complex, ever-changing cultural landscape. It opened last week, and remains on view in New York through May 24.

Purportedly offering a taste of art of the future, “Surround Audience” is the museum’s third installment of the extravaganza held every three years to highlight the work of young and emerging artists from around the globe. I can hardly think of an exhibition of this scale—featuring works by 51 artists from 25 countries—that has more self-consciously kept the audience in mind through every step and phase of the production. That is not to say that the show is merely entertaining. Organized this time by New Museum curator Lauren Cornell and super-trendy video artist Ryan Trecartin, there are many raw, hot-button issues to contend with here, ranging from gender politics and racial inequity to the environment and terrorism. Some of these themes will be further developed as the exhibition’s many performance and live-event programs unfold during the course of the show.

The Triennial unabashedly aims to seduce its audience from the outset. Stepping off the second floor elevator, visitors are lured into the show by Juliana (2015), Frank Benson’s realist-style, life-size, lithesome reclining nude sculpture in resin with a greenish-blue patina. Displayed on a tall plinth, the ostensibly female figure with long braids and elaborate eye makeup proves, on closer inspection, to have male genitals. As Mr. Benson mentions in the Triennial’s excellent catalogue, the work recalls The reclining nude hermaphrodite figures in ancient Greco-Roman sculpture, which symbolize the human ideal—an individual with the best attributes of both sexes. The sculpture proves to be a portrait of the transgender artist and performer Juliana Huxtable, whose own large, striking photographs, are hung on an adjacent wall.

Another unapologetically alluring piece, Distant Feel (2015), by the brilliant French-born multi-media artist Antoine Catala, whose work I last saw in depth at the 2013 Lyon Biennial, features slick ad images and a large, illuminated aquarium. As part of a kind of promotional campaign for the concept “empathy” that Mr. Catala devised, the tank contains live coral that form two “E” shapes that face each other.

Subtle, but equally thought-provoking, are Mexican artist Tania Pérez Córdova’s modest-scale stone and terracotta sculptures that seem to address the impossibility of achieving perfection in an increasingly compromised environment. Her works sustain a kind of abject grace in simple geometric forms embedded with materials like contact lenses, bird droppings, cigarette ash and a borrowed SIM card. London-based artist Eloise Hawser presents equally incongruous imagery in her sculptures and 3-D works, especially in Haus de Braut (2012), a large metal object made of a roller door topped by a handmade swan, a work that is at once romantic and foreboding.

And if you are lucky enough to experience Spanish artist Daniel Steegmann Mangrané’s virtual reality piece, Phantom (2015), whose headset is accessible to only one viewer at a time, you’ll be lost in a stylized Brazilian jungle, a truly “audience surrounding” work.

Surprisingly, in the context of the show’s emphasis on the digital realm, there are a number of engaging paintings. Canadian-born artist Sascha Braunig produces a variety of highly polished abstractions in which details of a human head or a figure emerge as if from a video animation or as cells cavorting under a microscope. A series of large oil-on-canvas works by Chinese painter Firenze Lai add a welcome counterpoint to the show’s more high-tech concoctions, and recall a stylistic fusion of Edvard Munch and Milton Avery.

Photos and sculptures by Korean artist Onejoon Che, a former military police photographer, explore the faux socialist-realist style of sculptures produced by a Korean firm specializing in the construction of massive public monuments in Africa. At once poignant and comic, these images touch upon military and economic geopolitics.

Regarding the show’s overall layout, I couldn’t help discerning the influence of New Museum curator Massimiliano Gioni, whose super-slick and coherent 2013 Venice Biennale significantly raised the bar for how these kinds of gigantic group shows ought to look and feel. Here, despite its visual and thematic density, the installation as a whole feels surprisingly cohesive and airy.

Finally, it should be noted that at every biennial or triennial, stars emerge; the event becomes a before-and-after for their careers. This time around, those stars are the curators of the show and, at least on initial viewing, Philadelphia-born New York artist Josh Kline. He galvanizes the exhibition with a room-size installation of sculptures and videos, addressing issues that hit close to home. Mr. Kline’s Freedom (2015), a Triennial commission, features sculptures of life-size figures of policemen in the form of Teletubbies, with video monitors and audio components that explore methods of Internet surveillance and violence.

On a rear wall of the darkened room, a digitally altered image of newly elected President Barack Obama delivering his 2009 acceptance speech, is uncanny and unnerving. It’s a bold and unforgettable work that perhaps most successfully reflects the curatorial ambitions of “Surround Audience.” 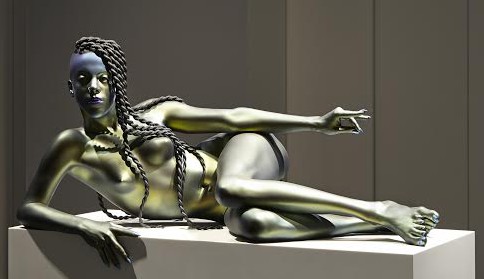