NEWARK – With the specter of union-busting Wisconsin Gov. Scott Walker’s rising popularity casting a shadow over potential 2016 Republican presidential candidates, one of New Jersey’s most prominent Democrats questioned the labor negotiating tactics of the state’s Republican governor, who might also run for the White House.

“When you hear [Governor Chris Christie] focusing on pension reforms and benefit costs, it got the attention of a lot of people nationally. But the reality is that the governor is using that as a distraction from what the real problem in the state right now is: the economy,” said state Senate President Steve Sweeney (D-3), a potential 2017 Democratic gubernatorial candidate, to PolitickerNJ moments after speaking at a labor rally at Rutgers-Newark on Tuesday in support of university workers getting fair contracts. “If we had just grown our economy to the national average, we’d have $3.3 billions dollars more in the state coffers, which means we could be funding pensions and not have the crisis we have right now.”

Labor union concerns have come to the fore in recent weeks since the governor voiced plans during last month’s budget address to further overhaul the state’s pension and benefit system, which has billions of dollars in unfunded liabilities. Using the final findings of a much-anticipated report from the commission Christie convened late last year to study and propose solutions for funding the state’s pension obligations, the governor laid out a plan to put $1.3 billion towards next year’s payment, in part by overhauling the current pension system.

Among the plan’s specifics are to freeze existing pension plans, aligning future public employee retirement benefits with private-sector levels, and transfer the assets, liabilities and risks of the existing pension and new retirement plans to employee entities that wish to assume this obligation.

Whatever the pro and cons of Christie’s plan, Sweeney, a union ironworker by trade, sees the governor’s pension and benefits gambit as part of the gamble Christie might make on a presidential bid.

“He’s trying to speak to a populist message nationally. In the Republican Party, attacking unions, taking benefits and reducing pay is a populist position for his side of the aisle,” Sweeney said. “We really need to focus on getting the economy going, because there is no excuse for not getting it going.” 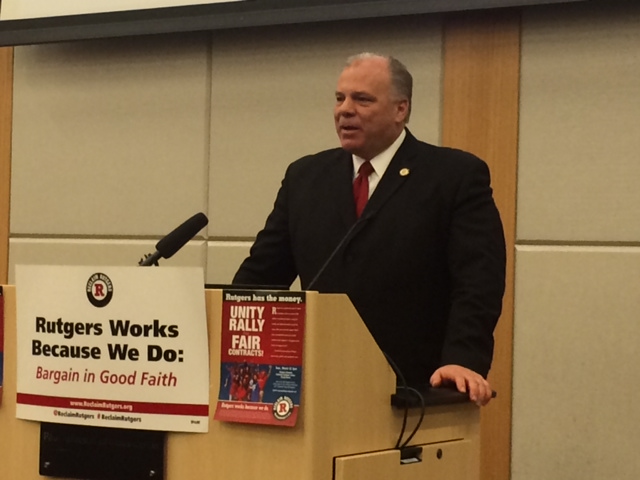