I miss Alicia Florrick in court.

Not that Cary and Diane aren’t great, because they are, but I, like weird woman-killer Colin Sweeney, find that Alicia has a certain je ne sais quoi as a litigator that the other characters on the show just can’t touch. Sure, she saved the day for Colin Sweeney’s case with a fourth-act deus ex, but she wasn’t doing nearly enough this week to justify being absent from the courtroom.

Then again, Alicia is a busy woman who very much wants to be your next Cook County State’s Attorney. She and Frank Prady spend the episode back-channeling and asking people for money. Alicia’s campaign PAC has been robocalling decent Chicagoans as they sit down to dinner, appealing to everyone’s innate homophobia by pandering to them with the gayest voice of all time. Gays are, in Alicia’s words, Frank’s coalition, not hers. Things are getting nasty, so both candidates decide to ask Lou Grant for dark money, or hard money, or soft money (can you tell I don’t know how campaign finance works?), and it goes really well for Alicia and not so well for Frank because Lou likes her ass and he very vocally does not like fags.

Lou Grant said the word “fag” approximately five or six times. I wanted to rewind to get an exact count, but I ultimately chose not to. So… is The Good Wife trying to make fun of Sheldon Adelson, or what? This character was responsible for one of the best exchanges I’ve heard on TV in a while:

Guy Redmayne: Right, but I’m rich, so it really doesn’t matter, does it?

Other than that exchange, though, this Redmayne story was hard to swallow. It’s admirable that, 100+ episodes in, the show is holding fast to its mission of exploring the limits of Alicia’s ethics, but I wish that happened this week in a way that didn’t feel so cartoonish. Yes, Alicia takes the money, because campaigns are expensive, and she helps win a case for a person who is for sure a serial killer, but I don’t see how that leads her to a teary wine-assisted confession to Grace that she’s not a good person. It was a beautiful way to end the episode, but I would have liked to see Grace refuse to let her mother off the hook so easily. Because here’s the thing: Alicia’s not necessarily a good person. She’s an effective person. She’s an efficient person. She gets the job done. But being a good person isn’t high on her list of priorities. Can someone just release her from the burden of needing to be good, once and for all? I sure hope that’s the journey this show is on.

Speaking of cartoonish, whenever the case of the week features Colin Sweeney, I squirm in my seat, not just because he’s the creepiest character on television, but because I worry that the show doesn’t know what to do with him. Tone is one of the things that The Good Wife nails so wonderfully, until Colin Sweeney shows up. As a character, he’s just so… written. He’s never felt like a real person. He can never stop killing women, yet he’s never been successfully convicted of it.

But apparently, he’s so good at killing women that a fictional TV show has appropriated his wife-killing for their own content, complete with a doppelgänger actor. So Colin decides to sue for defamation, and Julie White is left in the unenviable position of defending the show. When that defense starts to fall apart, she decides to change strategy and try to prove that Colin really did murder those wives of his. All the while, his new boo, Renata, is sitting in his lap and being coy and nuzzly, despite the fact that she may very well be murdered soon.

I’ve been a fan of both Dylan Baker and Laura Benanti from jump street (anyone who had the good sense to wife up Becky Ann Baker is a winner), but I have a hard time with Colin Sweeney stories, because the show is very clear that he’s a murderer. So when Alicia tells Colin she doesn’t like him, you can’t help but agree with her. It’s hard to be entertained by Colin Sweeney, because when he’s in a scene with a woman, you’re not entirely sure that he won’t strangle her. No matter what Colin’s into sexually, it always has the chance of ending with his partner’s untimely death. That makes him unpredictable, yes, but not necessarily believable.

And then there was the C story with Kalinda. I love Kalinda Sharma. She was a groundbreaking character for network television — a bisexual woman of color who rocks boots and has no problem breaking your kneecaps for information. I feel comfortable living in a world that contains Kalinda Sharma.

But this week, she pretty much just drove Miss Daisy. By “Miss Daisy,” I mean Lemond Bishop’s pre-teen child. The big victory for Kalinda this week was discovering that Dylan Bishop is being bullied by a schoolmate called All-American Mike. This story is lent a modicum of suspense by an SUV that won’t stop following Kalinda and Dylan. We never really learn what that SUV is up to, or why Lemond needs Kalinda to provide childcare, but it leads to a scene in which Lemond pours Kalinda some booze and confesses how hard and sad and lonely it is to be a parent sometimes. During this scene, I did my best Sheryl Sandberg lean-in, hoping that we’d peel back another layer of Kalinda’s onion. The scene was structured to reveal something heretofore unknown about everyone’s favorite investigator. But alas, Kalinda just chugged her whiskey and peaced out. I don’t know exactly where the Kalinda-Lemond relationship is headed, but I have vigorously written several vignettes of fan fiction that indicate my hopes. My greatest hope is that Kalinda faces a lot of consequences for the very illegal thing she did to get Cary acquitted, and that somehow, Lemond Bishop comes to her aid.

Next week, Grace sniffs glue. That might be a dream sequence. I hope it’s not. 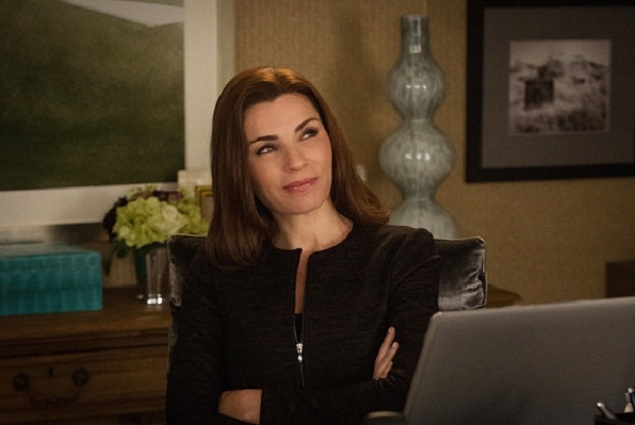