In the season’s second episode, we learn that despite having such undeniable qualifications as an impeccably tailored wardrobe and a chic haircut, the Senate does not, in fact, vote to approve Claire’s bid to become the ambassador to the UN. But never mind all that official democratic process nonsense! Claire simply asks President Francis to override the Senate vote and make her Ambassador anyway, and he totally does.

As it turns out, not only is the Senate not into fulfilling Claire’s ambassadorial dreams, the Democratic leadership sees Frank as a mere placeholder and doesn’t want him to run for another term. He eventually handles this issue by scheming, but before he gets there, we see him full-on bawling on the floor of his office, just cwying wike a widdle baby because no one wants him to be pwesident.

Out: Threesomes with the Secret Service

Gone are the days of marathon threesomes with wide-eyed cutie pie Agent Meechum, here to stay is boring old husband-and-wife sex. Claire finds Frank in the midst of his crying spell, and snaps him out of it by joining him on the floor, hiking up her (impeccably tailored) skirt and riding him like he’s that weird rowing machine from the first season.

Episode Three brings us the best character of the season so far in the form of Russian President Petrov — played by Lars Mikkelsen, who is both the poor man’s Vladimir Putin and the poor man’s Mads Mikkelson, aka Hannibal’s older brother. This episode is all about this Petrov fella, who brings his adolescent sense of diplomacy and old school misogyny to a White House dinner. Petrov holds court like a drunk little lord, singing, insulting, and bon motting, until he eventually graduates to full on sexual harassment when he puts the moves on Claire. Um, that is the UN Ambassador you just kissed, Comrade Pres.

Out: Peace in the Middle East

The ostensible reason for President Petrov’s White House visit is the discussion of a Russo-American pact that would bring troops from both countries into the Jordan Valley, thereby instantly resolving the Israeli-Palestinian conflict. Unfortunately for humankind, this (frankly quite bizarre) pact falls through — mostly because Petrov and Underwood can’t agree on anything besides the fact that Claire looks fantastic in her impeccably tailored blue dress.

Punk feminism also came to dinner, inconveniently on the same night as President Petrov… and it stormed out before the first course. Wouldn’t the true punk rock thing be to score some free food and then engage in anarchy?

Frank’s main rival for the party nomination soon emerges in the form of Solicitor General Heather Dunbar, a smart yet compassionate lady whose suits are not quite as impeccably tailored as Claire’s. Is the nation ready for a female president? Probably. Is it ready for a president named Heather? Seems pretty unlikely.

A season that opens with the protagonist unzipping his fly and urinating on his father’s grave sets a pretty high bar in terms of symbolic defilement, but House of Cards manages to outdo itself with an Episode Four scene set in a church. At first, it looks like Frank has actually come to the house of worship for moral guidance after feeling the weight of the recent choices he has made (war stuff, drone strikes shit, etcetera). But nope, he’s still Frank, and he full-on hocks a loogie onto the face of our Lord and Savior, declaring, “I’ve got God’s ear now!”

Episode five is another dose of America fan fiction, as Frank attempts to single handedly cure unemployment. He does this by declaring the economic issue to be an Official Disaster, thereby gaining access to FEMA funds and using them to subsidise job creation. It’s a fantastic plan as long as the country is never hit by another hurricane or flood ever again.

In: Freddie, for one poignant moment

Who should we see get in line for one of these newly created jobs? Why, it’s our old friend Freddie, he of the rib shack and the device to humanize Frank Underwood. 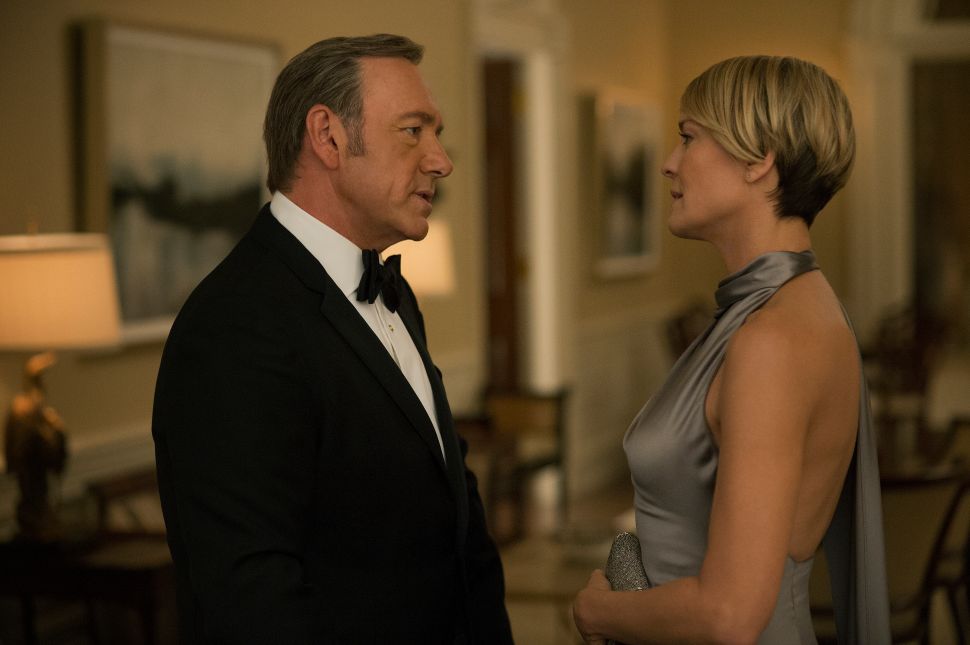