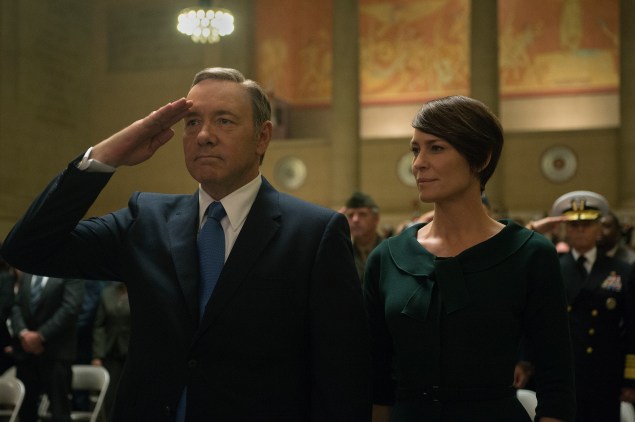 In: Gay rights with caveats

Episode 6 takes Claire and Frank to Russia, where they reopen negotiations with Petulant President Petrov. Part of these talks center on the release of Michael Corrigan, a gay rights activist who has been serving time in a Moscow prison for his “deviant behavior.” Petrov agrees to release Corrigan, as long as the American reads a statement that basically amounts to wrapping his arms around Petrov (no deviant!) and professing that they are best friends forever. The problem is that Corrigan has become a worldwide symbol for human rights, and reading a statement like that would undermine everything he’s done so far.

Ambassador Claire chooses to deal with the situation by engaging Corrigan in a frank discussion about marriage and freedom. Unfortunately, Corrigan’s longstanding marriage to his partner John is in shambles and freedom doesn’t mean as much to him as proving his status as an activist. And, as always, Claire is unwilling to actually be frank about her marriage to Francis.

Claire decides she won’t leave Corrigan’s cell until he agrees to read the statement and return home. But she’s just soooo sleepy, on account of being super busy serving as Ambassador and also, she wanted to stay up to watch the aurora borealis from Air Force One! Corrigan convinces her to rest her eyes for juuuuust a minute, and then he hangs himself with her scarf. Meaning that, once again, Claire’s wardrobe ends up stealing the show.

Claire is understandably upset that, in her capacity as Worst Ambassador of All Time, she literally fell asleep on the job and now her new friend An Important Civil Rights Symbol is dead. While ostensibly giving a mild speech at a press conference that day, Claire totally loses her mind and calls out President Petrov, implicating him in Corrigan’s death.

Petrov is pissed. Frank is pissed. And anyone who understands the role of a UN Ambassador should be pissed. “I never should have made you Ambassador,” Frank says.

“I never should have made you President,” Claire replies.

There are time jumps in Episode 7. It’s kind of confusing.

After the Corrigan/Petroc fiasco, relations between the Underwoods are at an all-time low. Which is understandable, as Claire’s inability to control her emotions basically launched a new Cold War. (Women, am I right?) You know things are bad because Frank smokes a cigarette by himself.

A group of Tibetan monks come to the White House, as part of a cultural exchange. Assumedly, Tibet received beef jerky in the deal. They hang out near the Presidential Bedroom (not what it’s called?) and create a beautiful sand mandala.

Once the monks complete the mandala, they dismantle it, as ritual dictates. This makes Claire and Frank consider the nature of time and also their marriage.

After considering the nature of time and also their marriage, Frank and Claire decide to renew their vows in a ceremony back in Gaffney. Frank brings along Tom Yates, the renegade novelist he’s hired to write his biography/America Works propaganda, and shares a bunch of juicy stories Yates isn’t actually allowed to use in the book. But hey, there’s always a place for blind items.

For reasons entirely organic to the show and in no way a device to help establish the timeline, Claire makes a choice to dye her hair brown for the renewal ceremony — the color it was when she and Francis first met. It looks nice.

Episode 8 is all about an impending category 5 hurricane that promises to cause several billions of dollars’ worth of damage to coastal states. Of course, this aid money already been reappropriated by Frank to fund America Works, and he has to kill his baby in order to insure that President Bush continues to go down in history as the worst disaster reliever in American history.

At the very last minute, the hurricane veers away from the States and hits Bermuda or some other inconsequential place. Turns out, this upsets ALL of our characters. Frank is pissed because he’s already pulled his AmWorks funding, Yates because he no longer has a book to work on, and our new badass reporter character Kate Baldwin because she had just written a big piece about President Underwood that relied on hurricane metaphors.

After heading in this direction all season, Doug finally relapses after learning that Rachel has  murdered, and goes on one hell of a bender. It involves a bar fight, quarter-operated basketball games, and some straight-from-the-bottle drinking, because that is what TV alcoholics do. His bender ends in the Oval Office, where he places his head in Underwood’s lap and curls into a fetal position. Showing unbelievable restraint, Frank does not choose to punish this display of weakness by picking Doug up by the scruff of his neck and shooting him dead like the injured dog he is.

In fact, Frank actually shows compassion! He calls Heather Dunbar and chews her out for allowing Doug to work for her while in his fragile post-accident state. And then, he calls Doug’s brother to come help out. And he neither spits nor pees on any of them!

He’s practically a new Frank, and he doesn’t even need to dye his hair to show it. 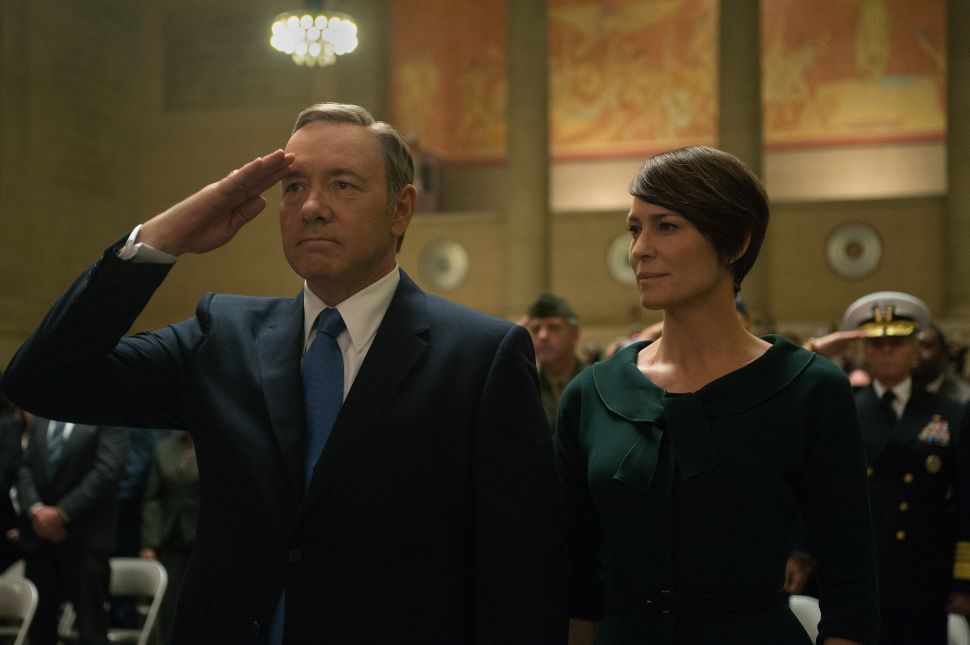