With tensions between the U.S. and Russia at a season high in Episode 10, Frank flies to the Jordan Valley to confront President Petrov face to face and demand that the latter leader withdraw his troops from the region. Surprise, surprise, that weird plan to bring peace to the Middle East via Russian and U.S. occupation did not quite work. Petrov eventually agrees to leave, but he gives Underwood a non-negotiable condition: Claire must step down as ambassador.

The problem, you see, is that Claire is a woman, controlled by her emotions and therefore easy to manipulate. Which is something Petrov totally did, orchestrating an elaborate ploy to feed her information via his ambassador. What a dick.

The ostensible reason Claire gives for leaving her precious U.N. behind is that she wants to focus on campaigning for her husband’s upcoming reelection. And this means running every aspect of her physical appearance and personality through a focus group. The people like Blonde Claire better than Brunette Claire, and so Brunette Claire must fall on her sword for the second time within the hour.

After hackerboy Gavin Orsay delivered photos of Rachel’s dead body, Doug lifted the restrictions on his passport, and dude immediately skipped town. The fate of Cashew, Gavin’s lovable guinea pig, remained unclear… until the end of the 10th episode, when Cashew appears on Lisa’s (ex-girlfriend of Rachel who was manipulated by Gavin for info) doorstep, giving us TV’s best cameo of the year.

Surprise! We learn in Episode 11 that Rachel is not dead, after all! Her crime scene photos were doctored by Gavin to gain him some more leverage over Doug. Once safe, with Cashew taken care of (phew), Gavin reveals that Rachel is actually alive and relatively well, somewhere in New Mexico. And Doug freaks the motherfucking fuck out, destroying his computer by smashing it to pieces and putting those pieces, inexplicably, in the sink.

In: That debate episode you were waiting for

Debate episodes are to political dramas as Breakfast Club episodes are to CW shows. Eventually, there will be one, and for House of Cards, show 11 is it. Underwood, Dunbar and Jackie Sharpe face off in the very first debate of primary season. Frank performs pretty well until he gets overly ambitious and throws his ostensible ally, Jackie, under the bus, criticizing her step-parenting skills. Needs more Bender.

Tom decides that if he can’t steal Frank’s secrets through his tongue, he’ll go to the next best source: Claire. He follows her around for a few days and she remains mostly stoic until he manages to catch her at a vulnerable moment while literally having blood drained from her body. (For a blood drive, not some Illuminati thing… that’s next season.) Dizzy and on the verge of passing out, Claire opens up about the moment Frank proposed to her. She admits that she agreed to remain in the marriage for seven years, and then reassess whether it’s working for her… and has been doing this every seven years since. Implicit is the idea that she’s currently in a period of reassessment, and not entirely sure of her conclusion.

Out: Everyone taking Underwood’s shit

Fed up with Underwood’s games and sick of his insults, Jackie decides to throw her support behind Heather Dunbar, in a shocking move that yields her nothing in return. More America fan fiction! Remy quickly follows suit, handing over his tiny flag pin to indicate that he’s resigning as chief of staff—which isn’t quite as dramatic as setting the White House lawn on fire or removing an article of clothing or accessory larger than a thimble, but his point gets across nevertheless.

Out: Rachel, In: Cassie Lockhart

Episode 13 gives us some insight into Rachel’s new life in New Mexico, where she’s working quite hard at several different jobs and generally leading a simple, nice little life. Until Doug shows up to murder her ass, that is. Always susceptible to Rachel’s charms, Doug is having a hard time pulling the trigger and… literally pulling the trigger. Rachel pulls out a brand new passport registered to Cassie Lockhart, the new identity she plans to inhabit from here on out, and Doug lets her go.

Out: Both Rachel and Cassie Lockhart

Psych! He changes his mind a minute later and does, in fact, murder her ass. Cassie, we hardly knew ye.

Did Frank end up paying the ultimate price to stay in power? Is that the allegory of the show? Maybe, as the only thing he actually cares about other than ribs and those “FU” cufflinks, Claire, leaves his ass in the last scene of Episode 13. It’s probably hot flash-related, right?

Out: Season Three of House of Cards

Till next time, Underwoods! 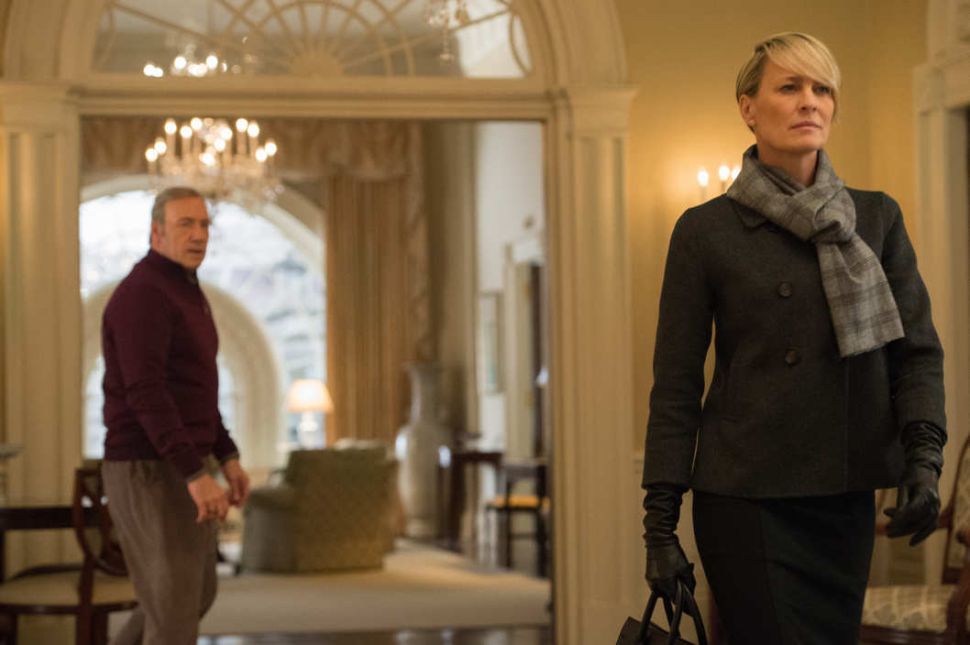