Exactly how tight is the friendship between former President and potential future first gentleman Bill Clinton and Mr. Epstein, who owns a private island in Florida and is now accused of having sex with girls as young as 12 and procuring young girls for sex with other friends of his? What was Bill Clinton doing on the island with Mr. Epstein on multiple occasions and why did he fly overseas on Mr. Epstein’s plane at least 10 times?

What hardball PR and legal tactics will Hillary Clinton’s campaign use to try to make this potential problem—which could potentially derail her planned presidential bid—disappear? Will those tactics work, or is Ms. Clinton’s campaign already dead, even if the exact time of the funeral is not yet known?

Why is the Left-Wing Media Machine pretending that anyone who asks questions about the Epstein-Clinton connection is a paid stooge of the Right-Wing Media Machine? And why is the Right-Wing Media Machine, which would normally be gleefully talking about this or any sordid affair involving the Clintons, being unusually reserved in hyping the case? (Hint: Because some notable conservatives and prominent supporters of Israel — a constituency that used to reside solidly in the Democratic camp but which the GOP in recent years has been wooing, with some notable success— have been implicated in the Epstein scandal too.)

How did our political and media elites ever become so hopelessly corrupt?

Mr. Epstein’s current predicament is hardly a shock. Back in 2008, at a time he had also been indicted (he was subsequently jailed for about a year) in Florida for sex crimes, Philip Weiss wrote an astonishing story about Mr. Epstein in New York magazine that showed that his legal problems back then had not, surprisingly, made him more “sober and reserved.” Much to the contrary, the allegations against him (from, among others, a 14-year-old girl) had made him more “sparkling and ingenuous.”

This earlier investigation of Mr. Epstein, led by the FBI, was reportedly closed and the evidence sealed after Mr. Epstein pleaded guilty to two “minor” counts related to charges that he was involved in underage sex. (How crimes involving sex with underage girls can be deemed “minor” is something of a mystery.) Mr. Epstein has reportedly been a significant donor to the Clinton Foundation, before and after he was implicated in sex crimes.

So OK, let’s acknowledge that there really is a right-wing media and political machine that will attack Bill and Hillary Clinton for any alleged crime, even jaywalking. It’s also true, in my view, that Ken Starr, who sought to impeach Bill Clinton in the mid-1990s, is a twisted zealot and that it’s probably a bad idea to impeach a president for sexual misconduct, because that has nothing to do with his or her ability to govern effectively, keep the country out of needless wars, and help make life better for the American people, especially the growing underclass, and do something about police violence against African-Americans and other manifestations of institutionalized racism.

But Bill Clinton’s conduct, in and out of office, suggests he is a sexual predator without a conscience and has used his power—even the power of the Oval Office—to win sex from many women. That doesn’t mean Bill Clinton has no appeal to women and every woman who ever had sex with him was a “victim.” But some of them were.

It’s complicated in some cases and I don’t know precisely how Monica Lewinsky feels about it, but at minimum Bill Clinton lied to her shamelessly, and in my view, took advantage of her even though she was not a passive participant in the “relationship” they had. And while Monica Lewinsky very unfairly became a joke on late night TV (and sadly I probably laughed at some of those jokes), a lot of people, especially men, respected Bill Clinton more after the Lewinsky scandal because it showed that he could get laid and/or fellated.

It’s great that Lewinsky worked through all of this and has become quite an impressive person. And as noted in this recent New York Times story, some feminists “who had stayed silent on the first go-round” have more recently defended her, deploying terms that have emerged since the 90s like ‘slut-shaming’ and ‘media gender bias,’ and that late night hosts who once mocked her, like David Letterman and Bill Maher, have now expressed remorse for having done so.

To understand just how cold and calculating Bill Clinton is, consider that he reportedly interrupted one sexual encounter with Monica Lewinsky to take a call from a Cuban-American sugar baron from the crucial battleground state of Florida. The narrator of Vladimir Nabokov’s Lolita ultimately admits to himself that he was a sexual predator: “Unless it can be proven to me—to me as I am now, today, with my heart and my beard, and my putrefaction—that in the infinite run it does not matter a jot that a North American girl-child named Dolores Haze had been deprived of her childhood by a maniac, unless this can be proven (and if it can, then life is a joke), I see nothing for the treatment of my misery but the melancholy and very local palliative of articulate art.” Bill Clinton is incapable of thinking anything like that, and indeed stories heard by every Washington reporter, but which would be hard to independently confirm, he has learned nothing from his past mistakes. Someone else who comes to mind in this context is former Congressman Carlos Danger, aka Anthony Weiner, whose long-suffering wife, Huma Abedin, happens to be Mrs. Clinton’s closest aide.

Bill Clinton is not running for president now but Hillary Clinton is. She must love him at some level but it seems clear she stayed in the marriage at least in part because she believed it would further her own political ambitions. And in the end, her marriage may kill her political ambitions because her husband may be subpoenaed to testify about Jeffrey Epstein. And that probably won’t help Ms. Clinton’s poll numbers (in swing states or anywhere) because most Americans understand that a potential first gentleman should probably not be consorting with pedophiles.

Media coverage about the Epstein case has been sadly predictable. The New York Times and other “mainstream” outlets have reported on the case—of course, it’s too salacious and marketable to ignore—but none as of yet has pointedly and persistently asked important questions about it. The Times is a great newspaper, but it is generally on the liberal side when it comes to national politics and is probably afraid to look at the story too carefully and draw the obvious conclusions.

Mother Jones and other liberal outlets—which pretend to be independent and sometimes criticize Democrats but, just like the union movement, will end up voting for Hillary Clinton or anyone else who becomes the 2016 Democratic presidential nominee—are generally pretending that this is just the right-wing media machine ganging up on the poor Clintons. See, for example, a Mother Jones story last January, “Republicans Are Pushing a New Clinton Sex Scandal.”

I’m not even going to mention David Brock, the former right-wing hatchet man turned liberal hatchet man who now is Ms. Clinton’s pathetic attack dog. Once Mary McCarthy said about Lillian Hellman (who I sort of admire), “Every word she writes is a lie, including ‘and’ and ‘the.’” That’s David Brock for you.

Meanwhile, the right-wing media has been unusually reserved about the Epstein case. That’s probably because defense attorney Alan Dershowitz, who is an Obama supporter but sufficiently noisy in his pro-Israel stance to pass for conservative, has been deeply implicated in the whole story and former Israeli Prime Minister Ehud Barak reportedly might be a material witness in the case. So you’ve got right-wingers and Likudniks who may get into trouble too. The whole story is unpredictable so everyone is afraid of it.

Weirdly, three of the only media outlets asking interesting questions about the whole story are Radar (cited above), Gawker and the Daily Caller. Writing in the latter, Nixon acolyte Roger Stone, a well-known Republican political consultant and the Daily Caller’s men’s fashion editor, recently asked, “Is this [the Epstein affair] the scandal that ends Ms. Clinton’s campaign?” Which is one of many good questions the media should be asking more.

What all this means is that Hillary Clinton’s husband has already been implicated in the Epstein scandal and that his dubious private behavior, which has already once distracted the entire nation from more important business, could do so again if Ms. Clinton does indeed run for president.

What’s worse, at least from my personal standpoint, is that if Ms. Clinton were to become the Democratic nominee I still might vote for her because the likely Republican candidates have retrograde and vile public views about race, class, gender and gay rights, and those are important to me, and especially because the two main parties are virtually indistinguishable when it comes to fundamental economic policy. Because both are bought and paid for by Wall Street and financiers like Jeffrey Epstein, as well as other powerful interests who overwhelmingly fund our political campaigns.

Actually, I still might not vote for Hillary Clinton if she becomes the nominee, but I probably will if my college-age daughter asks me. Even though I don’t think she likes Ms. Clinton all that much—and I expect she likes her husband less—she is appalled and outraged by the GOP’s stone age social politics and because she would like to see a woman become president. And that’s a good enough reason for me. Maybe.

This is why the Epstein affair is a national disgrace and shines a bright light on the current tragedy of American democracy and this country’s abysmal national political and media elites.

Ken Silverstein has been a staff writer at Harper’s Magazine and the Los Angeles Times. He has authored several books, including The Secret World of Oil (Verso) and The Radioactive Boy Scout (Random House). His primary obsessions are politics and media, and his reborn “Washington Babylon” column be buttering up and skewering both about every three weeks in the New York Observer and on Observer.com. 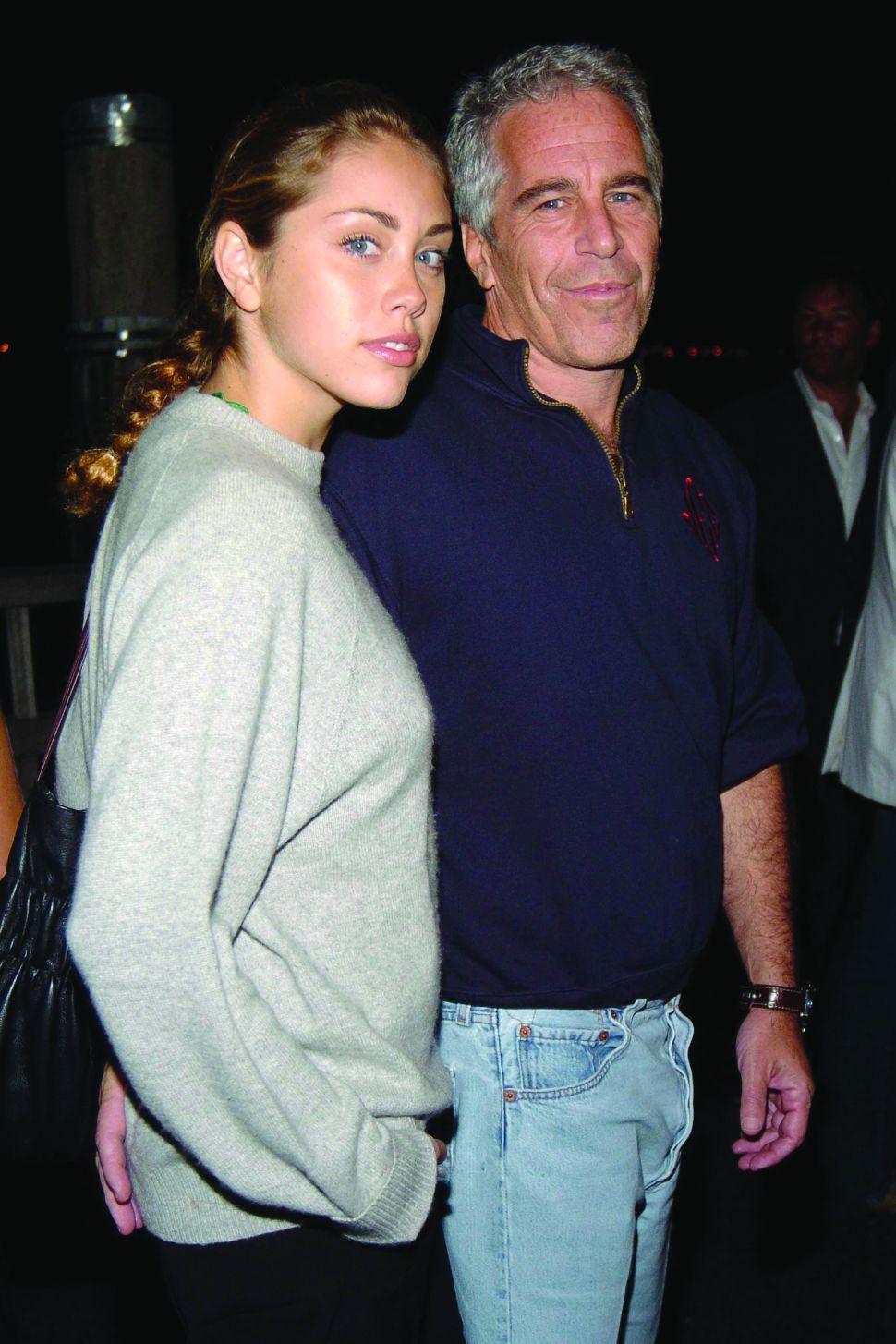