From what I remember of The Real Housewives of Atlanta, Shereè Whitfield is tough to get along with. Turns out, she’s also tough to set up—and to actually date. In conclusion, Shereè’s just not good at interacting with other humans. But let’s delve deeper!

Shereè, of RHOA fame, is this week’s first millionaire. Things ended badly with her NFL ex-husband, and now she hasn’t dated for seven years. “There’s cobwebs,” Patti says of Shereè’s vagina, which, frankly, is a terrible mental image. “No one has seen the light of that day, so to speak.” K THANKS PATTI WE GOT IT.

Shereè misses having a companion, and wants someone with whom she can spend the rest of her life.

Patti wants to figure out why Shereè hasn’t been able to find love, so she takes her to “one of her favorite crystal places.” Can you imagine being the sort of person who has multiple favorite “crystal places”?

Anyway, Patti detects that Shereè has an angry energy, all stemming from her relationship with her ex-husband. She instructs Shereè to choose a crystal representing her and her ex’s relationship, and to hold it tightly in her hand while saying, “I wish you love and light and may you go on your merry way.”

“The crystal absorbed that,” Patti says sagely. Wow—who needs therapy when you can just do that?

Our second millionaire is the most adorable man alive and my new celeb crush, professional tennis player Sam Querrey. He’s ranked 33rd in the world, which doesn’t sound that impressive, but I honestly don’t even care because his adorable-ness makes up for it: he hates partying, wants a wife and kids, and also enjoys chilling in his backyard and feeding his dog bacon.

Patti meets Sam for a tennis lesson and to talk about girlz. Here, we learn another cute fact about Sam: that his celebrity crushes are Taylor Swift and Selena Gomez. Patti, like me, is positively tickled by Sam; she likes that he defies the typical “athlete” persona (looking at you, Luke Rockhold). She promises to find him a down-to-earth, family-oriented girl who’s confident enough to deal with his frequent traveling for work.

For whatever reason—maybe because the producers realized they’re the best—Patti’s reverting to the old-fashioned recruiting sessions this week. I’m so glad. There’s nothing like watching Patti parade potential daters into her office and then savagely humiliate them one by one.

Still, Patti manages to find four great girls for Sam, and three great guys for Shereè. The mixer, she decides, will take place on a boat, because of something about salty air and amorous feelings. “The motion of the ocean is going to set the tone,” she says.

The mixer—which is set up speed-dating style—goes great for Sam. He really hits it off with Leah, a tall blonde woman who’s way too show-offy about her semester abroad in Austria, and Kylie, the ballerina who we also saw on Jesse Kovacs’s episode.

Things are not going as well for Shereè, who—despite whatever the heck happened with that crystal—still seems to be harboring a lot of angry energy. Granted, one of her daters, Derrick, promptly asked how old she was, but she’s also needlessly cold towards Rasheed and Terry, who seem like great guys. Seriously. Shereè looks like she’d rather be examining the cobwebs in her vagina than sitting on this boat.

At the end of the mixer, she tells Patti she has no idea who she wants to pick. Shereè is #overit big time.

In a last-ditch effort to help Shereè be open to love, Patti brings in James Van Praagh, self-described “spiritual healer,” “master teacher,” and “healer.” He basically just tells Shereè not to be afraid to listen to her gut, or something. He also says he sees her getting married someday, and the colors pink and white. Okay, James, your promo time is over now.

On to the best part of the show: the dates! Sam chooses Kylie, the ballerina, and takes her to do archery. So cute, right?! From the get-go they’re clearly really into each other; they pretty much giggle the entire time. Eventually they make a bet: whoever can shoot their arrow through a balloon first wins a kiss on the cheek from the other person. Sam wins, but confesses he would have been just as happy if he’d lost. BE STILL MY HEART.

Shereè chooses Terry, a TV producer who inexplicably elects to wear head-to-toe denim to their date at the painting studio. He seems really sweet though: He brings her flowers and compliments her shitty painting.

Meanwhile, Sam takes Kylie to a fondue restaurant that I think I’ve seen on The Real Housewives of Beverly Hills before (whichever Housewife went, I remember she only ordered plain chicken, not to be dipped on fondue). But anyway, there’s major chemistry between him and Kylie. They feed each other gooey cheese-covered vegetables off skewers, and I don’t even have second-hand embarrassment. It’s incredible. At the end of dinner, they kiss. Woo!

Back on the worst date in history, Shereè and Terry go out to dinner. Because Shereè literally does not have a fun bone in her body, she asks Terry again if he’s still having sex with his ex-girlfriend. Like, what?! I feel so bad for Terry. I bet Terry needs a hug right now.

In her follow-up meeting with Patti, Shereè explains that she casually spent the entire date accusing Terry of still sleeping with his ex-girlfriend. Patti is justifiably horrified. Unsurprisingly, we learn that Shereè and Terry haven’t seen each other since.

Sam, on the other hand, tells Patti he had a great time on his date, and that Kylie is definitely wife material. We learn the pair has been “seeing each other regularly.” YES. 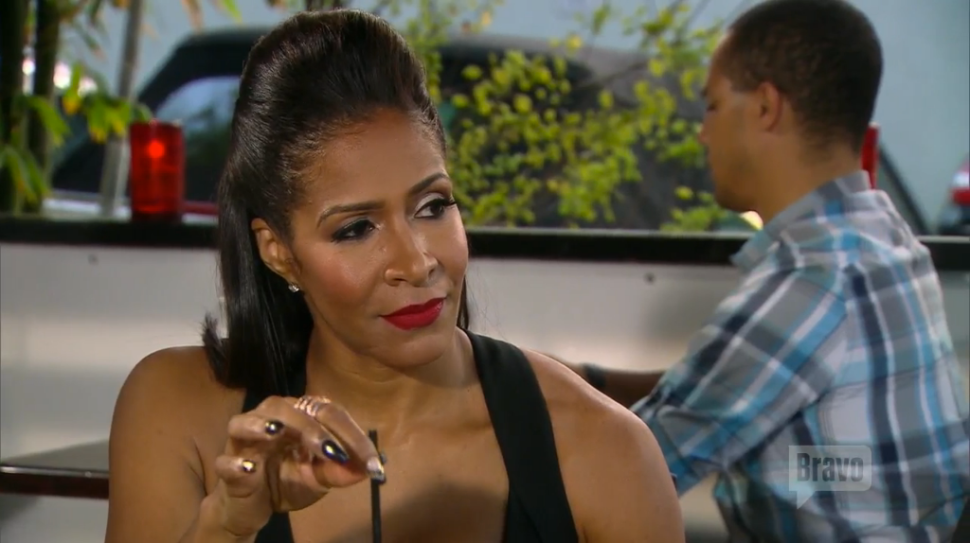