Coverage of documentary television series rarely, perhaps never, requires spoiler alerts. As for breaking news, such warnings would kinda defeat the purpose of the enterprise. Yet the social networks and comment threads of a nation convulsed with cries of outrage yesterday: Yes, a triple murderer was arrested and confessed to his crimes on tape, but if you reported on the matter, you ruined people’s Sunday night TV.

Hours before the finale of HBO’s true-crime series The Jinx was set to air, reports emerged that Robert Durst, the show’s subject and star, was arrested in New Orleans for the 2000 murder of his former friend Susan Berman, a killing last week’s episode tied him to in jaw-dropping on-screen fashion. When Durst himself was confronted with the handwriting evidence that linked him to the shooting by the filmmakers in the finale’s final minutes, he responded with a tepid denial on camera — and what sounded for all the world like a confession on a hot mic after the tape stopped rolling. “What the hell did I do?” he asked himself in the bathroom after the interview. “Killed them all, of course.” Fade to black. A work of non-fiction, ending with a line like something out of a screenplay.

Headline writers, understandably enough, couldn’t resist that quote, and sites from People to BuzzFeed to the mighty New York Times thereby dumped it straight into unsuspecting readers’ timelines. Many of them got pissed — equally understandably. Both the reporters who saw Durst’s apparent admission as newsworthy and the audience who greeted it as a powerful conclusion to an engrossing TV series were correct. The Jinx, it turns out, is a documentarian’s unicorn: a quest for the truth that, it seems, found it, and found it spectacularly.

They don’t make ‘em like that very often, though it’s not like they don’t try. Witness Serial, America’s previous true-crime fixation. Host Sarah Koenig revealed a host of inconsistencies and weaknesses in the successful case against Adnan Syed for the 1999 murder of his ex-girlfriend Hae Min Lee. But without an alternate killer to point to, Koenig began treating her own flip-flopping doubt and belief as the story rather than relying on the facts she’d uncovered and drawing a conclusion based on them —hardly too much to ask of an investigative journalist. Even before Durst’s conviction and arrest, and even given the personal relationship director Andrew Jarecki had to develop with the man to secure his participation, The Jinx made it pretty clear where it stood, from its sardonic title on down. 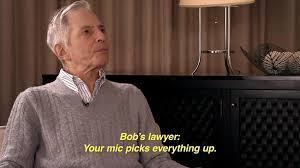 Alex Gibney, another of HBOs go-to documentarians, also has little trouble projecting a point of view. His Oscar-winning movie Mea Maxima Culpa explored the Catholic Church’s child-abuse scandal with subdued but righteous fury. Going Clear, Gibney’s forthcoming documentary about the troubled history of the Church of Scientology, is equally unsparing toward that institution’s alleged abusive practices. Yet while Gibney pulls no punches, he’s taking on social movements too big to be knocked out cold. It’s tough to walk away from those movies feeling positively disposed toward their subjects —that’s the point — but neither Pope Benedict nor Scientology Chairman of the Board David Miscavige have been led away in handcuffs because of them, let alone because of something they said while participating in their filming.

The makers of The Jinx themselves have a more inconclusive project under their belts, but the ambiguity of Capturing the Friedmans is revealing where Serial’s obfuscates. Co-directors Andrew Jarecki and Marc Smerling stumbled bass-ackwards into the lives of convicted child molesters Arnold Friedman and his son Jesse while profiling eldest Friedman son, David, for a documentary about birthday clowns. David’s obsessive home-video recordings of his family, both before and after the chargers were made, form the film’s spine, yet the you-are-there intimacy of it all makes it no easier to ascertain the truth of the matter. Rather, it shows how difficult it can be to separate guilt and innocence — how everyone’s guilty of something, and no one’s innocent of everything. Arnold was an admitted pedophile, but the incidents for which he was convicted may well have been the result of the child-abuse hysteria of the era. If that’s the case, David and Jesse’s continued loyalty to him could be considered admirable, but the fanaticism with which they closed their eyes to his admitted crimes, and their hearts to their long-suffering mother, makes it almost impossible to sympathize with them.

Framing a guilty man, defending the creep you happen to love: These are complex ideas, and Capturing the Friedmans presents them as such. It’s riveting, but it’s discomfort, not catharsis, that keeps you glued to the screen. The Jinx head-faked in a similarly shades-of-gray direction, making much of Robert’s black-sheep status in the mega-rich real-estate mogul Durst family, even implying that the organization might know more about the case than it has let on. But in the end, it slam-dunked its subject through the goddamn floor.

As such, The Jinx has much in common with true-crime journalism both highfalutin and broadcast-network broad. In many ways it’s the bizarro version of Errol Morris’s landmark The Thin Blue Line, which helped spring an innocent man from death row with a groundbreaking mix of flabbergastingly disarming interviews with the case’s principals and beautiful, minimalist reenactments of the different versions of the crime they describe. In terms of reenactment styles, the florid Jinx is the Goofus to The Thin Blue Line’s Gallant; it’s no accident that clips from the series’ recreations could be welded together into that True Detective-knockoff opening-credits sequence. But though the execution varied, the impressionistic approach is identical.

And in catching its key moments — the discovery of the envelope with the telltale misspelling of “BEVERLEY HILLS” that tied Durst to a near-identical note sent by Berman’s killer; Durst’s men’s-room confession — on video and audio, The Jinx is weirdly reminiscent of the late, lamented Albert Maysles’s Gimme Shelter. Intended to be a rock doc about the 1969 Altamont music festival, it wound up catching an actual murder on camera when hostilities broke out during the Rolling Stones’ performance, in such a way that the Hells Angel who killed a gun-toting audience member was eventually found to have been acting in self-defense.

But it’s just as much the spiritual sibling of America’s Most Wanted, John Walsh’s long-running anti-crime crusade in TV form. After losing his son to serial killer Ottis Toole, Walsh channelled his grief first into legislative lobbying, then into a series and tip hotline that famously helped authorities track down hundreds of fugitives. Aesthetics and narrative were not considerations, as the goal was simply to present information and ask the audience for help. The payoff, in the form of criminals caught, may not have been art, but it was certainly addictive — a little hit of justice, administered weekly.

The Jinx, by contrast, is a Belushi-sized speedball of shock and satisfaction. After nearly five full episodes that leisurely walk us through Durst’s life and crimes, it pulls an SUV with a vanity plate that reads “BEVERLEY” up on the curb and mows it all down. Suddenly a series that looked like a real-life black comedy about a man who got away with murder, equal parts horrified and helpless, reveals that it has the power to give that story a twist ending. It succeeds as art — which is ultimately what documentaries are — because the shift is so total and transformative, the final confession presented with such stark, chilling confidence. It succeeds as investigative journalism because it dug deep and hard until it exposed something that otherwise wouldn’t have been found. And if Durst’s arrest leads to a conviction in Berman’s murder (Durst has already been acquitted of killing his neighbor on self-defense grounds, and has so far dodged an arrest for the disappearance of his first wife decades ago), it will have succeeded in forging an alternate route to justice. That Durst’s hubris in agreeing to participate in the first place undid him simply adds to the sense of karmic retribution. At long last, the man who’s spent his adult life fighting the law and winning ran into people who were better at their job than he is at his.