We knew Janet and Gina were going to have a face-off this week about the Gamble sex rumors, and lo and behold, it’s the first scene of the episode.

“If I said I insist you walk out in front of that car, do you do it?” Gina asks, ever the one for sassy comebacks. “You’ve set yourself up to be run over.”

The argument ends with Janet storming out of the cafe—and perhaps, too, out of her 20-year friendship with Gina.

“I won’t bother with her again—terrible person,” Gina mutters. I’m said, because I love Janet and Gina and I just want everyone I love to love each other.

Elsewhere, where people actually have to work, noted Melbourne power couple Chyka and Bruce have a meeting about a new venue they’re putting together for a very Australian-sounding event called the “Spring Racing Carnival.” Honestly, I want to pay attention and figure out WTF a Spring Racing Carnival is, but I can’t focus on any of their conversation because OMG Bruce looks so hot in his business attire.

Next, Chyka and Bruce head to Olympic Park to meet with Aussie celeb Eddie McGuire and check up on the construction of their new events space. I’d totally be able to update you on the construction process if Bruce didn’t also look SO GREAT in his safety gear.

Janet has invited all the housewives for a trip to the golf course, which obviously means she and Jackie have to shop for new golf outfits. “I don’t like that whole preppy look,” complains Jackie, who’s known to prefer $4,000 lingerie.

Of course, the real purpose of the shopping trip isn’t coaxing Jackie into a sweater vest—it’s gossiping about Janet’s fight with Gina. Jackie is appalled that Gina is mad at Janet; in her eyes, all Janet did was tell the truth about rumors she’d heard.

“At the end of the day, you should always be truthful,” Jackie assures her.

In an odd segment, even by The Real Housewives of Melbourne standards, Gina’s having professional photographs taken because she just has, like, so many media requests these days. She solicits the help of Maurice Rinaldi, a photographer who’s done a bunch of Playboy shoots and “knows how to capture the essence of a woman,” according to Gina.

Creepy Maurice creepily flirts with Gina through the entire creepy photo-shoot—the entirety of which is shot, inexplicably, in Maurice’s creepy garage—but Gina’s apparently okay with it. “He gets away with saying things to me that a lot of other men wouldn’t get away with,” she tells the camera. Um…K?!

Onto something significantly less creepy: a double date between two of my fave couples EVER—Chyka and Bruce and Jackie and Ben! The fabulous foursome meets at a pop-up whiskey bar Chyka and Bruce casually shut down for the night. They sit in a nice-looking dining room and eat a bunch of cheese and meat and gossip, further, about the Gamble sex rumors. Chyka admits she was the one who brought up the rumors to begin with, but it was Janet who said the stuff about Gamble having worked as a stripper and a call girl.”

Jackie doesn’t get why Gamble’s so upset about all of this.

“She knows she’s not a stripper,” she says, “and even if she was, so what? At least you know how to give it!” Um, can I volunteer as fifth wheel at this dinner?

Finally, it’s time for Janet’s golf day. Janet surprises Jackie with a helicopter to the golf course, a) because Jackie’s the only housewife who’s firmly on her side, and b) because she’s classy as hell, everyone.

I’m not sure I can say the same for Gamble, who elects to wear this to the golf course:

Chyka and Gamble are the first to arrive, so Chyka—”Ms. Switzerland”—seizes the opportunity to apologize to Gamble for bringing up the sex rumors, to begin with. She kind of throws Janet under the bus, TBH: “I feel like I started the conversation, and therefore I have to take some of the blame for what happened,” she says, “even though I didn’t know where it was going to go to.”

But Gamble isn’t mad at Chyka at all—she’s mad at Janet, who she thinks invented the rumors in the first place.

Shortly after, Gina arrives. Her golf outfit is about as appropriate as the one she wore to play tennis last season.

Eventually all the ladies arrive, and it’s pretty awkward. Everyone’s being borderline-psychotically nice in an effort to conceal the tension surrounding the Gamble sex rumors.

Next, they actually play golf—or attempt to, rather. They’re all horrible. Like, not just bad. Horrible. Even Janet, who organized the golf trip, can barely hit the ball. Jackie’s swing is especially atrocious. Gina’s club somehow goes flying through the air. Are these women actually going to play a full 18 holes? If so, surprise! The rest of Season 2 is just the housewives trying to make it through a full round of golf.

Because no one’s actually capable of playing golf, the ladies evidently decide to fight, instead. It’s a five-way fight that’s hard to keep track of—Jackie’s saying Gamble and Janet should talk privately, Gina’s saying it’s none of Jackie’s business, Gamble’s saying the sex “allegations” were serious, and Janet’s trying to figure out if Gamble’s going to take legal action against her.

It’s almost as if no one really feels like having this argument, because in the end, Gamble announces she’s not going to take legal action, and Janet vows she won’t repeat rumors anymore. Everyone hugs each other and is totally fine again—almost as if the drama was scripted to begin with. Not that that’s the case, obviously, because the show has “Real” in the title.

After golf—did they ever even make it past the first hole?—the ladies get drinks and toast to putting differences to bed. Chyka announces she and Bruce are hosting an upcoming dinner party, and all the housewives and their partners are invited.

“At this stage, I don’t see why there should be a reason why anything should go wrong,” Chyka says, “but a lot can happen in a week.” TRUTH, GURL. 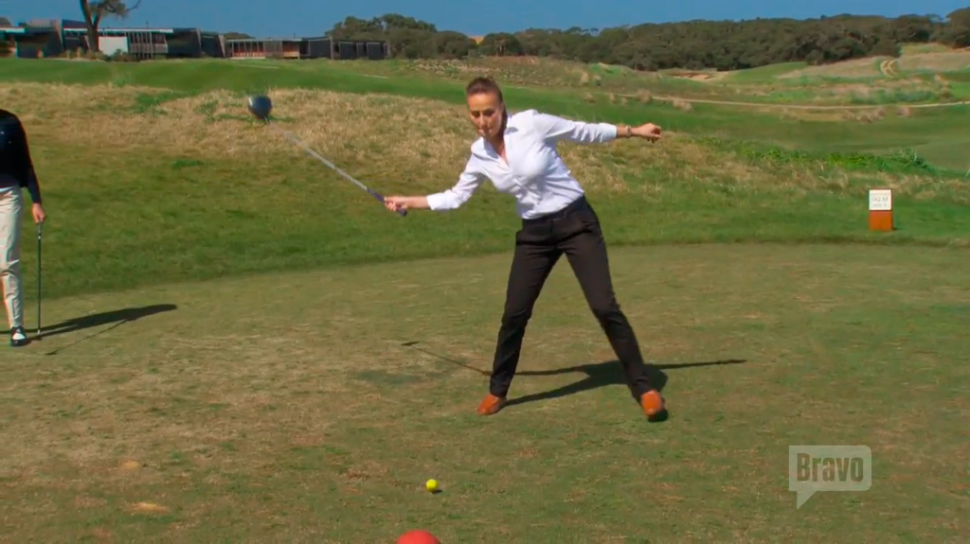