Our show opens with the “spare” to the throne, Cyrus, snorting coke in, what else, a red robe. He grabs a sword off the wall (as one does) and furiously walks down the palace hallway with King Simon in his sights. Without even turning around, Simon informs Cyrus that he will be postponing the referendum to see if Liam could possibly handle being King. Cyrus walks away without his brother’s blood on his hands.I gotta ask, what is Cyrus’ longterm game plan here? This isn’t The Lion King.Does he think if he kills Simon everyone will just be super cool with it and accept him as their new king? I’m not well versed in British law but I’m pretty sure that’s not how that works.

Cut to Ophelia and Liam having a romp in the sheets. But wait! Didn’t she tell him that she couldn’t see him anymore? She did and twist! That’s not Ophelia! That’s not even Gemma! It’s a blonde supermodel. Poor Liam can’t even focus on supermodels; he’s so sad over losing Ophelia. Womp womp.

Continuing their partnership from last week, Ophelia and Eleanor are texting about getting the dirt on Jasper. The director of this episode is even kind enough to show the audience their conversation with a typo included! How relatable! We see that Jasper and Eleanor are still sleeping together despite their twisted little blackmail game. Jasper tells Eleanor she’ll have a hard time pulling one over on him because he’s from Las Vegas and his parents were grifters. And we all know that when you’re from the mean streets of LV, you’re the king of blackmail…right? Is that what we’re supposed to infer from that?

Ophelia is still getting hounded by paparazzi despite the fact she and Prince Liam are no longer an item. As she tries to avoid them, she is saved by Nick, a handsome fellow student. He rides a motorbike and has great hair, so you know he’s going to be sticking around for a minute. She doesn’t offer up where she lives to him right away because she is embarrassed about living in the palace. He is persistant and eventually resorts to using Google (presumably for the first time) to find out why the paparazzi care about her. He lets her know he doesn’t care about competing with the Prince for her affection by jokingly giving her a pair of Groucho Marx sunglasses to fool the paps. It seems his move is just charming enough to keep him around for at least a few more episodes.

Now to the main event of the episode: Fashion Week. Queen Helena is determined to make Fashion Week a success and present a good image of the monarchy to the public. She insists that King Simon wear his royal military clothes as opposed to the Alexander McQueen suit he desperately wants to wear. Seriously…he mentions McQueen at least three times. King S has his couture preferences, dammit! The Queen wants to wear purple but hold up! Princess Eleanor is wearing purple. Eleanor calls “baggy”  which is the British version of “dibs” and is also apparently as good as law. QH is not pleased about this development and tears her daughter down with an insult so bad that I assume every psychologist watching this show got a boner. “You do nothing. You contribute nothing. And when this [the monarchy] all goes away, you’ll be nothing.” Yikes!

The epic burn gives Eleanor the motivation she needs to do something with her life and decides that she wants to plan her own fashion show on the same day as Mommy Dearest’s. They agree to let the press decide who’s show is better and each begin plotting their takedown. Revenge really can be the best motivator. Game on, Queen!

Meanwhile, King Simon begins Liam’s King training. They attend various meetings and meet with royals from other countries. Liam seems utterly bored and the King admonishes him for showing up to their first meeting late and hungover. Ugh, c’mon Dad! He’s going through a break-up! You’ll never understand him!

Eleanor convinces Liam to blow off some steam by going out partying and drinking massive amounts of liquor. Gemma eventually joins up and the three do shots. The party leads to Gemma and Liam in a car together; Gemma driving and Marcus (Liam’s bodyguard) in the backseat. Gemma insists she’s fine to drive but soon foregoes that and instead decides that it’s a good time to..ahem…service Liam. As anyone with half a brain could guess, this does not end well and the car ends up plowing through a red telephone booth. How British! Gemma cuts her head open while Marcus and Liam appear to be fine. Liam refuses to leave Gemma despite the fact that there is an “extraction plan” in place for events such as these. Eleanor and Jasper arrive on the scene and Jasper proceeds to knock Liam out to get him out of the situation. Gemma says it’s fine and the royal kids are on their way.

Meanwhile, Helena plots to find out what Eleanor has planned for her fashion show. She employs Cyrus’ help and he blackmails his daughters into revealing what Eleanor has planned. How does he blackmail them (remember, they’re his daughters), you ask? HE WALKS IN WHILE THEY’RE GETTING THEIR REAR ENDS WAXED AND TAKES A PICTURE. He asks if they will be modeling Ed Hardy buttplugs in the fashion show. Meeeeee-ow! Asking if their modeling for Ed Hardy is really just salt in the wound…or should I say, hole. Tweedle-Dee and Tweedle-Dumbass (Queen’s words, not mine) obviously give up the information about where Eleanor is holding her show.

The Queen thinks she has Eleanor cornered and calls “baggsy” on the location. Eleanor reveals that this was her plan along and she always wanted to hold her show in the palace. King Simon reminds Helena that she is in fact, a mother, and should maybe act like it. She retorts that Eleanor needs an advesary more than a mother. Does she though? Does she?

The fashion shows square off and frankly, they are both giant snoozefests. Eleanor uses blacklight makeup on her models so they look like skeletons at the end of the runway. Helena’s models…look like models. Eleanor’s show ends with a standing ovation and fantastic press and Eleanor soaks up the praise and approval like a sponge. Her glow is shortlived though when we find out that Helena coerced the press to print all of the praise. “When you succeed, the monarchy succeeds.” Eleanor is devastated and Jasper comforts her. I’m beginning to really root for the two of them, despite all of the blackmail and backstabbing and general mystery surrounding Jasper. Is he British? Is he from Las Vegas? Is he an orphan? He’ll never tell!

And finally, the males of the monarchy square off. Liam lies to his father about being in the car with Gemma and King Simon voices his approval of Liam’s actions. Simon lets Cyrus know that Liam will be accompanying him on the “plane tour” because it’s more important for Liam to gain approval with the people than it is for Cyrus. Cyrus is obvi pissed (his go-to emotion) and informs his nephew that he knows he lied about being in the car with Gemma. He compares Liam to himself; sleeping around, drinking, lying. “I’m nothing like you” Liam retorts and it seems a new set of adversaries have been formed.

The episode concludes with Simon once again admonishing Queen Helena for being a terrible mother.

“You need to be better to your children. We may not always be a monarchy, but we will always be a family.”

“It’s a little late for that.”

So, I’m guessing this means we should all cancel our nominations for Queen Helena as mother of the year? Copy that. 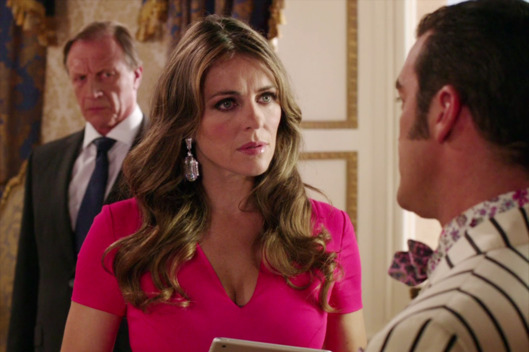