This recap is entitled “Fight the Bitch” because in our second episode of The Royals that’s what it seemed like everyone was doing whether they knew it or not. And also because, in my opinion, it is the best line so far in our two episode series.

Eleanor was fighting Jasper (the proverbial bitch in this case) for her dignity and for possession of the sex tape that he is still lording over her head. We find the two of them in bed together and Eleanor attempts to get ahold of Jasper’s phone by straddling him and reaching across his face. Why she didn’t just get off the bed and walk over to the nightstand is beyond me. Ethan Hunt would be so disappointed! She obviously gets caught and we find out that despite the blackmail, she and Jasper are continuing to have sex. She may never be Queen of England, but she’s definitely already Queen of the Mixed Messages.

The main bitch that literally everyone and their fathers are fighting is Queen Helena. She is determined to see that a) the referendum to decide whether or not to abolish the monarchy never happens and b) Liam ends up with a respectable, “posh” wife. Enter Gemma; Liam’s ex-girlfriend and “first love”. She first appears as a blonde, scantily clad vision in Liam’s room and informs him that she wants him back and will literally fight Ophelia if she has to. You gotta give the girl props for knowing what she wants.

This episode also introduced us to Ashok, Liam’s best friend and reciter of Prince lyrics. We really didn’t get to know much about Ashok but he’s featured in cast photos so I assume at some point we’ll be asked to care more.

Helena throws a garden party for members of the British military and expects her children to behave as one is expected to behave at a garden party. To Eleanor that means lighting a joint in the middle of the crowd and ignoring everyone and to Liam it means crowdsurfing (? a bizarre choice). Liam invites Ophelia to the party and Helena invites Gemma. Once again, bitches be fighting! They weirdly hit it off though and Ophelia invites Gemma to partake in a drinking contest. I know we’re only two episodes in, but I feel like everything we really know about Ophelia so far is that she likes art, drinking, and her mom is all sorts of dead. More character development, please!

Gemma ends up drinking Ophelia under the table and Ophelia passes out in the middle of the garden party and in the middle of an actual garden. Baby girl, you gotta pull it together! Liam walks her upstairs and she confesses that the only reason she initially slept with him was for the story. She ends it with him; essentially conceding to Gemma after less than 24 hours. In a tender moment during their goodbye, she tells Liam that she believes he will make a good king.

Meanwhile, King Simon is off chatting with the servant girl whose name, we learn, is Prudence. She also happens to be the same servant girl who was the Monica Lewinsky to Uncle Cyrus’ Bill Clinton. King Simon spends the party helping her make fruit tarts…real thrilling stuff.

But wait! Amid rumors of death threats that the family seems to shrug off, we see Prudence pulling a gun (!) out of her purse and staring at it. Was she going to shoot the King? The Queen? Is Ophelia’s Dad so bad at security that he doesn’t even do a bag check before people enter the castle? I have to do a bag check every time I walk onto the Warner Brother’s Lot in Burbank and the only royalty there is the orange couch from Friends.

Uncle Cyrus is his usual creepy self at the party and eventually corners James Holloway (an influential member of parliament) and seduces him with cocaine and a condom on a silver platter. Remember kids, when you use sex for blackmail, always make sure that it’s safe sex. After they finish, Cyrus threatens to expose James’…shall we say…homoerotic tendencies unless he helps Queen Helena when it comes time for the referendum. Sidenote: Has anyone else noticed that Cyrus is always wearing red? He is giving me real Satan and/or Him from The Powerpuff Girls vibes.

Bored of the world, Princess Eleanor finds herself flirting with an Olympic swimmer who also happens to be Jasper’s personal hero. She brings him back to her room where Jasper is forced to stand outside and listen and make sure the crazy people (cough, Prudence, cough) don’t try and kill her. Right before swimmer goes into Eleanor’s room, he tells Jasper that he loves being an Olympic swimming hero because that means he gets to sleep with “sluts” left and right. Have I mentioned that he was a swimmer? The sluts comment makes Jasper angry and he may or may not have killed the swimmer. So even though Jasper was the bitch before, in this situation, I gotta say the swimmer is the bitch. So many bitches.

Okay, WHAT is Jasper’s deal? Does he love Eleanor? Does he actually care about her? Why is he faking having a British accent? Who styles his eyebrows? So many questions, yet so few answers.

Queen Helena returns to her room and finds an open and seemingly empty bottle of perfume. What does it mean?! It means that there’s a handsome Captain named Lacey in the room and he decided that was the best course of action for getting the Queen’s attention. They kiss, tell one another that they love each other, and then he escapes out of a secret door (!) in the wall of her bedroom. I feel we will be seeing much more of Captain Lacey mainly because you already know Queen Helena is going to want to get hers.

And finally, we see Eleanor consoling a clearly hungover-even-though-it’s-still-light-out Ophelia. She cracks an egg in a Bloody Mary and asks Ophelia for some help. I’m assuming it’s either to vanquish Jasper or to borrow some eye make-up remover. Could go either way.

Liam asks King Simon to hold off on the referendum because he (cough, Ophelia, cough) believes he has what it takes to become King and Simon agrees. Which is good because if they held a referendum now and the monarchy was abolished, that would be a pretty crummy way to start a series called The Royals.

Will Prudence follow through on her death threats? Will Cyrus wear literally any other color or are we forced to endure another red plaid jacket? Will King Simon ditch the monarchy and become a guest judge on Cake Boss? How many other handsome men are going to slip in through the Queen’s back door?

I suppose us commoners will have to wait for The Royals next week to find out. 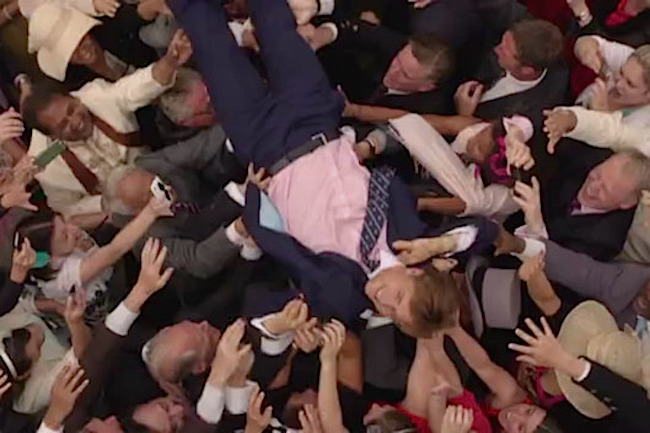