“They’re young… they’re in love… and they kill people” goes the tagline for the 1968 film Bonnie and Clyde, but the slogan could apply almost as well to the outlaw pair at the center of the Metropolitan Opera’s white-hot revival of Massenet’s Manon.

Now, strictly speaking, the protagonists of the 1884 romantic tragedy don’t kill anyone but themselves, and they don’t rob banks either. Instead, the opera tells of the on-again, off-again affair of Manon, a 15-year-old country girl on her way to become a nun, and the Chevalier des Grieux, who’s only a year or so older. Ordinarily the extreme youth of these characters gets blurred in productions of the opera, but soprano Diana Damrau and tenor Vittorio Grigolo, in two of the most electrifying performances of the Met season, enacted a pair of hormonal teens trapped in codependency.

Manon is not exactly a rarity: over the last couple of decades I’ve seen performances at the Met with Catherine Malfitano, Diana Soviero, Renée Fleming, Ruth Ann Swenson and Anna Netrebko in the title role. But Ms. Damrau’s take on this popular diva vehicle totally opened my eyes; it was as if I had never seen the opera before. Working with a less than ideal voice for the part—on opening night March 9 her lyric coloratura sounded skimpy in a few of the more passionate phrases—this artist created a clear-eyed portrait of sexual manipulation.

This wasn’t just a matter of acting, though Ms. Damrau played the role with sizzling, unsentimental intensity. She sang the part with a vast range of dynamics and color, from the simple, almost childlike “Adieu, notre petite table” as Manon prepares to abandon her lover, through the showoff coloratura of the Cours-la-Reine scene, when she has become the most celebrated courtesan in Paris. For her St. Sulpice aria, in which Manon seduces des Grieux away from his religious vows, she refined her tone down to an insinuating whisper; later, at the moment when she was arrested as a criminal accomplice, she hurled out a titanic high D that shook the vast Met auditorium.

Perhaps her most interesting singing of the whole night, though, was in the gentle, lulling phrases of the final scene. The dying Manon confesses to her lover, “You are the only love of my heart, but until today I never realized how good you are. How could I have betrayed you?” Every other singer of this part in my experience has turned wistful, even self-pitying when she sang this melancholy melody. Ms. Damrau’s Manon, without sacrificing even a glimmer of vocal beauty, found something deeper: bitterness and self-hatred at how carelessly she has squandered true love. At the moment of her death, the amoral girl grows a conscience, and the sense of lost opportunity is heart-rending.

Matching her intensity and at times even topping it was Mr. Grigolo as the hopelessly fascinated des Grieux. At age 38, he moves on stage with the feverish energy of a boy half his age, and his pop star handsomeness somehow makes the tragic story all the more poignant. It seems like a crying shame to wreck something so radiantly lovely.

But more to the point, he sings this part like an angel, pouring out fervent throbbing tone at the climax of the chevalier’s tormented aria “Ah! Fuyez, douce image” and murmuring “Le Rêve,” his impossible dream of a happy life with Manon, in a mezza-voce so delicate you want to reach out and caress it. No, he’s not the most nuanced artist, but even his most excessive moments—for instance, screaming like a wounded animal at the moment of Manon’s death—are forgivable, even commendable, in their utter sincerity.

The constellation of men surrounding Manon included the bubbly, tart-voiced tenor Christophe Mortagne as Guillot, the decadent old millionaire, and the velvety bass Nicolas Testé as des Grieux’s protective father. His angry entrance in the gambling scene thundered like the curse of an Old Testament God.

In a score that tends to meander, conductor Emmanuel Villaume kept the rhythms tight and emphasized the darker, more tragic colors of the orchestration. When this production by Laurent Pelly first played the Met in 2012, it came in for a good deal of criticism not only for shifting the action from the original 18th century to circa 1900, but for its flimsy, dollhouse-like sets. This time around, though, the concept seemed suddenly to come into focus: so immature and self-centered were these lovers that it seemed only fitting they should inhabit a world constructed of pasteboard.

This Manon is musical drama the way it’s meant to be: dazzling, heartbreaking, haunting. If it doesn’t turn out to be a hit for the Met, the company might as well close its doors, because opera as we know it and love it must be officially dead.

The negative side of so magnificent a performance is that it reminds you that most nights at the Met—in any theater, really—verge on the mediocre. So it was with a revival of Lucia di Lammermoor on March 16. The potential luster of this performance was dimmed by the compromised vocals of Joseph Calleja as the ardent Scottish knight Edgardo di Ravenswood. An announcement before the performance indicated he was suffering the lingering effects of flu, and indeed in the first act his shimmering lyric tenor sounded cloudy and fragile. He recovered sufficiently for a poetic death scene, though earlier on he tiptoed around the part’s high notes.

And yet Mr. Calleja gave the most satisfying vocal performance of the night, phrasing with a noble legato and declaiming the text with poetic imagination. Opposite him, soprano Albina Shagimuratova should have made the perfect partner as the doomed Lucia: their voices share a fluttery, silvery quality reminiscent of the bel canto singers of a century ago. But her singing, though impressively accurate, sounded square and prosaic, and her stolid stage presence suggested more a prosperous widow than a high-strung maiden who descends into madness.

Maurizio Benini shredded Donizetti’s score with a multitude of tiny traditional cuts, so the only real takeaway from the evening was a reminder of the necessity of restudying this type of classic opera with new stagings. Mary Zimmerman’s 2007 production, once vivid with subtle character touches, has declined into a bland example of “stand and sing.”

That said, casting Ms. Damrau and Mr. Grigolo in this opera could well jump-start it back into vivid life. I’m more than willing to give it a try. 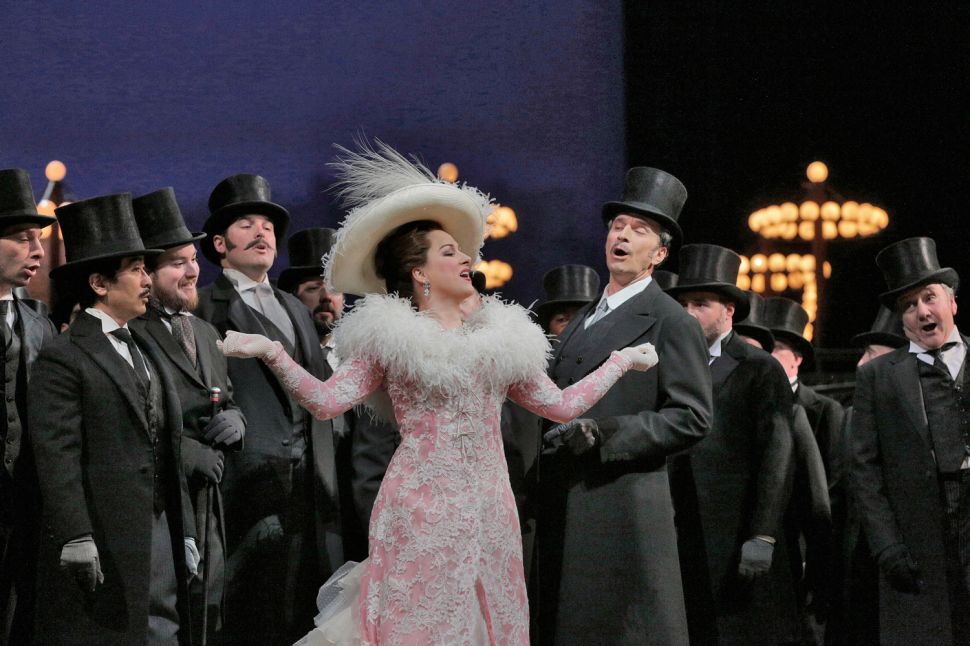