A couple days ago, David Lynch apparently hinted that the Twin Peaks reboot, set to air on Showtime in 2016, wasn’t a done deal, saying it is still “up in the air” and there are “complications.” The internet responded thusly:

Showtime, as you would expect, caught wind of Lynch’s statements and was like:

“Nothing is going on that’s any more than any pre-production process with David Lynch,” a source told Entertainment Weekly. “Everything is moving forward and everybody is crazy thrilled and excited.”

Basically, it looks like David Lynch is just being David Lynch, which means saying a bunch of stuff that means nothing to anyone but him. That’s not even an insult. David Lynch just operates on a different plane of human thought than most people, and that plane is somewhere I don’t particularly want to visit. Probably has fantastic coffee, though.

Now let’s just hope that what the source said is correct, but ALSO that it isn’t hinting that Showtime could move forward without David Lynch. Because Twin Peaks without David Lynch quickly turns into Season 2 Twin Peaks, and that’s the one with Catherine dressed as an Asian Man and that dude that plays chess. And with Lynch (allegedly) all set to direct all nine episodes of the reboot, he is kind of important to this whole process just from a technical standpoint.

So, to recap, Twin Peaks reboot with David Lynch involved:

And Twin Peaks without David Lynch:

What I’m saying is, no one really knows anything, people are conflicting each other, and really the only thing Twin Peaks fans can do is attempt to hold on to their sanity and sometimes look at amusing GIFS. Which, really, is a great metaphor for watching Twin Peaks. 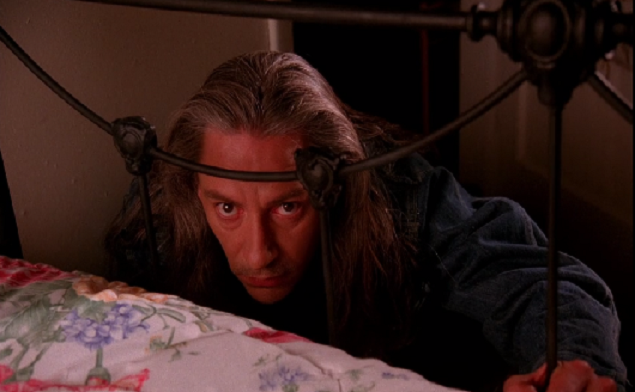