The pattern should be very clear by now: Team Rick finds a location or community that looks like it might provide them with some shelter and protection. But something’s rotten in the state of Denmark. Evil, in one form or another, lurks in the shadows. And soon enough, they are embroiled in conflict and eventually back out on the road again.

Woodbury, with its dark secrets. Herschel’s farm, a peaceful idyll broken by the horrifying revelation of the contents of its barn. Even the supposedly abandoned prison hid a few surviving convicts, not to mention a deadly plague. Terminus, obviously. And so on.

Its no wonder that Rick and his motley band are skeptical of this new situation in Alexandria. Fool me once, and all that. This protective paranoia is a reflex for them at this point.

That’s what last night’s episode, “Remember,” was all about. It almost presents itself as a kind of conditioning experiment: Take some domesticated animals and put them in a literal dog-eat-dog world for two years, until they become snarling, feral beasts. Then insert them into a safe, loving home and ask them to become good house pets again. Chances are they’ll pace their new homes like they’re cages, slavering and twitching. Chances are they’ll turn and bite their new hosts.

That’s the arc that The Walking Dead seems to be tracing here, the evolution of Team Rick from victims to survivors to something that looks a lot like predators.

Not everyone responds the same way, of course. Daryl obviously and brazenly chafes at the leash, while Carol pretends to go from zombie-genociding badass to meek suburban housewife faster than you can say “sweater set.” Carl, with the adaptability of his youth, seems to have his head screwed on straighter than pretty much anyone else: He likes the community but doesn’t trust their weakness, and is afraid they’ll become fat and weak if they stay.

But in the end it’s Rick who calls the shots and carries the show’s main themes. And when he says at the end of the episode that if Alexandria is too weak to help them survive, they’ll take it by force, we’re meant to sit up and think, “Wow, this is somebody new.” Not just because he has a clean-shaven face for the first time in years (did you forget that it was cleft-chinned Andrew Lincoln under all that fuzz, because I sure did), but also because we remember the moral, centered dude he was when he last looked like this, and this version of Rick is clearly a totally different person.

Clearly, the show has a lot riding on this theme, if it is willing to sacrifice the likability of its protagonists, and a large degree of the audience’s sympathy along with it, to advance it this far.

How risky a gamble that is remains to be seen. But for it to really work, we have to know whether Alexandria really is the normal, safe place that Rick can’t make himself believe it is. And that’s where we get into trouble.

See, Alexandria is obviously a good place. In case it wasn’t clear enough from the plentiful food and hot showers, the bright open spaces and generally happy, clean-cut people, the town is led by Tovah “America’s Bubbe” Feldshuh. Seriously, the worst I can imagine this woman doing to them is overfeeding them or pinching their cheeks too hard.

And yet the way the scenes in Alexandria are written and shot, it seems like there must be something wrong. It is as if the creators of the show have been infected by the same paranoia that afflicts Team Rick, and they can’t seem to help making Alexandria seem weird and ominous, even though it so clearly isn’t. So we get the husband of Jessie, the hot woman who cuts Rick’s hair, smoking ominously on his porch. We get Enid, the stoic teenage chick Carl seems interested in, sneaking off beyond the walls. And so on.

The thing is, this is just a reflex of the show, making everything seem creepy, rather than a real sense that something is wrong. If you strip away the creeping dread, there is nothing much out of the ordinary about a jealous husband or a sneaky sullen teenage girl. The patrollers who Glenn tangles with are really just bros blowing off steam. The portentous-sounding “jobs” that Bubbe Feldshuh gives them turn out to be good, appropriate jobs.

If anything, the only really weird, ominous aspects of Alexandria are all down to Team Rick. Carol’s fake, plastered-on smile. Daryl lurking around, still unshowered. The fact that they decide to spend the night sleeping all together in one room on the floor even though they have their own McMansions.

These behaviors may be understandable—feral dogs and all that—but they’re still much creepier than anything else inside the gates. It appears, at least, that Alexandria is placing far too much trust in them. Especially in Rick, whom they go so far as to name constable.

Of course, unless the show really aims to turn us against Rick for good, the real threat in Alexandria can’t be from him. And we’ve still got several episodes until the season ends. We don’t know where Enid is sneaking off to. Or who took Rick’s hidden gun. So perhaps there is a real looming danger after all. It would certainly fit the pattern. 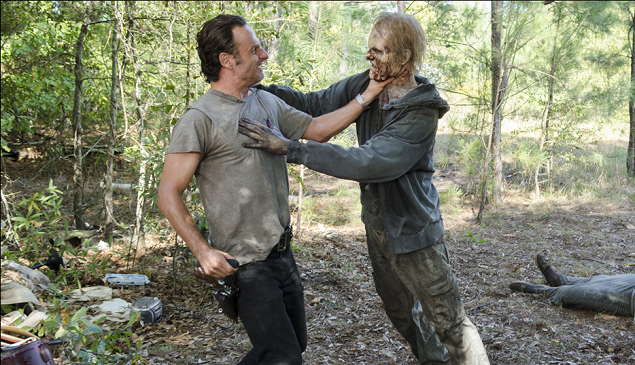