While watching The Walking Dead last night, I found myself asking something I have often wondered: Who is the ideal viewer of this show? Who is this imaginary fan that the writers have in mind when cooking up the next plot twist?

Is there actually someone out there who thinks, “Yeah, I like watching zombies, but what I really want to see is the slow psychological transformation of characters whom I have come to respect and care for into evil, nasty, brutish people”? I just find it hard to believe.

The thing is, I actually really liked this episode a great deal (especially as compared to the three clunkers that preceded it). The Walking Dead is back to its old tricks in terms of subtle symbolism (that letter A!) and careful plotting, and the change is palpable. The scenes in which Rick and Carol really bare their teeth and show just how much they’ve changed as people are fairly brilliant, both in the writing and the acting.

But that still doesn’t do much to alleviate my concern over what it all means for the direction of the show as a whole. The Walking Dead rises or falls on the question of what it means to be a good person in a world gone mad. If we lose faith that our heroes at least want to do the right thing, we don’t really have much left to hang on to.

Anyway, if we accept their premise—that a few members of Team Rick need to remain secretly armed—then at least all the bad things that Carol does follow logically. Of course, why they feel this need is never fully spelled out. It seems that they are less worried that the Alexandrians are going to suddenly turn on them, and more concerned that an attack will arrive from the outside, and then the weakness and unpreparedness of Alexandria will make it necessary to fight their way out and/or impose their own martial law. But how having two extra handguns in Carol and Rick’s possession (especially since Rick, as the constable, already has a pistol in a holster on his belt) will protect them against this is unclear. Daryl basically tells them as much when turning down a gun at the end of the episode.

In any case, once they are set on that path, it does make sense that Carol, who has cleverly hidden her true badass nature under the façade of her former meek housewife personality, would be the one to sneak into the gun locker. She is, as she says, invisible—which only serves to remind us of just how hardcore she really is, since last time she was “invisible,” she dressed up like a zombie and blew up Terminus with fireworks.

And then when she gets caught stealing the guns by Jessie’s innocent little son Sam, it does follow that she has to threaten him with a fate worse than death if he exposes her. The alternative would be to sacrifice any chance of staying in their new fortified home.

Nevertheless, it is shocking to see formerly nurturing Carol—who had a daughter about Sam’s age, who taught the kids in the prison, who agonized over what she had to do to Lizzie—coldly and calmly threatening a child to his horrified face.

What doesn’t follow from their plans, on the other hand, is Rick’s flirtation with the married Jessie, which seems guaranteed to blow up in everyone’s faces. It’s reckless and dumb, it does nothing to help their cause, and it is fairly out of character for Rick, considering all of the love-triangle drama with Shane back in season two. But Rick has this weird look in his eye like he did when he was hallucinating back at the prison, and he seems hell-bent on going to a very dark place yet again. Why the show thinks we want to go there with him, I have no idea.

But it’s nowhere near as dark as where they’re taking Sasha, it seems. Never the most centered character to begin with, Sasha has now lost her boyfriend and her brother in quick succession, and is just PTSDing all over the place. Even more than borderline-feral Daryl, she is chafing at the calm, peaceful and normal-seeming Alexandria, which feels to her like just another prison.

In the episode’s opener, she takes the family photos of the dead people in whose house she’s living out to the woods for target practice. Hoping that there is still some justice or meaning in the world, she is dismayed to find that she is not punished in any way for desecrating the memory of the dead.

Just needing something else to shoot, and to distract her, she requests a position as the town’s sniper/lookout from the town’s bubbe/mayor Deanna, for which Deanna extracts a promise to attend her welcome party that night. But while the rest of Team Rick is able, with varying degrees of success, to put on happy faces and at least pretend to have a nice time, Sasha cannot stand the idea that this is a place where people have the luxury of small talk, and she completely flips her shit. As she snits to Deanna the next day on her way out if town, presumably to shoot more stuff: “This place isn’t real.”

Meanwhile, Daryl, who we were all expecting to react similarly, actually ends up having the opposite response. He can’t even bring himself to go to the party, but he does spend the day bonding with Aaron.

The two of them find a horse that has been spied in the area around Alexandria. But nobody has been able to tame it. As Daryl says, “The longer it is out here, the more it becomes what it really is”—i.e. a wild animal. Daryl nearly coaxes it into letting him bridle it, but then zombies appear and scare it off. Eventually the zombies take it down, and Aaron is forced to put the poor creature out of its misery.

“He always ran,” he says sadly. Daryl responds: “You were trying to help him.”

You could think The Walking Dead is getting a little too cute with the symbols again—as soon as you try to save the wild creature, it remembers what it was like to be tame, and is killed for its sudden weakness. Just like Team Rick is scared the new luxury of Alexandria will make them vulnerable.

But Daryl makes a conscious choice to see this metaphor another way—the way Sasha can’t, or even Rick. If the horse hadn’t been so skittish, after all, they could have brought it inside the walls, where it would have been safe.

Aaron sees this dawnig understanding in Daryl. Where everyone else just sees a guy who sat on the porch disemboweling a possum with a hunting knife, he sees a sensitive and intuitive person. And so he offers Daryl a job as Alexandria’s new recruiter, because he realizes that Daryl—again, unlike Rick—really can tell if someone is good or bad. And Daryl agrees, because he “ain’t got nothing else to do.” And probably also because the job comes with his very own motorcycle. 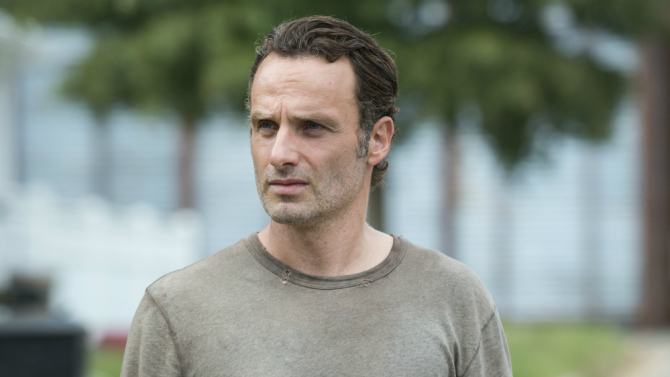