Could there possibly be a better metaphor for The Walking Dead as a whole than being trapped in a revolving door?

It’s perfect: Going around and around, revolving again and again, from moments of illusory safety to moments of sheer terror. You’re safe in there, for a second, but push on one element, just a little bit, and everything swings the other way. And then someone is eating your face.

After two weeks of relative peace and comfort in Alexandria—minus the occasional gun theft, illicit attraction or horrifying threat against a child—the balance there is starting to be upset, the door pushed open just a bit and the slavering zombies are reaching their hands in yet again.

Team Rick has been proving extraordinarily skillful in all of the ways that Deanna and the Alexandrians had hoped when they brought them inside the walls. A bit too skillful, perhaps.

When a fairly routine trip out to the local construction site—they’re gathering materials to expand the walls—goes pear-shaped, the veterans on the detail start panicking. They nearly leave one of their own behind to save their own skins, till Abraham rides in as a one-man cavalry, killing a horde of walkers with a makeshift mace and being just generally badass.

So the erstwhile head of the group, Tobin, does the right thing and steps down. Abraham has the skills to be an effective leader that he doesn’t, he tells Deanna, who turns to Maggie and frets that Team Rick is taking over all the positions of power in Alexandria pretty quickly. Maggie just notes that being outside of the walls so long gives you skills that Alexandria needs.

Like the skills of Glenn and Tara, who are so clearly superior to Aiden and Nicholas at making supply runs it would be laughable if it weren’t so dangerous. The four of them haul a protesting Eugene—who has by now formulated a truly stunning self-justification for his cowardice—to a warehouse to find equipment to repair Alexandria’s failing power grid.

That’s where Aiden’s cockiness finally catches up with him. He decides to keep shooting at a zombie wearing body armor, exploding the oxygen tank on its back, impaling himself on a spike, giving Tara a massive headwound, and letting free all of the walkers caged inside the warehouse.

Despite their attempts to save him, he dies, but not before admitting that it was his and Nicholas’ panic that led to their other team dying, not theirs. Surprising approximately zero Glenns or anyone else who has been paying attention.

So it is also no surprise that, after getting trapped in the two sides of that utterly symbolic revolving door, Nicholas panics again and gets someone else killed. Eugene, suddenly finding his inner hero after all this time, manages to lure the walkers away from the front of the building. But of course, opening one side of the door to freedom would expose whoever is in the other side to the walker horde.

It looks like one of those tough moral quandaries that this show is so fond of, but Glenn cuts right through that bullshit, Gordian knot style, by trying to bust the glass with the butt of his (ammo-less) gun.

That’s where the metaphor gets really good: Glenn is using his skills and ingenuity to finally get them out of the revolving door, out of round-and-round life, where some people just live and some die, and that is how it works. Breaking that glass, breaking out of both sides of the door saving everyone, that’s the promise of a real, stable life in Alexandria, where Noah learns from Reg how to be an architect, and builds up the city, and grows old behind its walls.

Instead, though, the weakness and stupidity of the veteran Alexandrians, in the person of Nicholas, assures that they’re just going to stay spinning around and around, and just keep on dying. Impatient that Glenn hasn’t broken through in three tries, he goes for his gun, pushing the door open and letting the walkers grab Noah.

On a show with its fair share of gruesome deaths, this may have been the most grisly yet. And Glenn has to sit there and watch behind the glass. It’s devastating and effective.

Echoing Tobin at the construction site, Nicholas is also ready and willing to leave a man behind to save his own ass, so Glenn just knocks him out and stuffs him in the back of the van with the unconscious Tara. Who knows what kind of reception they are going to get from Deanna after all of this.

Especially since Father Gabriel, who has been conspicuously off-camera for the last couple of episodes, now pops up to sow the seeds of doubt in Deanna’s mind. It’s never been quite clear where Gabriel’s loyalties lie, and now we know: the things he has seen Team Rick do, like killing all of the Terminans, has turned him permanently against them. You’d think realizing they were cannibals would have tempered this opinion, but apparently not. He wants Deanna to know that bringing them to Alexandria was a mistake. And after she finds out about Aiden, we have to assume she’ll be more receptive to such advice.

Meanwhile, Rick and Carol are doing nothing to advance their cause. Carol sees no more reason to pretend to be miss sweet little housewife with Jessie’s son Sam, now that she has threatened his life. But he won’t take go away for an answer, attracted to Carol’s toughness more than he is her cookies. And with her former battered wife’s intuition, Carol realizes that Jessie’s husband Pete has been beating her, and possibly Sam too.

She brings this conclusion to Rick, who has reason to believe her: Pete swung by the constable’s residence for a beer and a little friendly intimidation earlier that day. And Carol tells Rick that he’s going to have to kill Pete. Because when all is said and done, Deanna’s dream of having a real community, with real law and order, is still just a dream. They’re all caught in that revolving door of the new dog-eat-dog world, no matter how strong those walls are. 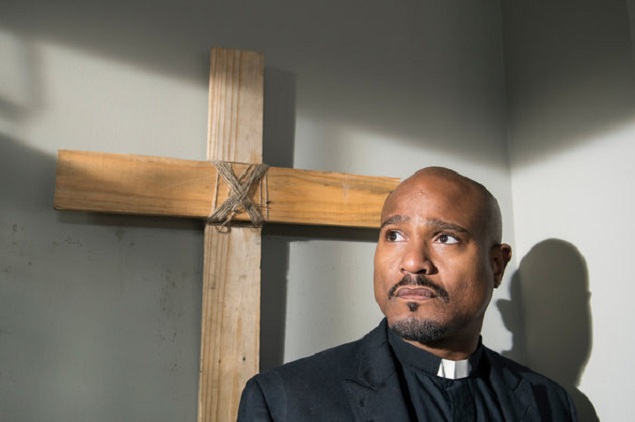