Ice cubes in the smoothies. No soda. Fork, sans pork.

Congressman Charles Rangel, the 84-year-old Harlem Democrat, lent a few kernels of dietary wisdom in his home district today, encouraging Americans to adopt his 30-day “Rangel Resolution” to eat healthier meals. Mr. Rangel, slimmed down from his days as a portly power broker, declared obesity a “silent killer” and a threat to national security.

“It’s really reaching a dangerous proportion that really threatens the security of the United States of America,” Mr. Rangel said at the West Harlem Community Food Health Hub. “And you may ask, ‘Well, it can’t be that bad?’ Well, it is that bad because so much of what we have goes into education and healthcare.”

“Billions of dollars is spent just on people who are sick who didn’t have to be sick,” he added.

Mr. Rangel, who will introduce a resolution in Congress urging Americans to adopt a set of habits like eating breakfast daily, avoiding sugary drinks, and eating more fruits and vegetables, said he had struggled with healthy eating in the past. “I would starve for so long that I wouldn’t eat anything in the morning, and then comes 12, 1, 2 o’clock, and [I would] go absolutely berserk with no frame of references of what’s good and what’s bad,” he said.

The topic that seemed to inspire Mr. Rangel the most was the making of a smoothie. Explaining that there is a “Rangel approach to everything,” the congressman held court in the food pantry on the art of blending fruit.

“I’m very anxious to make my favorite drink,” Mr. Rangel said to his rapt audience, despairing ever so slightly because he had little time to prepare a smoothie before rushing back to Washington. “If I don’t feel that I got everything I need, it’s almost like trying to start a painting and you don’t have the right colors.”

“But I’m telling you, the next time I come back, the first thing that I need are my ice cubes. Is there anyone in the world who ever heard of a smoothie without ice cubes? It’s a heck of a way to begin but that’s okay because it gives me a chance to excel,” he explained.

What comes next? “Just a dash of milk and, how many people have seen this ginger that they sell in the store? You just cut a little piece of that raw ginger and throw it in there.”

Strawberries (“two of those baskets for five dollars”), bananas (“half-priced, if you get them a day old”) and pineapples (“selling for three dollars”) are the not-so-secret ingredients of an effective Rangel smoothie.

Breaking up the pineapples “looks like a big job” but Mr. Rangel said that “four wacks” is all that’s required. “You got yourself a precious tropical treasure, sweet pineapple. You take the strawberries, the bananas, the pineapples and the ginger–wow!”

Mr. Rangel’s wife Alma was not present, but the congressman revealed his wife had one piece of advice that he said he has struggled to follow in their half century together: eat everything in moderation.

“She eats anything she wants, when she wants and she knows how much to eat and what not to eat,” he said. Earlier in the day, Mr. Rangel had lamented that “there’s so few things that are so healthy, it’s totally unbelievable. Everything I fall in love and enjoy is something against my health.”

Still, the Harlem Democrat, first elected in 1971, was cocky enough about his ability to eat a healthy meal.

“You can bet your life. There ain’t no pork on my fork,” he said. 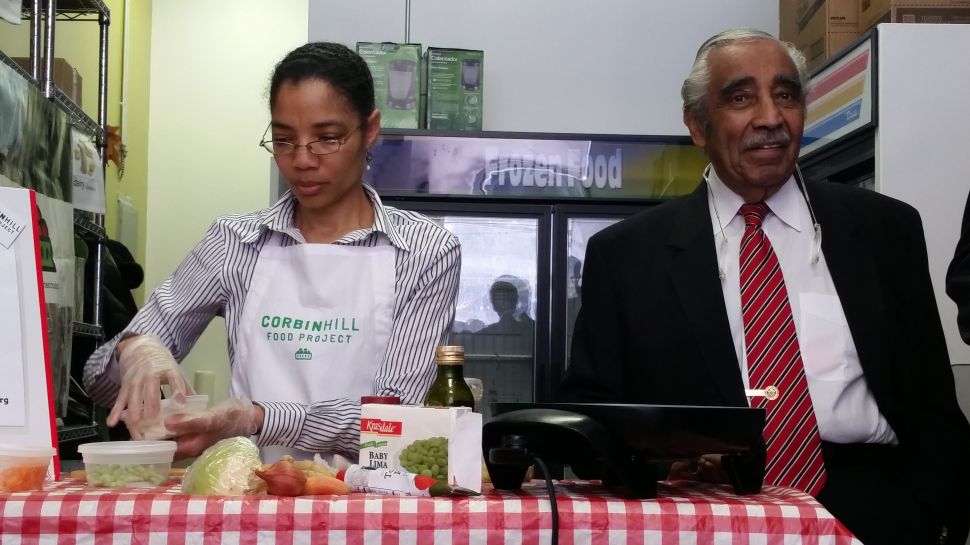