From the outside, the rectangular, black building situated next to the East River under the roaring FDR looked, perhaps, like an infrequently-used maintenance shed. The driver of my black car—the one the company had sent to pick me up from my office on the other side of town—indicated the nondescript black door through which I was apparently supposed to walk.

Passing through the helipad terminal’s door was enough to make me forget I was, just moments ago, standing on a dark, dirty side road under a noisy highway. Inside is a luxurious, ’60s-inspired lounge reminiscent of the Golden Age of aviation. Silver furniture pieces are sculpted from the same metal used to construct airplanes; a framed photo on the wall depicts a smiling Sinatra stepping out of a helicopter, drink in hand; a sleek bar to my right serves tequila on the rocks.

Through a large window on the wall opposite the door, against a backdrop of the Queens and Brooklyn skylines, I see a helicopter land on the smooth, concrete ground. This hidden speakeasy, after all, is the new terminal of BLADE: the on-demand helicopter service that shuttles affluent, predominantly-young clientele to the Hamptons, Teterboro, JFK and Mohegan Sun.

For BLADE’s customers, the opportunity to sip a drink, socialize, and look out at the helipad “makes their vacation start in the lounge,” founder Rob Wiesenthal told the Observer, “as opposed to your destination.”

For those unfamiliar with BLADE, the fast-growing company launched last Memorial Day as a way for users to charter a Hamptons-bound helicopter at the tap of a smartphone screen. Last November the company debuted BLADE Bounce, allowing users to book on-demand choppers to Teterboro and JFK—a timesaving alternative to sitting on a traffic-jammed highway to the airport.

To create the terminal, BLADE recruited Michael Beneville, an artist who tells stories through media ranging from books and artwork to Burning Man spider houses and iHeartMedia’s NYC corporate headquarters. It was following the completion of the latter project that Mr. Beneville was tapped to design the BLADE terminal. After learning more about the company, he enthusiastically took the job.

“Helicopters in particular, they’re amazing to me,” Mr. Beneville said. “They’re like dragonflies. They can fly backwards. They bend space and time.”

Joe Biden once described LaGuardia as something you’d find in a Third World country, and turns out, New York’s existing helipad terminals didn’t have a much better reputation.

“The dirty little secret about a lot of private aviation,” Mr. Beneville said, “is while the machinery is extraordinary, by and large, the experience of the waiting area is usually abysmal.”

“At the best its like a dentist’s office,” he continued, “and at its worst it’s like a half-eaten bowl of Jolly Ranchers and a crappy Keurig coffee machine.”

Largely inspired by the aforementioned Frank Sinatra photo, Mr. Beneville and the BLADE team set out to capture the cool, fun spirit of aviation in the ’60s and ’70s—an attitude that matched BLADE’s identity, as a brand. Instead of catering to the “uptight, jerky A-holes,” as Mr. Beneville put it, BLADE is “more into your low-key person who just has great taste.”

Every design feature in the terminal—down to the magazines on the table—was completely intentional, Mr. Beneville said.

There’s a vintage issue of Playboy featuring Christie Brinkley in her early 20s. There’s also a New York Times Magazine from 1973 whose cover bears the question: “Are the Hamptons Over?”—ironic, now, given BLADE’s huge business with Hamptons-goers.

“The details go right down to the ashtrays,” he said, referencing the free-standing ashtray now used as decor, but that, decades ago, might have adorned an airport waiting area.

We asked why Mr. Beneville went with the mostly-black color scheme.

“The outside becomes far more present when you darken the inside of the room,” he explained. “The helicopters and the river will come into stark relief.”

And then there’s the bar, modeled after BLADE’s logo—two “swoosh” shapes stacked on top of each other. The shape of the bar’s column, he said, “goes from large to small—it’s the logo expressed in vertical space.”

Since opening the terminal President’s Day weekend, BLADE has found that customers are coming to hang out—even if they’re not flying that day. From the great view, to the sleek decor, to the relative secrecy of it all, we can see the appeal.

Now, if only LaGuardia could step up its game (looking at you, Terminal B).

“There’s nothing sexier than traveling,” Mr. Beneville said, “and it’s such a wasted opportunity when people don’t take it seriously.” 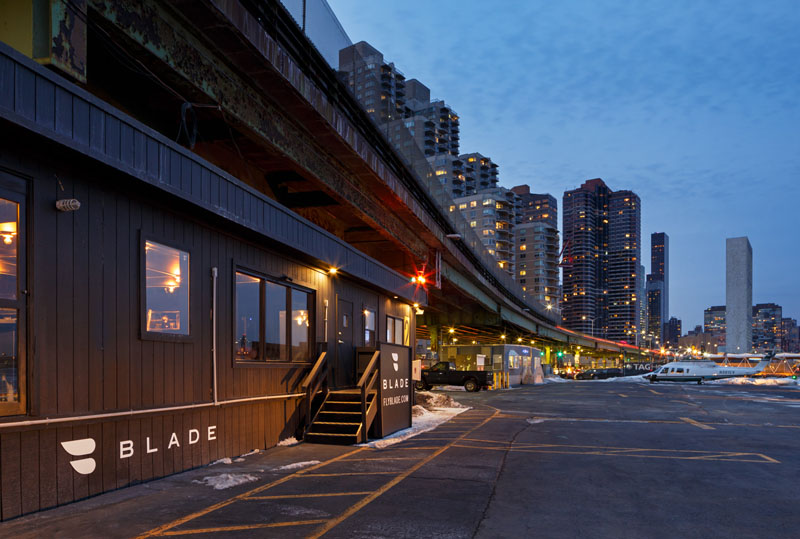