Let’s face it: New Yorkers are inundated with art right now. Aside from our usual excess of auctions, museum shows, and gallery exhibitions, there are currently no less than twelve art fairs vying for your attention.

If you’re an art collector (or even just an interested viewer with a limited amount of time) how do you parse through the glut of artwork that has descended upon the city? How do you separate the wheat from the chaff? The wealthy often job-out their research out to advisers or consultants, while regular folk prefer to do their investigating via the internet and/or word of mouth. Some even look to the critics for help. Perhaps you’re doing that right now.

If cutting-edge contemporary art is your cup of tea, then you’re in luck: I’ve been to Independent and it is as strong as it has ever been. Now in it’s sixth year, the fair (which opened on Thursday) is a boisterous jungle of paintings, sculptures, photographs, new media works, prints and ephemera to sort though. Fortunately, I’ve whittled hundreds of works down to just three of the most highly crafted and intensely thought-provoking works of art that you are likely to find at this much loved four-day event. And the winners are…

A gallery that often mounts one of the best booths at this fair, Brooklyn-based Real Fine Arts seems to have outdone themselves yet again. Despite the fact that RFA hung eight different artists, the booth is remarkably cohesive, from their kitty litter-layered abstraction by Jon Pestoni, to the sparse street poetry of Whitney Claflin’s magazine-collaged painting. But the cake-taker amongst them is Stefan Tcherepnin’s Cuddle Monster; a six foot tall mash up of Cookie Monster and Barney with the wingspan of Wilt Chamberlain and the eyes of a sweaty coked-up art dealer at 4 am.

While approaching my new friend, though, I encountered an old frenemy, grinning and lurching around a shadowy corner about to aggressively hug my brains out. It dawned on me that CM was the perfect metaphor for the all too familiar veteran art fair trader. That put a bit of damper my the whole thing, to be honest, as the context in which you see the art matters immensely in terms of how one views it. But wheelings and dealings aside, Cuddle Monster smartly taps into our childhood psyches via the unnameable other that is both best friend and bogeyman. Neither happy nor sad (neither red nor blue but purple) this childlike flâneur wears his doubts and fears on the outside. He’s the opposite of the mascots that symbolize unending victory, the antithesis of the fantastical costumes we lose ourselves within.

Stefan—who has a brother, Sergei Tcherepnin who showed in the 2014 Whitney Biennial as a sound artist—is the kind of artist who continually prods at the edges of what is considered art. And that’s no small feat at a time when many artists resign themselves to mimicking the art of the past. There’s little doubt that he will continue to evolve in even more exciting and unpredictable ways as he continues to expand his practice.

Diane Simpson at Corbett vs. Dempsey

A satisfying side effect of a hot art market is that talented older artists sometimes get rediscovered as galleries continually attempt to stand apart from their competitors. One such discovery is 80-year-old Chicago native Diane Simpson who, despite finding early success in her home state, had not had a New York solo show for 33 years until her flawless 2013 exhibition with Lower East Side newbie JTT, who is also showing at Independent—for the first time ever, it turns out. Ms. Simpson somehow slipped through the cracks of American art history, never fitting neatly into either the Manhattan Minimalist camp nor the figurative scene of Chicago Imagists.

One can find a monumental Simpson piece titled Window 4, Window Dressing: Apron VI at the booth of another Independent first-timer, Chicago gallery Corbett vs. Dempsey (who also boast some lovely paintings by Rebecca Morris.) Like most of Simpson’s sculptures, Window 4 is based on a clothing item that has been isometrically flattened and then regenerated with a variety of materials—in this case, everything from gator board and Masonite to wallpaper and crayon. The finished product looks something like an armored kimono on a kabuki stage designed by a 1950s American housewife. It’s an incredibly unique fusion of the delicate and the monumental within one charismatic object.

With Window 4, Simpson pushes her concepts as far as they’ll go by recreating a department store window around her garment. It is a nearly perfect object made with a consistent rigor. Each joined seam or painted arabesque is constructed with ridiculous care and a deep understanding of the histories of both fashion and art. Watching Ms. Simpson finally garner the praise she deserves is one of the sweeter stories around, so savor it while you can.

Independent sports a group of smart and talented young painters this year, led by Torey Thornton, Nicolas Party, Julia Rommel, Becky Kolsrud and Michiel Ceulers. But at the end of the day, it’s an easel-sized painting from 1977 by A.R. Penck that steals this show.

Fairs like Independent allow viewers everything but time, and Mr. Penck’s gripping Dresden serves you time by the barrelful. What we see rendered in the painting are faces and figures of beautiful women and gaunt men from another time and place, some in rough outline, some barely rendered at all. Crosses and other crude symbols are also scattered throughout this tightly packed jigsaw puzzle of tangerine, ochre, incandescent green, and sky blue.

But Dresden is so much more than color and line. It unleashes the ghosts of Germany’s haunted past. It is the rebirth of painting as a brave stance against a totalitarian regime. It is an influence powerfully felt across an ocean by artists like Keith Haring and Jean-Michel Basquiat, an influence that is still seen in the work of fledgling painters like Mr. Thornton and Ms. Kolsrud. It is a history so potent that it is inextricable from what we see–beautiful colors and elegant lines–and it will always feel contemporary. 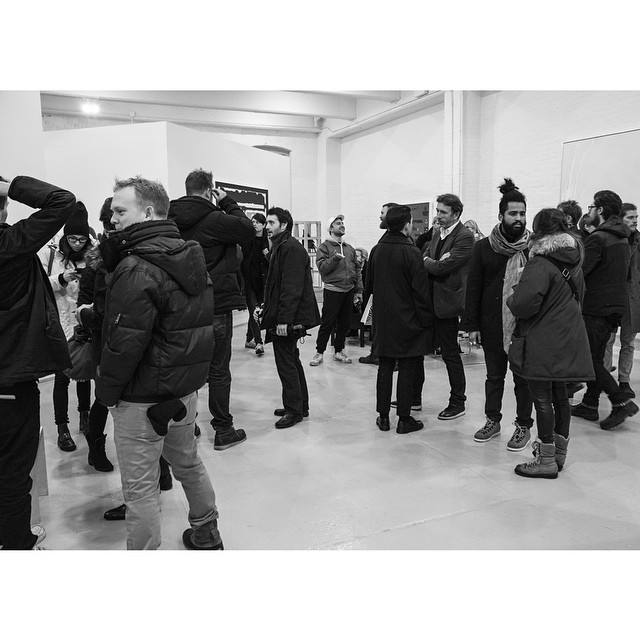