“Eric Scott was offered free use of a 2015 Corvette Stingray by Ask The Governor sponsor Lester Glenn Auto Group from March 17, 2015 – March 24, 2015 as a result of an unsolicited humorous comment made by Governor Christie on February’s award winning monthly Ask the Governor program on New Jersey 101.5,” Berkett said.

“Neither New Jersey 101.5 owner Townsquare Media, nor Mr. Scott, paid for use of the automobile,” he added. “The car belongs to Lester Glenn Auto Group.

Berkett followed up with PolitickerNJ after a report about Scott’s use of the Corvette yesterday in the International Business Times.

“The offer for use of a car was conceived by the Lester Glenn Auto Group while Mr. Scott was away on vacation, without his knowledge, and the car was delivered upon his return,” Berkett said. “The duration of use was not specified precisely, but Mr. Scott planned to return the cat after last night’s Ask the Governor program, giving him an opportunity to show the governor the car which they had originally joked about on the prior program.” 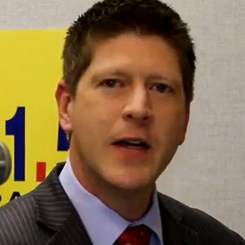