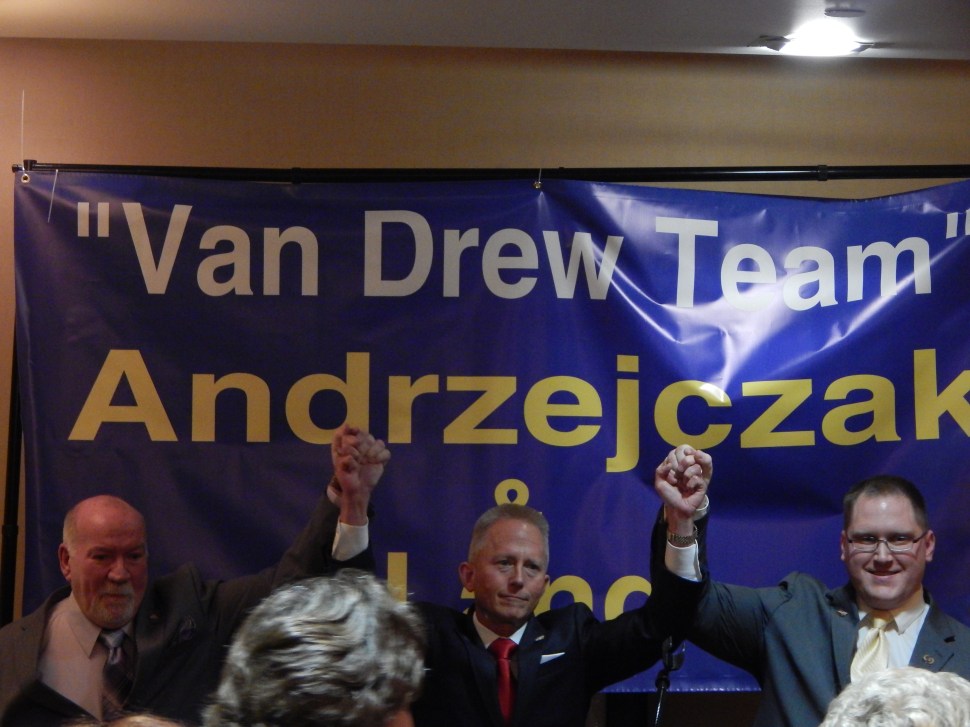 VINELAND — Prepared for all-out war with their Republican challengers in a South Jersey battleground district expected to be one of the bloodiest of the 2015 electoral season, first legislative district representatives state Senator Jeff Van Drew (D-1) and Assemblyman Bob Andrzejczak (D-1) unveiled the latest member of their team here in Rose ballroom of the Hampton Inn tonight.

Bruce Land, a 64 year old veteran of the Vietnam war, local community sports coach and retired captain with the New Jersey Department of Corrections, is the candidate that will join Andrzejczak — on a slate without Van Drew — as he heads into a November dogfight.

Recruited because of his own army background — he’s an Iraq War veteran, serving tours for the U.S. Army and attaining the rank of sergeant in 2008 — Andrzejczak joined the Assembly in 2013 after being tapped to fill a vacancy left by Matthew Milam. He’s spent the last two years serving as chairman of the Assembly’s Agriculture and Natural Resource Committee and a member of the Military and Veterans Affairs committee, and now faces the challenge of holding his seat against a team of opposing Republicans: incumbent Assemblyman Sam Fiocchi (R-1) and local businessman and Cumberland County freeholder Jim Sauro. 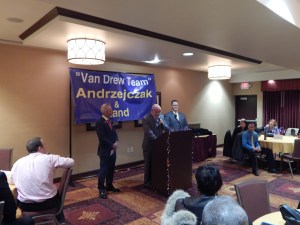 Particulary, the LD1 race will be a test for Andrzejczak, who has not yet had to fight for his seat. The Democrat has been hard at work churning out legislation in Trenton, tackling issues from veterans healthcare to economic relief for Atlantic City casino workers, but it remains to be seen whether he’ll be strong enough to fend off a serious challenge this year, an assembly election year, when he won’t have the advantage of the veteran Van Drew’s name heading up the ballot.

Van Drew, for his part, said the fact that he’s not up for election won’t keep him from gunning for his district mates as hard as he would if he himself was on the ticket.

While Van Drew called the candidate’s background “coincidental”, Land joining the LD1 team can be seen as an attempt to double-down on the ticket’s war veteran appeal: between the two of them, Land and Andrzejczak hold two bronze stars and one purple heart for their service overseas. That counts in LD1, a district which covers much of South Jersey, including parts of Atlantic, Cape May and Cumberland counties, and boasts a large population of military veterans.

“He’s going to be a huge asset to the team,” Andrzejczak said. “Definitely a war veteran, but he’s also a really down-to-earth guy, and has done so much for the community. I think this is just going to be the next step, and I look forward to working with him.

Speaking to PolitickerNJ following the event, Land said he had never considered getting into politics — “it’s a whole new ballgame for me,” he noted — but said when he was approached by Van Drew he couldn’t refuse. In addition to coaching sports, Land is also an officer at the Vineland North Italy Club and a member of the NJ Superior Officers Association.

“My son asked me if I have the answers — I told him I don’t even know the questions yet,” Land, who’s been retired for seven years, said. “This is all new to me, but I’m excited about serving the district.”

Bigger issues that the team expects will play a central role in the LD1 race include spurring economic growth, veterans affairs, and keeping taxes at a minimum — including taxes on gasoline, touted by some legislative leaders in Trenton as solution to a deleted Transportation Trust Fund.

“In South Jersey’s opinion, we’re going to have to limp a little, take it day by day, year by year. But we are very, very concerned about a large gas tax increase,” Van Drew said. 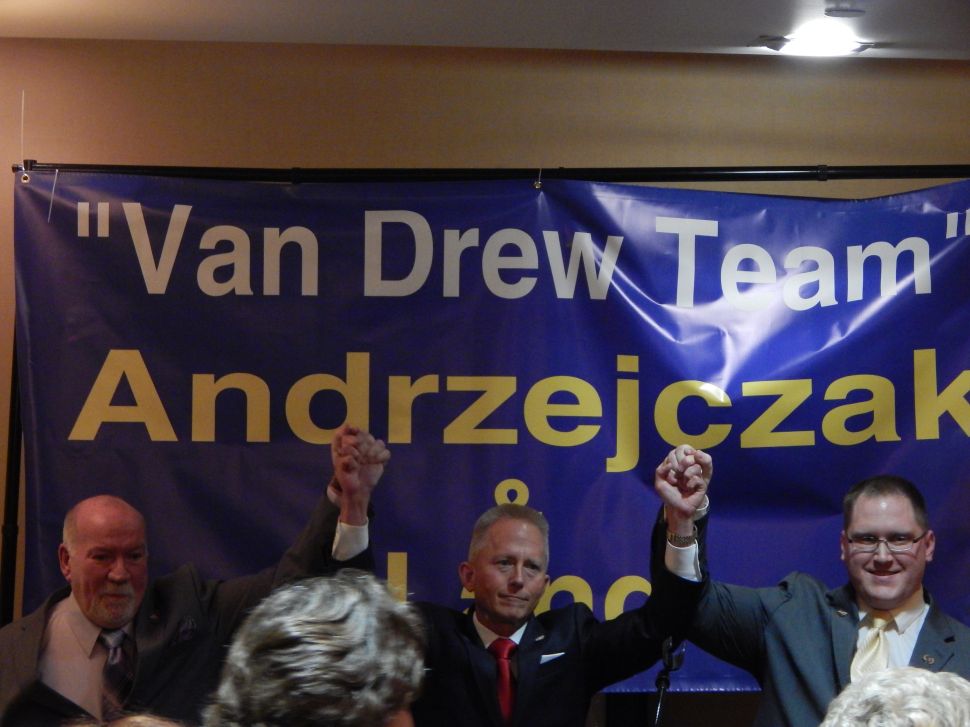