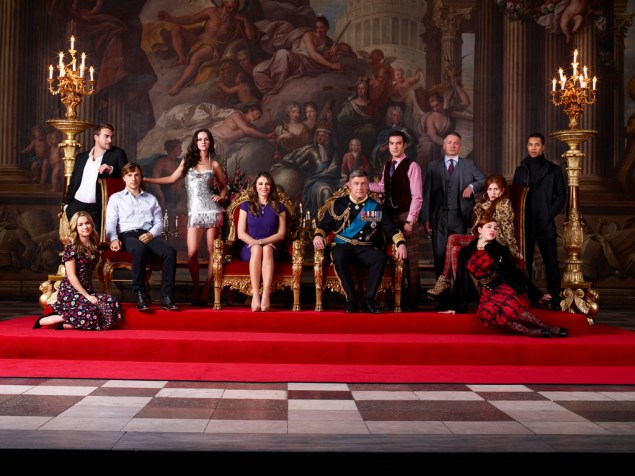 Bow to the queen: Elizabeth Hurley and cast of The Royals. (E!)

For their first foray into scripted television, E! didn’t venture too far from what they know. The channel covers the British royal family with stories and footage of Will and Kate, Harry, and even the Queen Mum, on a seemingly daily basis.

So, in keeping with that tradition, E! is launching a new series, entitled simply The Royals, about a less politically correct fictional family ruling a contemporary British monarchy.

The new hour-long drama from One Tree Hill creator Mark Schwahn gives viewers more than just a peek behind the curtain at a British royal family, but certainly not THE Royal family. There’s sex, drugs, scandal and plenty of mystery to keep every member of this clan on their toes, all amid fabulous clothes, lush scenery and a captivating soundtrack.

Schwahn explains that it was actually Shakespeare that gave him the idea for the series. “A couple of the One Tree Hill executive producers that had optioned a book called ‘Falling for Hamlet,’ which is a contemporary retelling of Hamlet. I didn’t think that that exact story was good for a spot on series because, well, spoiler alert, everyone dies. But, I could see the potential for some very interesting drama in using a royal family as the centerpiece because the stakes are so high and because in an all access world this is something we still don’t have access to – behind those gates — and people really wonder about that. I felt like this was the perfect way to explore themes of public versus private and image versus identity and things like that.”

The more Schwahn thought about his subject matter the more he realized that delving into this world was a golden idea. “Think about it, some 23 million Americans watched Kate and Will’s wedding and the number was similar for Diana and Charles and that was just in the states. The numbers were much higher worldwide. I think people are fascinated with the mystique of this family because we don’t have a royal family in the United States.”

When it came to working with E! on the project, Schwahn was understandably a little unsure of the idea, given that the net, until now, has only programmed reality and entertainment news entities, but he looked to something that had happened in his past for guidance. “It’s true, E! was not a network that was on my radar for this project but then I remembered a conversation with a One Tree Hill producer that I had years ago. She told me that she had a new show called Mad Men that was going to be on AMC. I remember that at the time my instant thought was, ‘AMC is a network that shows really long movies with lots of commercials, is someone gong to watch a scripted show on that network,’ and look how that turned out.  So I thought about that when E!, a network not known for scripted programming, started pursuing this show. Now, I’m one hundred percent onboard and I want to be a big part of what E! is going to become. I want my show to be the show that leads them into scripted arena.”

The actual pressure of being the first scripted show on the network isn’t lost on Schwahn. “Sure, I feel a sense of responsibility, but I kind of work well from that place. Pressure is an interesting word to me. I feel like all I do is go in and pitch an idea or a world to executives. It’s not math or science and there’s no way I can’t prove to them that it’s going to work, but I feel like if they take that leap of faith and believe in me then I put that on my shoulders and really want to rise to the occasion and make sure everyone is pleased with the result.”

E! seems pretty pleased with the result thus far – giving Schwahn and his team a second season even before the show has aired a single episode.

“We didn’t know that we were getting second season when we were finished first, but I always bet on myself, “explains Schwahn. “That might sound arrogant and I don’t mean it to, but if I work on a pilot script and we shoot that pilot, then I’m planning on the show going five seasons. I’m not crafting the show to go one and done. I expected to get a second season pick-up and I’m thrilled that it happened. And here’s something else I believe — I feel like if we’re not on the air in season five then that’s on me, that I made a mistake and I screwed it up somehow.”

At this point, prior to air, Schwahn again wants to reiterate that this is a FICTIONAL family, saying, “One of the biggest things for me that I really want people to understand is that we are NOT telling stories about the actual British monarchy, we’re not casting stones at the institution, we’re not judging it in any way shape or form, and we’re certainly not commenting on the actual monarchy. It would bother me if people thought, especially in London where our production has been embraced by everyone that we’ve worked with, that we’re being the least bit critical. This is completely fictional, it’s meant to be fictional, I think people might get confused because it’s modern day so the references are actual real references, but it’s not bio pic or a docudrama. If anything, it’s just ‘royal adjacent.’”

In a time when it seems like a new show debuts nearly every day, Schwahn knows that competition for viewers is high, so he offers this about The Royals, “I think TV, when it’s at is best, is either an escape or a mirror. It’s either showing you something that you’re dealing with in your actual life or it’s allowing you to escape something you’re dealing with in your actual life. I think this show does both of those. TV is all about characters – if you can relate to them, root for them or even in some cases, love to hate them — whatever it is that you find in them, you’re compelled to see what happens to them and that’s what keeps you coming back week after week. Specifically here, this show is a juggling act of so many things — it’s a drama, it’s a mystery, it’s sexy, it’s sexual, and yet it’s not afraid to earnest, funny, and romantic. It does all those things and I think it does all that because we as people do all those things. So, it may be an escape or you may relate to it but whatever it is to you, I think you’ll be drawn in by these people from the very beginning. I really think this series will be many things to many people – some people will find a guilty pleasure while some will find it a like a modern day night time soap like Dynasty or something like that, and it is those things. Absolutely none of those things bother me, whatever reason people want to watch that’s ok with me. Just watch.” 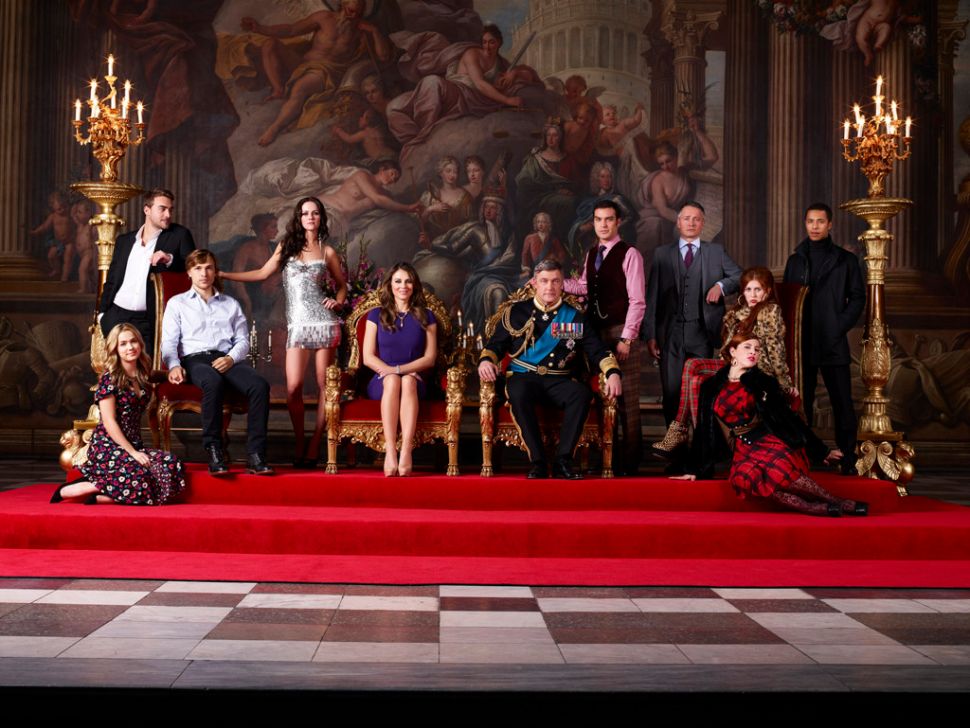