When Santiago Calatrava revealed his design for the World Trade Center PATH transit hub in 2004, he sketched a child releasing a bird, conveying a vision of avian lightness for the station. A year later, when construction began on Mr. Calatrava’s bone-white design, which was to rise elegantly over Ground Zero, he and his daughter released doves to underscore the vision. But as any recent visitor to the site might notice, the graceful ribs of steel at the as-yet-unfinished transportation hub are not the snowy white of dove’s wings, but the splotchy brown of a pigeon’s, densely speckled with unsightly rust.

The train station is manifestly under construction, as it has been for the last 10 years, but it’s slated for completion at the end of this year, according to a Port Authority spokesperson. Certainly the rust wasn’t intentional? Or even worse, given the nearly $4 billion spent on the hub, accidental?

To our surprise, an October piece by Second Avenue Saga’s blogger Ben Kabak in the Atlantic’s CityLab suggested that maybe it was: “The stark white design of Calatrava’s rafters hulk over the streets even as the visible joints and rust coloring give it a rundown urban chic look,” Mr. Kabak wrote.

True, Calatrava’s renderings of the station show the ribs as white as dinosaur bones bleached by the sun and the white marble interiors promised within would not seem to agree with a rundown chic aesthetic (as hip as the Barclays Center’s Corten steel exterior is…). But perhaps, after the number of ribs and struts were doubled, the movable roof and glass components eliminated, and the oculus shrunk, the architect had opted for a grittier look to match.

We reached out to Mr. Calatrava’s organization to clear things up. “This type of local corrosion is perfectly normal in any steel works on-site while the welding procedure is ongoing because the steel is still unprotected,” a spokesperson for the architect wrote. “Once all of the welding is done, the steel will be blasted, cleaned and the appropriate corrosion protection system and paint will be applied.”

After a testy bit of to-and-fro, a Port Authority spokesperson also confirmed that “all of the renderings show a pure white structure,” which is to say, the rusty look is not intentional.

As for the stucco-like texture of the mezzanine ribs, The New York Times reported this fall that the silky smooth finish of the renderings will not be similarly forthcoming as “the client was not prepared to spend the additional money.” 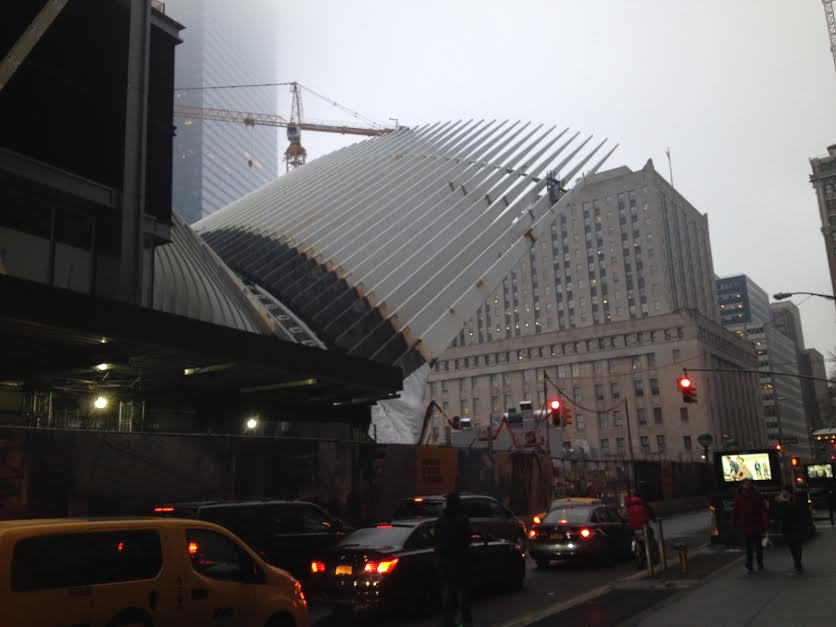