Is your job killing you?

According to death statistics from 2011 compiled by the CDC, the top three killers in the United States are heart disease, cancer and chronic lower respiratory diseases like emphysema. Collectively these diseases killed 1,316,211 Americans that year.

Far too many of these deaths were preventable. It’s no secret that regular exercise and a good diet can dramatically reduce rates of heart disease. Nonetheless, nearly 80 percent of American adults don’t get the recommended amount of exercise each week (2.5 hours of moderate aerobic activity or 1 hour and 15 minutes of vigorous activity).

Given how critical fitness is to overall health, I think it’s worth taking a look at exercise in the one place where nearly all of us will spend a good chunk of our lives: the workplace. My observations are anecdotal — pulled from experiences in my own company — but I think the lessons learned can apply more broadly.

In my office — we’re a tech company with around 700 employees focused on social media — exercise before, during and after working hours is encouraged. When we moved into a new headquarters several years ago, we installed a small gym and yoga room, as well as showers and changing rooms. Facilities are modest compared to those at some companies, but they’re well used. Yoga classes are packed before work, at lunch and after work. In the gym, volunteers from our company lead sweaty bootcamps and cross-training classes. Groups set out from our office for lunchtime runs and evening hikes. We have a hockey team and a road biking team and even a Quidditch team that does battle on broomsticks in the park.

But, when it comes to promoting fitness on the job, dedicated facilities and organized teams like these are hardly necessities. Having the right workplace culture is far more important. Back in the day, in our cramped startup offices on the industrial side of town, we couldn’t afford a gym (in fact, we couldn’t even afford phones). But we did hang a fingerboard on the wall for pull-ups. We brought in yoga balls for chairs. We encouraged employees to bike to work, even though that meant cramming our office entryway full of bikes because it was too sketchy to park outside. And we made it clear that anyone could block off an hour for exercise during the day, provided it didn’t conflict with meetings and they made up the time (by having lunch at their desks, for instance).

I’m picturing old-school managers out there rolling their eyes. The manager’s job, after all, is to get results out of employees, not keep them fit. But even on a ruthlessly practical level, allowing and encouraging employees to exercise at work makes good sense. I see employees return from workouts refreshed and better focused on their jobs. Time lost on exercise is made back and more in terms of improved productivity. There’s some research to back this up. A study presented to the American College of Sports Medicine, for instance, found that workers who spent 30–60 minutes at lunch exercising reported an average performance boost of 15 percent. Sixty percent of employees said their time management skills, mental performance and ability to meet deadlines improved on the days they exercised. Workers in the study were less likely to suffer from post-lunch energy dips after exercising and also reported improvements in mood.

Then there are the longer-term benefits to keep in mind. Healthy, active employees take fewer sick days and bring more energy to the workplace. A 2011 study published in the Journal of Occupational & Environmental Medicine showed that incorporating just 2.5 hours of exercise per week into the workday led to a noticeable reduction in absences. Perhaps most importantly, fit and healthy workers are less prone to exactly the kinds of preventable, debilitating illnesses that take such a heavy toll on families and on society.

As a personal aside, I don’t think I could have steered my company to where it is now without regular exercise. Over the past six years, we’ve grown from seven employees to a global operation with offices around the world. It’s been a fun ride but not exactly the smoothest one. In the beginning, I was responsible for everything from marketing and HR to sales, product development and finance, often working 16-hour days for weeks at a stretch. Later came the stresses involved with scaling a tiny company into a worldwide operation, adding dozens of new employees a week and outgrowing offices every few months. For an entrepreneur, of course, these are all good problems to have. But I wouldn’t have been able to maintain composure and focus in the midst of this chaos without taking at least a little time each day for exercise and, in particular, for yoga.

Growing up, I had always been active — playing lots of ultimate frisbee, mountain climbing and cycling. But right at the time that Hootsuite was ramping up, back injuries caught up with me. I turned to yoga as a way to strengthen my core and give my body time to heal. But I quickly discovered that the physical benefits were easily matched by the mental benefits. Yoga is literally a moving meditation. It gave me time to clear my head, unpack the volumes of new information I was absorbing each day and then come back with a new, clearer perspective on the problems at hand. On top of that, it’s a great workout.

At the end of the day, however, it’s not the type of exercise that matters so much as providing a space in the workplace where fitness can thrive. There’s a saying that couples who sweat together stay together. I think it’s just as true that companies that sweat together stay together. Over the years, the culture of fitness in our office has grown with the enthusiasm of new employees and taken on a life of its own. Today, our staff include ultramarathoners who run 50 miles at a stretch, elite cyclists and triathletes, personal trainers, avid rowers and sailors, yogis and hardcore hikers and, of course, lots of people like me who just like a good workout from time to time.

Exercise in the office isn’t a new idea. But it’s such a clear win-win — in terms of health, morale and productivity — that I think it deserves to be put in the spotlight once more. Considering how pervasive heart disease and other preventable illnesses are, it’s not an exaggeration to say that our future — as healthy individuals, healthy companies and healthy societies — may depend on it.

Ryan Holmes is the CEO of Hootsuite and Founder of Invoke Media. 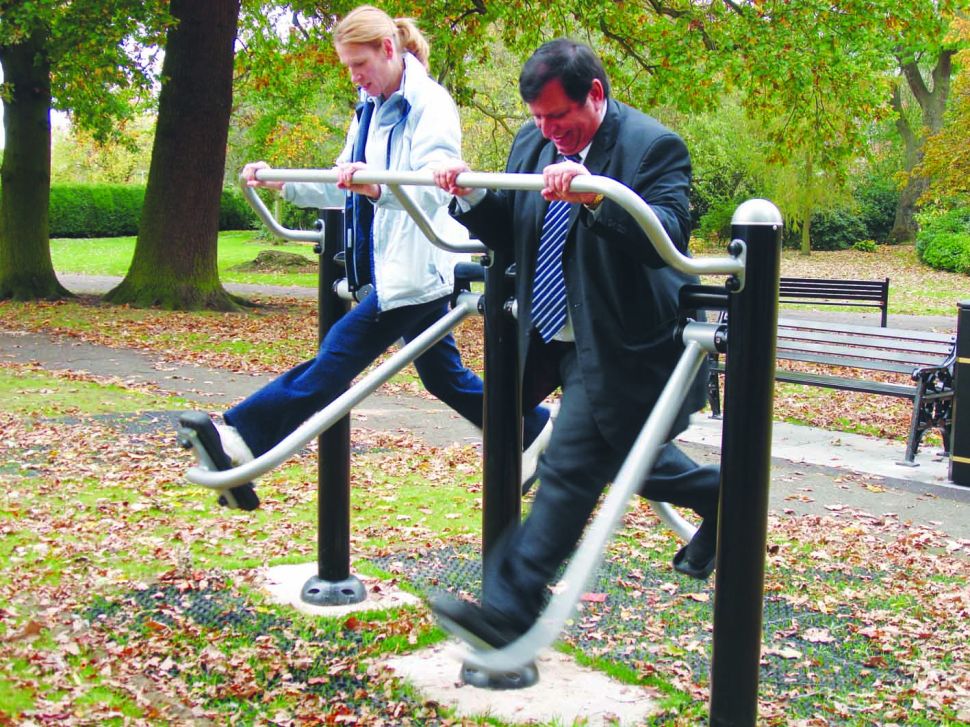