When the campaign for a film called Billion Dollar Bully hit Kickstarter last week, support began pouring in. The investigative documentary—which will probe allegations of manipulation and fabrication of reviews, extortion and other questionable business tactics by marketing giant Yelp—is quickly approaching its $60,000 goal, but not without one big adversary.

According to the film’s producer and director Kaylie Milliken, Yelp “seems very threatened” and is “extremely concerned” about her small, two-person production. This is no surprise, considering the company’s shares were down 4 percent in trading the day after the project was announced—a dip that many are attributing to the documentary, according to Business Insider.

“I have gotten a huge reaction from [Yelp], which I have to admit, I was not expecting,” Ms. Milliken told the Observer, adding that they’re only halfway done filming. “They’ve been aggressively denying it and trying to discredit my character and the film itself.”

In a statement to Business Insider regarding the film, a Yelp spokesperson said, “there is no merit to the claims they appear to highlight” and that “the director has a conflict of interest, as she has a history of trying to mislead consumers on Yelp.” The spokesperson is referring to Ms. Milliken’s use of several profiles on the site, which she claims she created just for the sake of her investigation.

In a CNBC interview that pitted Ms. Milliken against Yelp’s vice president of corporate communications on Monday, Shannon Els of Yelp questioned both the film’s claims and Ms. Milliken herself, adding that it’s “weird” that Ms. Milliken continues to look into these claims that have been dismissed by federal judges and the FTC. She also said that by being there, she is part of Ms. Milliken’s fundraising effort.

“They sent in this person to discredit me, and I’m just so surprised. I mean, we’re raising money on Kickstarter to do this indie documentary,” said Ms. Milliken, emphasizing that it’s a two-person production company that this billion dollar corporation has come after.

On CNBC Ms. Els says they (Yelp) are not there in fear, yet according to Ms. Milliken, the company refuses to sit for an interview with her.

“I have a lot of questions for them, and if they don’t have anything to hide, they should be open to having an open discussion about each point,” she said.

Although she will no longer use Yelp, Ms. Milliken says she is not out to sway consumers from the site, but to have them examine their business practices.

Ms. Milliken says she is simply going to present facts. She interviewed attorneys of those who have brought cases against Yelp and business owners with items to back their claims. She’ll examine the claims, the rulings of the court in which Yelp won and why they won those cases.

With 25 days remaining to raise the last $12,000 of the $60,000 goal, the Kickstarter campaign is on track to succeed. Ms. Milliken said the film will be completed by fall and that she will enter the finished production in various film festivals.

See: Yelp Reviewers Sue to Get Paid for Their Painstaking Accounts of Brunch

Correction: Ms. Milliken clarified that, prior to using multiple Yelp accounts for her investigation, she had also used multiple accounts to leave reviews because she couldn’t figure out why her reviews seemed to be disappearing. 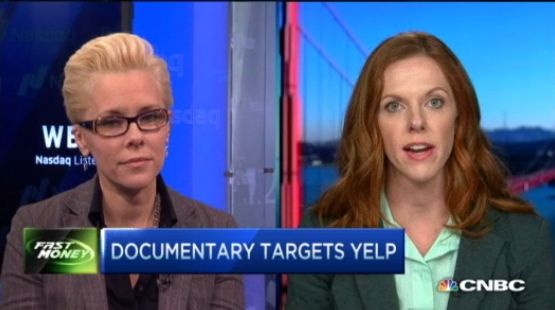