Last week, Ballet West came East—all the way from Salt Lake City to the Joyce. There was lots of build-up, both because of the company’s good reputation and because of its participation in the reality TV series Breaking Pointe. But, alas, it made the mistake so many out-of-town companies make when they finally get to the Big Apple—it brought us only recently commissioned works, presumably to show how creative it is, and to reward the donors who made the new works possible. Whereas we hardened dance critics know all too well that if you have four new works, you’re ahead of the game if even one of them is worth exporting from Utah or Seattle or Houston or wherever.

Yes, four new works, and I will try to deal with them more expeditiously than they dealt with me.

1) The Sixth Beauty, choreographed by Matthew Neenan to the (harsh) score of Alberto Ginastera. Neenan is a graduate of the Pennsylvania Ballet, for which he’s created a dozen works, and he’s busy elsewhere, too. And why not? He’s accomplished, and he makes his dancers look good (actually, they look good to begin with). But there’s nothing original or interesting here—just hard-worked athleticism with a touch of the romantic. Also, it’s endless.

2) Presto, by Nicolo Fonte (string music by Ezio Bosso). The program note tells us that this piece “takes the dancers into a new realm … at once sculptural and abstract but profoundly emotional and intense.” Actually, we’re back in the same old realm of the first piece. But Presto has the supreme advantage of being short.

3) Games. Helen Pickett reinvents Nijinsky’s famous Jeux, to the radiant Debussy score. Jeux has been lost since its few performances, in 1913, when it was a minor scandal with its implications of s-e-x between its two women and between them and its sole male. The metaphor was tennis, and there are beautiful photographs of Nijinsky swinging his racket. (All photographs of Nijinsky are beautiful.) In Pickett’s version we once again have two women and one man—plus two cellphones. If that isn’t modern, what is? It offered effective movable scenery (Michael Andrew Curry), pleasant “today” clothes (Sandra Woodall), and a concept that wears thin almost before it’s launched.

4) The Lottery, based on Shirley Jackson’s sensational short story that upset a lot of people when it appeared in The New Yorker in 1948. (I was among them, but I was young then.) One member of a group of seemingly normal citizens in a small community is stoned to death when chosen in … a lottery. The ballet is set in what seems to be a corral—very western-y, with white picket fences. In other words, it’s The Rite of Spring meets Rodeo.

The very prolific choreographer is Val Caniparoli—something like 80 dances to his credit, a few of which I’ve seen, given that he’s been a long-term resident choreographer for San Francisco Ballet. (I vaguely remember something by him called Ibsen’s House, but maybe it’s only the title I remember.) The Lottery offers us seven couples, in convincing Sears-Roebuck-y clothes (again by Sandra Woodall, although this time round we’re also given the name of the “Fabric Design Consultant”). Every movement is capable, every moment predictable. Caniparoli is the quintessential house choreographer, but his work should be kept in-house, not trekked to New York. We’ve been seeing stuff like this forever.

Ballet West is a talented mid-size company—a lot of handsome, well-trained dancers. Many of the women are exceptionally, and stunningly, tall, and the men are attractive and virile. Wouldn’t it be great to see them in what they tell us is a wide-ranging repertory, “From Balanchine to Bournonville and Petipa to Tharp.” That would be a giant step up from Neenan to Fonte and Pickett to Caniparoli.

The final stretch of the Paul Taylor season at the Koch—thrillingly to live music under the baton of Taylor composer Donald York, and the beneficiary of the theater’s vastly improved acoustics—gave us a series of wonders. We had already seen Arden Court, Esplanade, Cloven Kingdom, Beloved Renegade, Brandenburgs, Company B; now came the incomparable Sunset, the terrifying Last Look, Promethean Fire, Piazzolla Caldera and the enchanting Diggity—please, PT, don’t put it back into mothballs. And speaking of welcome revivals, it was good to see The Word back, its pulsing score by David Israel fully revealed by the live music

There was one misfire: The choice of Shen Wei’s Rite of Spring as one of the works by outside choreographers Taylor is collecting under his “Paul Taylor’s American Modern Dance” umbrella. Shen Wei has ardent admirers and a considerable reputation, but this piece is a dull drag. (Particularly frustrating, given Taylor’s own brilliant and original Rite of Spring.) There’s an interminable opening during which the Shen Wei dancers walk slowly onto and around the stage, in dreary light and to no effect. Then they create patterns. Then the Chosen One (or ones, it’s hard to say) is terminated. Stravinsky’s revolutionary and shattering score is heard here in a recorded, shrill four-hand piano version by Fazil Say. (Either he has four hands, or he’s playing with himself.)

A big surprise: A changed ending to the new Taylor work Death and the Damsel. At the premiere, the Damsel survived and prevailed. By the second performance she was down for the count. Why? The first ending seems to me to make more sense, but the second has more force. The piece remains harrowing and strong.

Part of its success stemmed from the wonderful central performance by Jamie Rae Walker. She’s exploded this season—in Esplanade, for instance, she’s a miracle of ecstatic energy. But then almost every one of the Taylor dancers is a miracle. Michael Trusnovec remains the miracle, but his frequent vis-à-vis Robert Kleinendorst remains a large-scale dancer who always gives his all, and whose range is amazing—from Latin sexy in Piazzolla to hilarious as the Boogie Woogie Bugle Boy (of Company B). Beauteous Parisa Khobdeh, with an equally wide range, was happily back with the company after missing last year’s season. Eran Bugge keeps growing in stature if not height, as she assumes more and more central lyrical roles. Young Michael Novak, dancing with such appealing intensity … ravishing Heather McGinley … promising Christina Lynch Markham … Almost every Taylor dancer deserves special praise, so please consider them all praised. 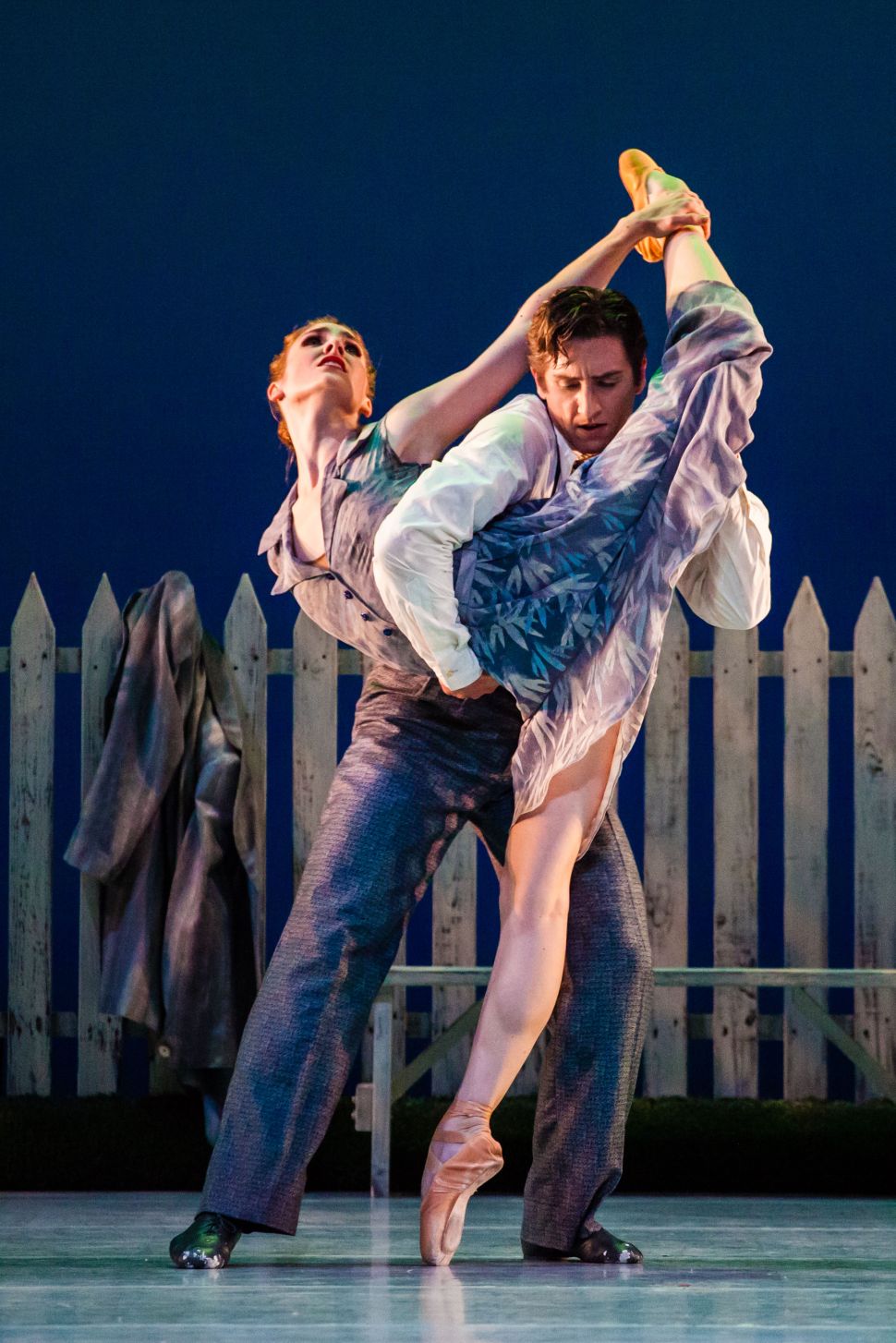