So cold and dreary one character laments that “we even have indoor fog,” the first thing you see is the set—an ugly, cluttered and characterless one-room London council flat designed by Bob Crowley. The backdrop, a hideous building of windows overlooking an alley where the lights come on and off, is a perfectly shabby one for David Hare to prattle on endlessly about love, loneliness, class distinctions, politics and spaghetti sauce.

The play is last year’s London revival of the 1996 Skylight, imported from the West End with Carey Mulligan and Bill Nighy to the Golden Theatre on Broadway. I was less than entranced when I first saw it originally with Lia Williams and the vastly superior Michael Gambon as two lovers reuniting with disastrous results for one night only after years apart. I liked this production better, mainly because of the enchanting Ms. Mulligan, a film star making a riveting stage debut. But it’s still an overrated bowl of suet pudding. You go for the acting.

She plays Kyra, a schoolteacher with liberal leanings who has turned her back on the privileges she once knew to teach underprivileged children. He is Tom, a successful restaurant entrepreneur appalled by the squalor she lives in. She was his mistress for six years while he basked in materialism, until his wife found out about his unfaithfulness and Kyra walked away without a backward glance, riddled with guilt. They grew apart. Now the wife has died of cancer and one snowy night he drops in unexpectedly, hoping for a bit of a shag. Clearly absence has not made the heart grow fonder. Kyra is still an impassioned and idealistic middle-class liberal eschewing creature comforts. Tom is still the money-worshipping opportunist who upholds Britain’s eroding class system. In a weighted two-hander that lacks ballast, their needs are still strong emotionally, but not spiritually. Hypocrisy nips away at their values throughout, and neither is perfect. But it is Kyra whose propriety is unshaken. It is very much a play about status.

It is also a play about cooking. From the minute Kyra gets home and unpacks her groceries, through the preparation of what smells like a delicious pasta dinner, food plays as important a part of the social interaction as breathing. She chops the onions and garlic, fries the vegetables, offers him the cheese to grate, and adds the canned tomatoes. Unfortunately, everyone is so busy arguing that nobody ever gets around to eating. The pot on the stove ends up on the floor.

I felt the characters never really came together, and the two invasions by Tom’s 18-year-old son Edward (Matthew Beard) seem like mere padding. Stephen Daldry’s direction is beautifully understated. Ms. Mulligan combines the intelligence and charm she displayed in An Education, the strength and resolve from Never Let Me Go and the heartbreaking vulnerability from Shame. You are glued to her every move. Mr. Nighy is not as compelling. In a series of tics, mannerisms and grimaces, he’s mostly annoying. He’s also a colossal spitter. He sprays the stage so much when he shouts that it flies all over the furniture and he has to visibly wipe his chin with his bare hands. Guzzling whiskey and chewing on imaginary gristle, he steals scenes the way Tallulah Bankhead used to, shaking bracelets and blinking her eyes during other actors’ speeches. Ms. Mulligan cooks the spaghetti. Mr. Nighy provides the ham.

I’ve wasted some lousy evenings in the theater, but a brainless barrage of trash, heresy, stupidity and nausea called Hand to God is the first time, in all my years on the aisle, that I have finally seen an entire stage filled with unmitigated crap.

There is no plot, no narrative form, no theme. You merely find yourself in the children’s playroom of a Texas church where the walls are covered with graffiti no real child would ever be allowed to see. A woman named Margery, the widow of a recently deceased parishioner and object of the pastor’s lust, has organized a puppet club, which is an obvious flop since it only has three members. One of them is a moronic, overgrown goon who rapes her in the crafts room. Another one is her own son, who has a hand puppet named Tyrone attached to his arm that acts like his alter ego and thinks it is Satan. Or God. (In this thing, they are the same fairy-tale concept, both interchangeable.) That’s about it. The hand puppet shrieks, screams, spits, vomits and fornicates profusely while the audience explodes with laughter so loud and raucous that it echoes from the Booth Theatre through Shubert Alley, all the way to Sardi’s. With Hand to God, the audience is a cause for serious concern.

I looked around. They were on to something, and the rest of us, who could not believe what we were seeing, were not. It did not look like a New York audience. It was the kind of amateur crowd that was pre-conditioned to laugh at anything as long as it made no sense. The show had already transferred from off-off-Broadway to off-Broadway. Finally, it has landed on Broadway itself for reasons as hard to decipher as the Dead Sea Scrolls, laying in the aisles the kind of people who laugh at nude circus clowns in Times Square. Either they were told to be there or be square, or they had seen it before. They were hysterical.

Tyrone the hand puppet cursed God, made obscene jokes about Jesus, and bit the moronic boy’s ear off. The actor was dripping blood and the audience became uncontrollable. I hate puppets, which is why I walked out of the abominable Avenue Q at intermission and never returned. If ever there was a show designed and invented to walk out on, it’s Hand to God, and if ever there have been two hacks from Hell without even one New York microsecond of creative originality or talent, they are writer Robert Askins and director Moritz von Stuelpnagel. But I had to stick around for the second half to see how bad it could get.

“If Jim Henson could see this, he would kill himself,” said one critic during the interval. That’s when the hand puppet went crazy, wrecked the church, broke the ceiling light, demolished the bookcases, grabbed a hammer, smashed one boy’s hand and mashed the mother’s fingers to carrion. Oh, and I forgot to mention the five-minute sex scene, where two hand puppets masturbated, then performed oral sex and hard-core intercourse. Nothing should shock or surprise me anymore, but I draw the line at hand puppets performing oral sex up to—and including—orgasm.

This all happens on a stage where, in better days, discerning theatergoers stood in line to see Julie Harris, Henry Fonda, Shirley Booth, Laurence Olivier and the Lunts. Call me a relic of the past, but if Hand to God is what the theater has come to, then I’m out of it, and happy to be. 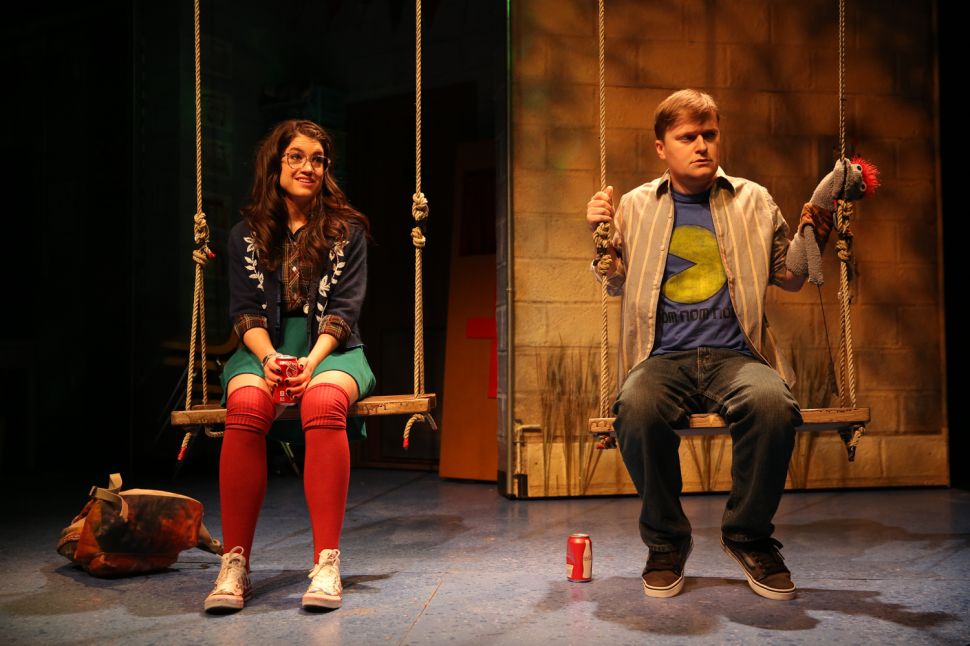