Imagine: You finally get a reservation for that pricey new restaurant everyone’s talking about. You brave the crush at the bar, and then you’re led to an immaculately set table and catered to by a friendly, well-informed waitperson. Then, when the food arrives, you discover the entire meal consists of a small plate of tea sandwiches.

That gastronomic metaphor sums up the experience of Gotham Chamber Opera’s spring offering Friday night. The Tempest Songbook was a pretentious yet puny snack of musical settings of texts from Shakespeare’s valedictory play. Everything was in excellent taste, but from beginning to end the whole thing ran barely 45 minutes.

On paper, this project must have looked promising. Last season, the Gotham Company enjoyed strongly favorable reviews and enthusiastic audience response for a minimalist staging of Toshio Hosokawa’s monodrama setting of Poe’s The Raven by Italian director/choreographer Luca Veggetti. Mr. Veggetti proposed for this season a followup of sorts, a staged version of Finnish composer Kaija Saariaho’s song cycle The Tempest Songbook, in her new adaptation for baroque chamber ensemble. Ms. Saariaho suggested that her brief work (about 20 minutes) could be expanded with selections from music written for a 1667 production of the Shakespeare play.

The resulting sequence of songs, interweaving Ms. Saariaho with incidental music attributed to Henry Purcell, balances contemporary extravagance of range and rhythm with classical charm and restraint.  Mr. Veggetti’s staging, though, felt like a pastiche of avant-garde performance art of the 1980s. The singers, soprano Jennifer Zetlan and bass-baritone Thomas Richards, struck poses in clichés of postmodern couture, a charmeuse slip for her and nubby wool separates for him. The Graham dancers essayed a few timid jumps on the tiny stage of the Grace Rainey Rogers Auditorium but mostly confined themselves to sitting quietly. This was probably a wise decision, since costume designer Peter Speliopoulos had wrapped their heads in mesh bags.

Pulling focus from both singers and dancers was a “video creation” devised by Jean-Baptiste Barrière, a huge globe of what looked like pitted white stone onto which images were projected; mostly live video of the performers only a few feet away. Storm clouds sometimes whirled across its surface, giving way in the last song “See, See the Heavens Smile” to a saccharine film of cheerful children romping in a field.

If you could tear your attention away from these largely irrelevant visuals, you could hear the music performed very handsomely, with conductor Neal Goren drawing crisp rhythms and tangy harmonies from the eight-piece orchestra. Mr. Richards boomed impressively, especially in his opening “Bosun’s Cheer,” which was mostly notated as shouted speech. Ms. Zetlan’s silvery voice flitted gracefully through her varied and wide-ranging numbers.

It’s only fair to note that the audience seemed to take in the program with great zest, listening raptly and then bursting into long and loud applause at the finish. I wish I could share their enthusiasm, but my takeaway from this evening was a sense of déjà vu, and not even very much of that: Call it “déjà glimpse?”

In many ways, The Tempest Songbook felt like the product of a university performing arts program, an impression reinforced by another, much more modest presentation at Columbia University on Thursday. A group called the New Opera Workshop presented a double bill of Handel’s cantata La Lucrezia and John Blow’s masque Venus and Adonis in the tiny Glicker-Milstein Theater, and the result, though rough around the edges, radiated a charm and sweetness that eluded Gotham’s flashier effort.

The performers, undergraduates from many different disciplines, had in common embryonic voices that lacked the bright ring of professional opera singers, as well as a diffident, shy stage presence. Nobody quite knew how to “perform,” but that very lack of expertise revealed glimmers of honest emotion.

It was moving, for example, to see and hear the violated Roman matron Lucrezia as embodied by the very young and vulnerable Devon Mehring. When she was given purposeful movement by the director of this piece, Faith Williams, her voice gained in warmth and resonance.

The longer of the two pieces on this program (which, in contrast to Gotham’s, ran a generous 70 minutes) tells of the love of the goddess Venus for the mortal Adonis and her mourning when he is killed in a hunting accident. Choruses of hunters, shepherdesses and such were taken by a cleanly tuned ensemble of six voices. Christine Rosenblatt’s low-key staging included the witty touch of making Venus’ cupids into smirking mean girls right out of Heathers.

Isabella Livorni, the voluptuous Venus, displayed a quality that is rare even in A-list opera singers, a “smile” in the voice expressive of sheer delight. Her enthusiasm spilled over into the curtain call, when she suddenly bolted offstage to drag music director Yeana Lee out for a well-deserved bow.

There lay the most telling contrast in last weekend’s two presentations: The undergraduates at Columbia found a joy in their simple performance that was sadly missing from the Gotham show. 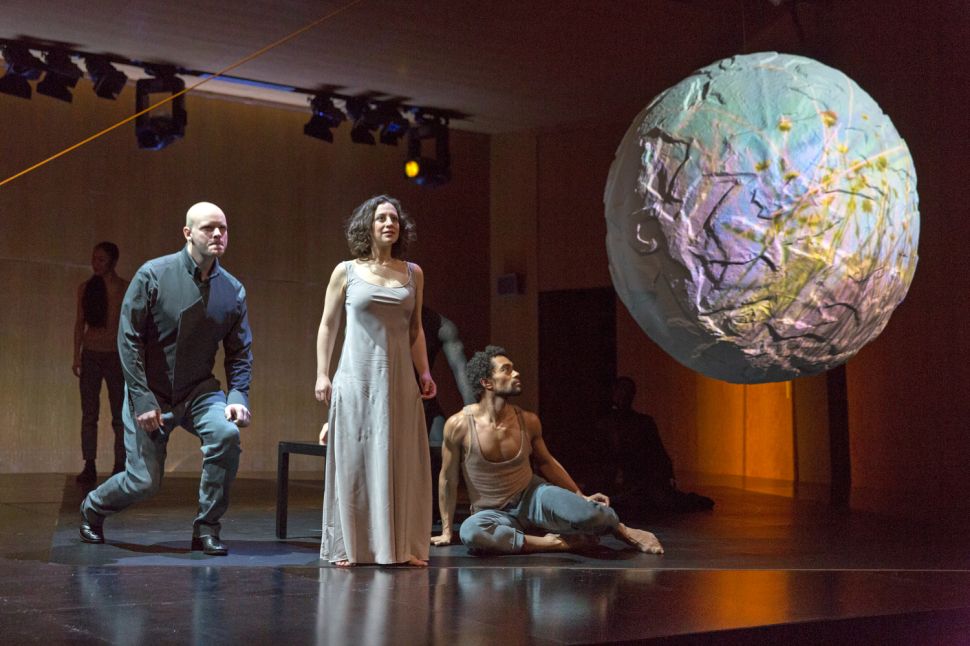