The progressive Democrats who own the City Council and the grassroots activists who celebrated their swift rise are used to being in harmony.

But on Council Speaker Melissa Mark-Viverito’s unequivocal push to add a thousand new police offers to the force, liberal elected officials find themselves in an unfamiliar position—as the brunt of fury from activists on the left.

“One of the major concerns we have is that there hasn’t been a clear rationale or outline as to why these thousand cops are needed,” said Alyssa Aguilera, the political director of VOCAL-NY, a liberal community organizing group. “It’s perplexing in that it doesn’t make sense both from a policy level and the type of advocate we’ve seen Melissa Mark-Viverito be.”

Ms. Mark-Viverito and a large number of council members, including her fellow progressives and the body’s three Republicans, want 1,000 officers added to the NYPD’s 35,437-cop force to carry out what the speaker and Police Commissioner Bill Bratton call “community policing.” As tensions between police and communities of color, in the wake of riots in Baltimore, a shooting in South Carolina and continued resentment here over the Eric Garner case show little sign of dissipating, the City Council and Mr. Bratton hope that more police is the answer.

Following a model briefly implemented under former Mayor David Dinkins’ top cop, Lee Brown, the speaker and police commissioner argue that additional officers embedded in neighborhoods and given more time to fully interact with residents and community leaders will make the police force seem less like an occupying power and more like a collective of benevolent, everyday people who treasure the blocks they patrol.

Even as overall crime continues to plummet, a trend mirrored in cities nationwide, Ms. Mark-Viverito believes now is the time for more police. (She tried last year to boost the NYPD’s headcount, too.)

“We as public policy makers, decision makers, need to be thinking long-term and not just be reactionary,” Ms. Mark-Viverito told the Observer in a phone interview. “The way you get there is with great community engagement, the way you get great engagement is trust, and the way to get trust is proactively engaging people.”

“It’s now a 911-driven system and there’s no more cops on patrol in communities anymore,” Mr. Ignizio said. “There’s an impact that comes with that.”

Mayor Bill de Blasio, a liberal Democrat, has balked at the Council’s push to inch the NYPD’s headcount near the 40,710 size the force enjoyed before the September 11 attacks. But Mr. de Blasio’s opposition has been on fiscal, not ideological, grounds—the new officers would add more than $90 million a year to the city budget.

The irony is that the City Council, once attacked for being too critical of police following their support for the Garner protests, is now being challenged for trying to expand the reach of the NYPD. The belief, among many grassroots organizations, is that additional police is exactly what minority neighborhoods do not need. If the department requires reform, as Ms. Mark-Viverito has said, then unleashing an unreformed police force into these communities will at best do nothing and at worst create another situation like when Garner, a black Staten Islander, died in a police chokehold, activists argue.

An alliance of almost 60 community groups sent an open letter last week to Ms. Mark-Viverito and the Council opposing new police. In addition to VOCAL-NY, left-leaning organizations normally aligned with the speaker including Make the Road New York, New York Communities for Change and the Legal Aid Society signed on to the letter, which said the Council was failing to address the underlying causes of “police abuse and brutality.”

“Adding 1,000 new positions within the police department not only raises significant concerns for communities that have yet to see public accountability for the department, but it also would come at the expense of more beneficial long-term investments in the safety and well-being of our neighborhoods,” the groups wrote.

Ms. Mark-Viverito believes reform of the department can simultaneously happen as new officers are put on the beat. Last week, she drew tabloid derision—and plenty of praise from some of the same groups who signed that letter—for calling on the police department to decriminalize quality-of-life offenses like urinating outdoors and drinking on the street. In a City Hall press conference yesterday, she revealed few additional details of the plan and took issue with the term “decriminalizing”—insisting a civil penalty would be harsh enough for such offenses and unclog criminal courts.

“Let’s change the jargon as well,” she said.

But the Council’s drive to add new police is a rare example of the Democratic pols moving squarely against the progressive zeitgeist. The Nation, the magazine of the liberal establishment and an endorser of Mr. de Blasio’s 2013 mayoral campaign, recently ran an opinion piece speculating on whether a police force is even necessary. As riots engulfed Baltimore following the police killing of another black man, The Atlantic’s culture critic, Ta-Nehisi Coates, wrote that elected officials calling for calm need to acknowledge the profound, bone-deep fear minorities feel toward police.

In New York City, the earliest and loudest opponent of new police officers has been New Yorkers Against Bratton, an activist group opposed to Mr. Bratton and his support of “broken windows” policing, which prioritizes cracking down on smaller, quality-of-life offenses. In March, the group repeatedly interrupted Mr. Bratton’s budget testimony to the City Council and accused his police force of racism and even genocide. They were set to march in Ms. Mark-Viverito’s East Harlem district today.

Asked about the hard-edged opposition to additional police, Ms. Mark-Viverito was dismissive. “I’m not sure anything would satisfy the groups making those claims. They’re not only saying they want more cops but less cops—that’s definitely not acceptable,” she said.

While the anti-Bratton organization occupies more of the political fringe, their main contention that additional cops will not improve police-community relations does have academic support. Some of what the Council wants out of police, like dialogue with civic and religious leaders, already takes place.

“There’s nothing new about community policing,” said Dr. Candace McCoy, a criminal justice professor at the CUNY Graduate Center. “As long as it’s the police calling the shots, so to speak, as long as it’s police determining how safety is pursued in these neighborhoods, rather than the people themselves having any meaningful input, it’s not going to work.”

Gone unmentioned in City Council hearings and rallies is a form of decentralized policing that actually involves civilians in day-to-day crime-fighting. Known as “problem-oriented policing,” the approach was implemented in San Diego with relative success. In this system, police collaborate with residents, to a far greater degree than has ever been seen in New York, to determine where problem spots are in the neighborhood and how they should be addressed. Residents and police even analyze crime maps together.

In the top-down world of New York policing, where a vast majority of decisions are made at the monolithic One Police Plaza, a pure version of problem-oriented policing is probably a fantasy. Police commanders will happily chat with residents at community meetings, warning them about a rash of home invasions or leaving expensive packages inside automobiles, but they will not invite them behind closed doors in the station house to swap ideas about preventing future crimes.

“We’re generally very cynical about community policing as long as the police department is the main agency for it,” said Robert Gangi, the director of the Police Reform Organizing Project. “The City Council is well-intentioned but misses the mark because it still leaves far too much power and authority in the police department.”

As the City Council readies for a battle with Mr. de Blasio over funding the thousand officers, a clash that a handful of pundits deride as the new budget dance, progressives in favor of boosting the NYPD headcount are looking skeptically at those who are outright opposing new cops.

“I have to be honest—I think where one stands on this issue is to a certain extent driven by whether one views police with hostility or not,” said Councilman Rory Lancman, a Democrat who sponsored a controversial bill to make police chokeholds illegal and has also been an advocate for adding a thousand cops. “We’re not animated by our dislike of the police department.”

“It’s also a bit of a Rorschach test for whether or not you want to reform the police department or you just don’t like the police,” he added. 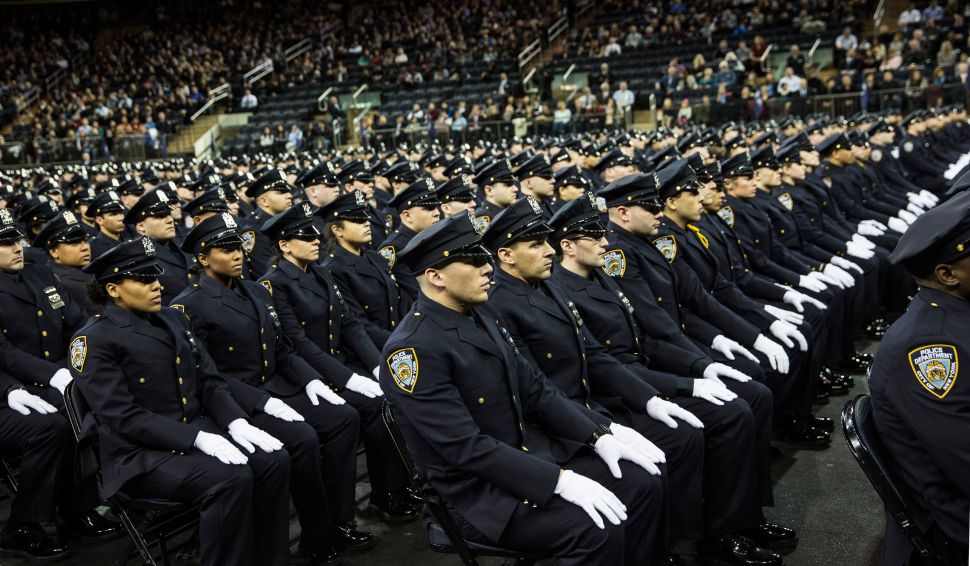