Activists and politicians today laid out an aggressive nine-point plan they argued Mayor Bill de Blasio and Gov. Andrew Cuomo could implement to stem the growing homeless population by the decade’s end.

The Coalition for the Homeless, joined by community groups and labor unions, crafted the proposal, which calls for 10 percent of city-subsidized new housing to be set aside for the indigent along with at least 2,500 of the New York City Housing Authority‘s yearly vacancies, a new city and state program to create 30,000 units of housing for homeless people with substance abuse issues and mental disorders, and greater subsidies from Albany to assist struggling renters. It also demands the passage of laws guaranteeing renters an attorney in housing court, a $15-an-hour minimum wage, more construction projects employing union workers and local residents, more supportive housing for people with HIV, and an end to former Mayor Michael Bloomberg’s “cluster-site” housing—where the city paid landlords $3,000 a month to put up homeless families, often in deplorable conditions.

“It is no secret that New York City is in the midst of a housing crisis that affects people in every neighborhood throughout the five boroughs,” the report reads, noting that 60,000 families and 25,000 children hole up in the shelter system each night, the highest numbers since the Great Depression. “Our city must provide homes for every New Yorker in need. That is why a new campaign has come together to develop this report and ensure that the de Blasio and Cuomo administrations take action.”

Among the electeds on hand was Public Advocate Letitia James, who broke with the mayor on the issue of increasing set-asides for the homeless in NYCHA. The mayor ended his predecessor’s policy of not reserving any units for homeless people in the city’s sprawling public housing complexes, but has maintained they cannot offer them more than 750 apartments a year—and Ms. James indicated she wanted more.

“The best way to deal with homelessness to provide someone with a home,” she said. “We have control over thousands and thousands of public housing units that should be going to the most vulnerable and with the most immediate housing needs.”

Many of the recommendations made today reiterated points the Coalition for the Homeless raised in a report released last month.

The report criticizes the mayor’s NYCHA and affordable housing policies as insufficiently expansive and inclusive, but echoes many of his calls for the governor to make greater budget allocations for struggling renters and the indigent.

In particular, the group joined Mr. de Blasio in blasting Mr. Cuomo’s reduced allocations for the New York/New York program, a joint city and state venture that creates housing with supportive social services for troubled persons, and which has been renewed every ten years since the Dinkins administration. Mr. Cuomo’s recently negotiated state budget only provided funds for 3,900 new units under the program, a sharp drop off from the 9,000 built in the program’s previous incarnation and less than a tenth of what the plan released today argues are needed.

The Coalition for the Homeless employs consultant Berlin Rosen—a firm with close ties to Mr. de Blasio—as its press representative, while other groups involved in the report like Make the Road and New York Communities for Change are linked the the mayor’s allies in the Working Families Party and in the labor movement.

New York State’s constitution guarantees housing for all people, obligating municipalities to supply shelter to any one who asks for it. 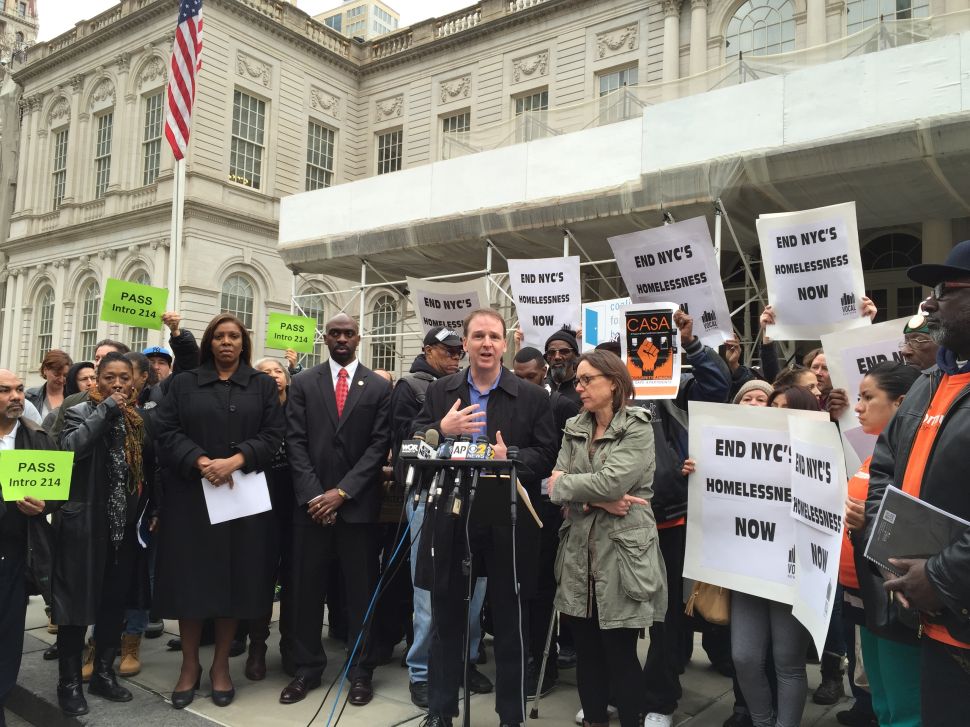