An estimated annual pay check of $10 billion will be added to the city if the minimum wage increases to $15 an hour, according to a new report by City Controller Scott Stringer. However, omitted from the report the affect a minimum wage increase would have on businesses–some claim they would be unable to afford to pay higher wages and keep their business intact. “We have one of the lowest minimum wages and the highest costs of living in the United States,” Mr. Stringer said. “It’s actually a travesty of justice. People are struggling trying to live.” (Daily News)

Posters have appeared around Hillary Clinton’s campaign headquarters in Downtown Brooklyn. A portrait of Ms. Clinton’s face dons the posters, accompanied by banners stating “Don’t say” at the top. Beneath the sign, adjectives like “ambitious”, “inevitable”, and “polarizing” have been cropped up. The people behind the posters, so far, remain anonymous. (New York Times)

A Ukrainian restaurant across from the site of the East Village explosion, named Stage Restaurant, is being evicted for siphoning illegal gas. The cause of the March 26th explosion, which left two dead and 19 injured, may have been caused by the landlord tapping pipes for gas illegally. (WNYC)

A 16-year old girl was sexually harassed by a Times Square worker dressed as the Cookie Monster on Sunday. Ranulfo Perez, 48, forcefully yanked her towards himself and groped her and was subsequently arrested, charged with forcible touching in a manner injurious to a child less than 17, plus second degree harassment. Mr. Perez joins a multitude of other costumed characters who have been arrested in the past few years for disorderly conduct or harassment charges. (Gothamist) 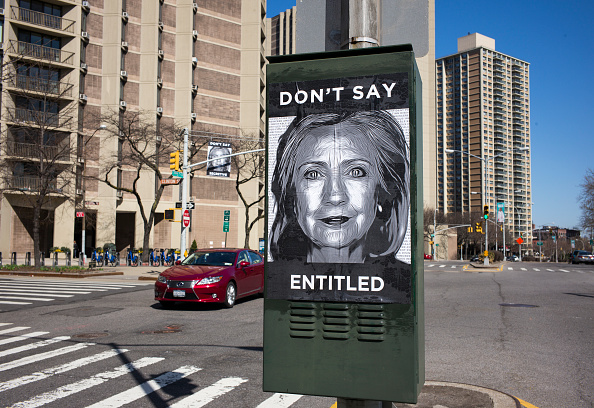