A third of the construction workers at NYU’s Abu Dhabi campus faced abusive conditions, according to a report commissioned by the school. These workers, employed by local contractors, were not covered under NYU labor guidelines and so were forced to work overtime without compensation, live in squalid conditions and surrender their passports to their employers. The implementation of standards was flawed, and the workers constantly faced the threat of deportation. Investigators recommended that the school abolish the exemptions that allow workers to remain uncovered and punish employers who violated the standards. NYU President John Sexton said the school took “full responsibility” for the error, which was “inconsistent with the project’s publicly stated commitment.” (Gothamist)

The office manager at a Bronx dentist’s office was arrested Thursday after it was discovered that she performed procedures on patients while the doctor was away. Valbona Yzieraj, 45, who worked at Ultimate Dental Care of Riverdale in the Bronx, told patients she was trained in her home country of Albania, unbeknownst to her boss, Dr. Jeffrey Schoengold, who had found her on Craigslist. Ms. Yzieraj, who called herself “Dr. Val,” performed root canals and tooth extractions, which caused pain and infection to patients. Dr. Schoengold fired Ms. Yzieraj when he discovered her deceit, and she then tried to steal $20,000 from him. Ms. Yzieraj has been charged with assault, reckless endangerment, attempted grand larceny and unauthorized practice. (Wall Street Journal)

The city is housing 13 convicted sex offenders in a boarding house on East 30th Street, which has six schools within a five-block radius. One of these men, Rodney Stover, was arrested for allegedly raping a woman at a local bar, and others have sexually abused children as young as six years old.The shelter houses 850 men in all. Residents refer to the boarding house, which houses 850 men in all, as a “fucked up building” and to the baker’s dozen of rapists as a “nasty infestation.” (New York Post)

Public recycling bins are becoming a health hazard, with refuse spilling on the street and rats taking up residence. City officials say the side doors of the bins are often left wide open by sanitation workers, allowing animals easy access to the rubbish. Once the bins are full, city sidewalks become the dumping ground for take out containers and soda bottles. The 332 recycling bins located throughout the city are only emptied twice a week. (DNAinfo)

Travails of the super-rich: Demi Moore is selling her three-story penthouse tower overlooking Central Park. The actress is asking a record $75 million for the San Remo castle-mansion. The manse comes complete with a lobby-level maisonette. Ms. Moore and ex-husband Bruce Willis bought the house from Saturday Night Fever producer Robert Stigwood in 1990. Bonus for the buyer: Bono is your next door neighbor, so you can ask him what he was thinking when he composed the score for the Spider-Man musical. (Gothamist) 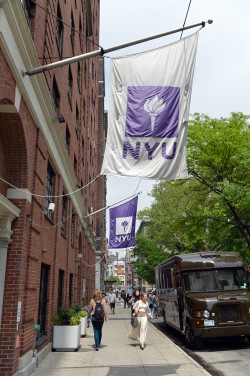