Gov. Andrew Cuomo admitted today he hates running for re-election, comparing the process of subjecting himself to voters to teachers who resent strict evaluations.

But Mr. Cuomo said both are necessary–and continued to knock the teachers’ unions for resisting his education reforms.

“I do not want to be evaluated. I will tell you a secret: I don’t like it, I don’t like that I have to run for re-election,” Mr. Cuomo told Susan Arbetter on the Capitol Pressroom radio program. “If I have never done it before in my life, this is traumatic to me. I have a school teacher who basically said to me, ‘Look I’ve been teaching for 15 years and now I’m gonna be evaluated.’ It is very upsetting and frightening, I understand that.”

“Now all of a sudden there’s gonna be an evaluation of them. I get it. But change is traumatic, change is also how you progress,” he added.

Mr. Cuomo, a Democrat, won re-election last year, besting an underfunded Democrat in the primary and a long-shot Republican in the general election. He rarely campaigned in public or interacted with voters; he preferred large, and easily-controlled, campaign rallies. The city and state teachers’ unions did not endorse his candidacy.

Earlier this morning, the State Senate and Assembly passed a state budget for the 2015-2016 fiscal year, a $150 billion spending plan that drew plenty of praise and scorn. Mr. Cuomo, a fierce critic of the teachers’ unions, sought to boost charter schools, reform the teacher tenure and evaluation process, and make it easier to shutter failing schools. He hailed the outcome of the budget, even though union-aligned Assembly Democrats were able to curtail at least some of the reforms he sought.

“The teachers’ union is a very powerful political force in Albany. They’re probably the largest single donor to the politicians in Albany,” Mr. Cuomo said. “They like the status quo.”

Mr. Cuomo wanted to tie 50 percent of a teacher’s rating to student test scores and reduce the weight of principals’ observations, which tended to be favorable to teachers. Ultimately, the budget did not include percentages for how much particular measurements will count–the State Education Department will decide instead.

But it does make it slightly more difficult for teachers to achieve the highest rating, and it mandates low ratings in certain circumstances. Principals can still weigh in with their observations, but so must an evaluator from outside the school. Teachers, in addition, will have to wait four years, instead of three, to achieve tenure. 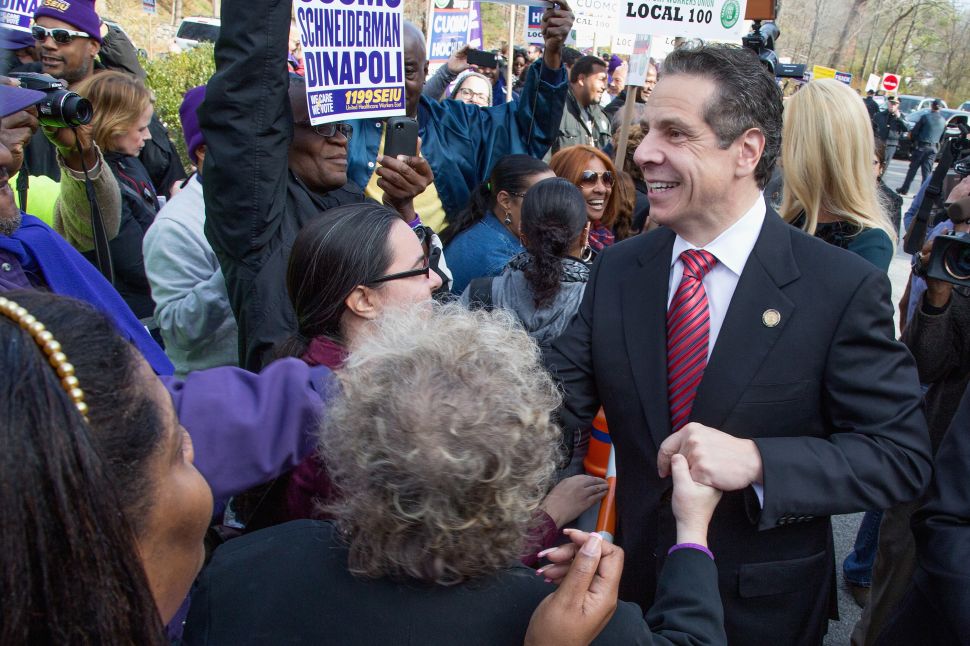