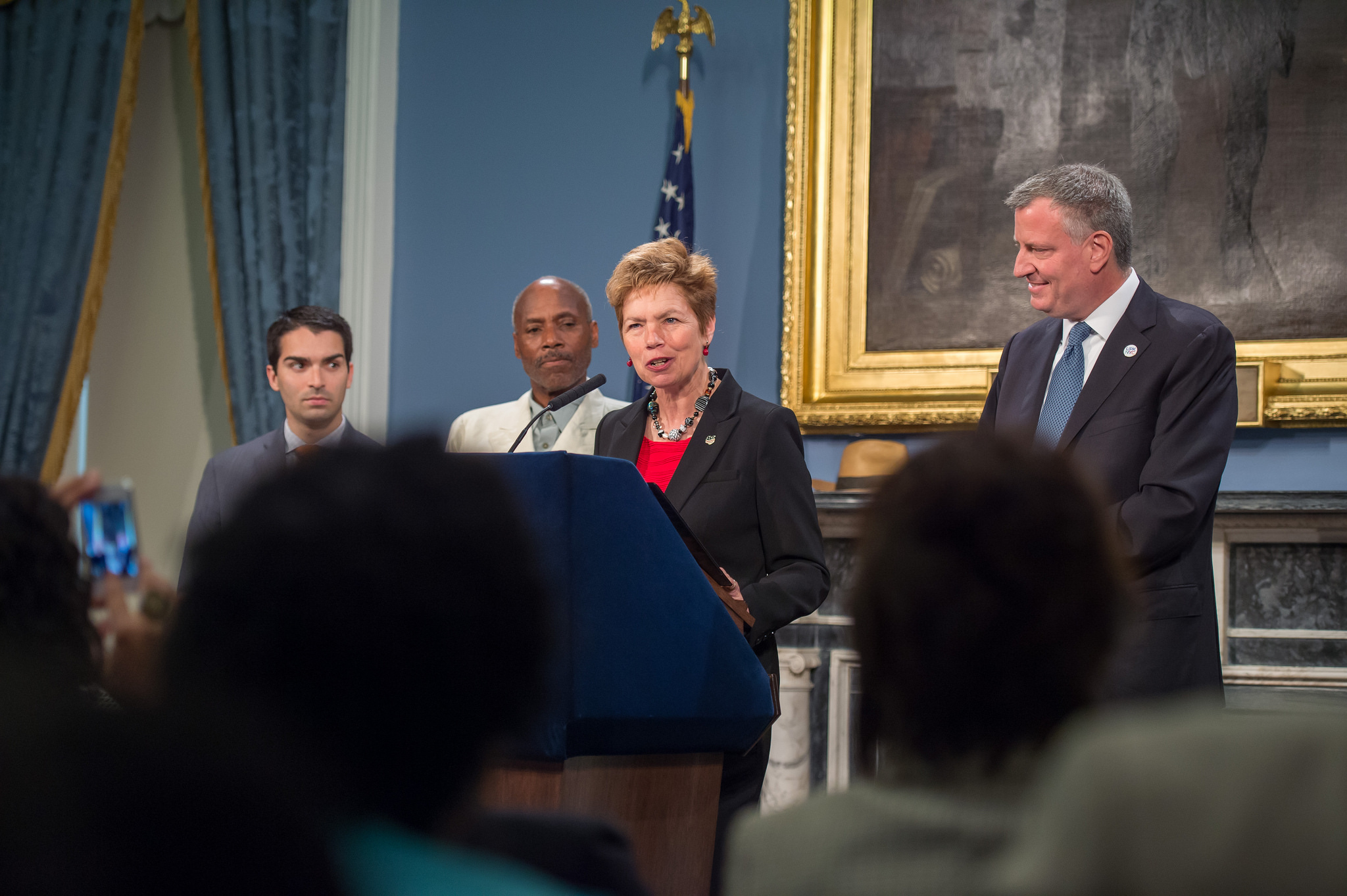 On the steps of City Hall, veterans groups gathered on a sunny afternoon to air their grievances with Mayor Bill de Blasio.

“So far, Mr. Mayor, you haven’t met with us once since you’ve been in office, not once. You haven’t even met with your own Veterans Advisory Board. You’ve met with the horse carriage drivers. This week you’ve met with voters in Nebraska and Iowa. But you haven’t met with us once,” said Paul Rieckhoff, founder of the Iraq and Afghanistan Veterans of America. “But it’s not about meetings. It’s about action. And sadly, there’s been none.”

Inside City Hall just a few hours earlier, Veterans Affairs Commissioner Loree Sutton, a retired Brigadier General in the United States Army, was surprisingly chipper for a woman whose tiny Mayor’s Office of Veterans Affairs—with six staffers including herself and a budget of only about $600,000—was set to come under fire from those it was designed to help.

“New York City has the best veterans advocates ever, so this is energy, this is concern. I would be far more worried if there was no reaction, if this was just hum drum,” Ms. Sutton, who speaks with bounding enthusiasm and a near-constant smile, told the Observer in an interview. “I think the veteran advocates rightly want to be heard.”

It also comes as the City Council proposes doubling the meager budget for the Mayor’s Office of Veterans Affairs, or MOVA—which right now spends almost all of its small budget paying its tiny staff, rather than administering any programs of its own. The goal of the office, city officials say, is to connect the city’s 200,000 veterans with benefits and help that already exist elsewhere—but the veterans groups rallying today called for the expansion of the office into a full-fledged department that could provide services itself.

“All we have is a pathetic $600,000 budget at MOVA, and no real programs,” Mr. Rieckhoff said. “The new Veterans Commissioner Loree Sutton is an outstanding leader… but she can’t do it alone. Mr. Mayor, you and the City Council must lead for our city’s veterans.”

Kristen Rouse, who served three tours in Afghanistan and is the director of the NYC Veterans Alliance, said half of that funding comes from the state government.

“That means New York City in actuality is spending only $300,000 in city tax dollars to connect nearly a quarter of a million veterans with the benefits, the services and the appreciation that they earned throughout their military service,” Ms. Rouse said. “That’s little more than one dollar, per year, per veteran that the city is willing to spend. We shouldn’t have to ask our mayor to allocate more than a dollar per year for each of us who have served our country.”

Likewise, she deemed Mr. de Blasio’s State of the City pledge to end homelessness among veterans “misleading” because its funded fully by a federal grant—not any new city investments. City Hall defended the initiative.

“The boots on the ground are city employees. With Federal assistance, they are doing the hard work every day to solve an important issue facing veterans,” spokesman Peter Kadushin said.

Veterans also assailed Mr. de Blasio for failing to back an expansion of a pension buy-back system for veterans last year. Under current law, vets who served in Iraq and other prior conflicts can get credit for three years toward their pensions if they enter civil service, but those who served in Afghanistan can’t. In a letter to the governor urging a veto, Mr. de Blasio’s office last year said the expansion would also include peacetime vets and be too costly.

“He felt it cost too much,” said Tireak Tulloch, a Marine Corps veteran from Brooklyn said during the rally. “There’s no other words that need to be said.” 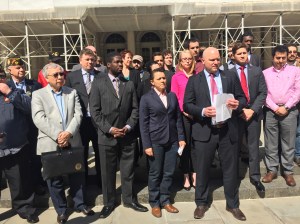 The lack of resources for veterans, then, was a running theme at the rally. In seapking with the Observer, Ms. Sutton discussed working with other city agencies—Small Business Services, Homeless Services—to leverage their resources in helping veterans by connecting them with jobs or shelter. She spoke of working with the Department of Correction to work at better identifying veterans when they’re arrested (last year, a homeless vet died in an overheated Rikers Island cell). She said she’s working with the Department of City Administrative Services to help place veterans in jobs there that are expected to open up due to retirement.

But when it came to getting a bigger budget to provided more services in-house, Ms. Sutton spoke carefully.

“You know, it’s interesting, I came in to this position knowing that this mayor and this administration would commit whatever support, whatever tools, whatever resources are needed. What I promised the mayor first off was ‘Sir, we’re gonna make, first off, best use of the resources we have,'” Ms. Sutton said. “And that’s what we’re doing right now.”

Pressed again on whether she could use a bigger budget, Ms. Sutton said, “I don’t know of a single commissioner who would say ‘Ive got enough money.’ So we’re going to continue to go down that road and I’m confident that we’ll get everything we need to do the job.”

Ms. Sutton began her tenure with a 90-day review of the office, which veterans groups argue they have never seen. City officials say Ms. Sutton has briefed the mayor and testified to the Council, and Ms. Sutton said the review helped her establish relationships with those other agency partners.

“Loree Sutton’s cell phone number is not a way to connect 200,000 veterans in this city. We have real programs, real websites, real mechanisms to the point where the city can help us scale those,” he said, adding his organization helped many more vets annually than MOVA.

Ms. Sutton, meanwhile, cited instances in which MOVA had helped people. She recalled a veteran with post-traumatic stress disorder attending a funeral, only to be caught up in an NYPD crime scene in which his car was shot. The office got him help, she said, and a rental car. In another instance, a military member “wandered” into MOVA on terminal leave, meaning he was about to be discharged from the armed services. He was lost at what to do next, she said.

“We don’t want to just take it by chance that veteran happens to find us. That’s why we’re excited about now really reaching out and engaging,” Ms. Sutton said.

Veterans advocates largely praised Ms. Sutton, who has met with hundreds of groups since she was appointed last year, but argued the mayor had not given her the resources to do anything more than a ceremonial job—and hadn’t been involved himself.

“I think she’s doing the best she can with the limited resources she has, and I think she deserves a lot more help from the administration,” Councilman Eric Ulrich, a Republican and chair of the council’s committee on veterans, said. He said he hoped the rally would be a “wake-up call” for the administration to do more.

Ms. Sutton noted Mr. de Blasio’s wife, Chirlane McCray, joined her on a two-day tour that included stops at the Veterans Administration hospital in Brooklyn and Fort Hamilton to talk with spouses of active duty military members. Ms. McCray has made mental health a signature issue, Ms. Sutton was an Army psychiatrist. But asked whether the mayor himself could be more visible on the issues, Ms. Sutton said: “Absolutely. We are just getting started.”

But she didn’t doubt his commitment. Her childhood mentor, Corporal Desmond Doss, had served as a medic in World War II at Okinowa, where Mr. de Blasio’s father had been seriously wounded.

“My childhood mentor more than likely was the medic who saved the mayor’s father’s life. So we have a very deep bond that sort of galvanized our relationship to begin with,” Ms. Sutton said. “He has then been very public in the community in what it’s like to be the child of a military veteran who brought the war back with him.”

“As the son of a veteran injured in combat, Mayor de Blasio personally understands the importance of caring for those who have served. This strong commitment can be clearly seen from our plan to end veteran homelessness; MOVA Commissioner Loree Sutton’s collaboration with the First Lady on mental health issues, including the needs of veterans; and Commissioner Sutton’s regular conversations with veteran’s organizations,” Mr. Kadushin said. 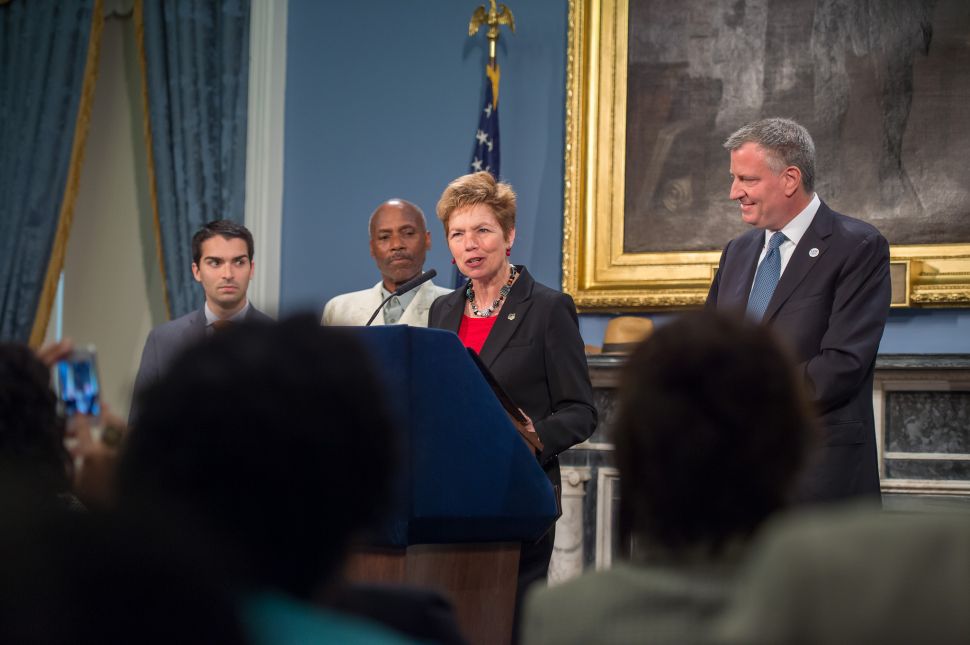