Once known for fruity beer and the unpopular vegetable bearing it’s name, the city of Brussels is now ready to take on the world–well, the art world at least.

Yesterday the Belgian capital kicked off an exceptional art week centered around the opening of Art Brussels, the 33-year-old fair with a strong focus on international contemporary art. “The little fair that could” has rebranded and expanded over the years, now boasting 200 galleries from around the world.

Most notably, the fair seems to have attracted a cornucopia of New York City galleries, from blue-chips like Barbara Gladstone (who has an outpost smack in the middle of downtown Brussels) to the young and hip, such as Brooklyn’s The Journal Gallery which is doing the fair for the first time. As a matter of fact there are 20 first-time galleries at Art Brussels that hail from the big bad Apple and many of their exhibited artists are New Yorkers that range from youngsters like Lauren Luloff to national treasures like Jim Hodges (both of whom have solo presentations at the fair.) Meanwhile, hot New York-based artists like Zak Kitnick and Sofia Leiby will be opening shows at local galleries during the fair, as will the likes of legendary New York-based painter Eric Fischl.

So what gives? Is Art Brussels just another symptom of the art world’s new money spillover, or is the city actually becoming a new fixture (like Miami and Venice) on the map for art-savvy New Yorkers?

Day one in the city began at the sun-filled loft space of super-cool Belgian collector Alain Servais who opened his doors for guests to view a curated selection of his collected works that come from outside the first world art market. The show included art from South America, Asia, and Africa and ranged from megastars like Colombia’s Oscar Murillo to lesser-known artists like Algeria’s Fayçal Baghriche. It seemed like an appropriate start to the day, as friendly Belgian outreach was a repeated theme during the fair.

“Brussels is not New York” said Servais to the Observer. “For a fair or a gallery, you have to think about Brussels, not as just the Belgian collectors, but as a european continental base. If you’re trying to bring in people from Frankfurt, Paris, and beyond… then it works.”

Shortly afterwards, gallery night kicked off with an international throng of art patrons winding through the adorable Belgian streets to see over 20 different gallery openings.

Many New York artists and even galleries were positioned front and center. Belgian favorite Galerie Rodolphe Janssen was an impressive stop that offered up a doubleheader of shows by New Yorkers Lucas Blalock and Alex Perweiler. The scene was crowded yet gentle as both Northern and Southern European languages bounced around the room at respectable volumes. Young Belgian spaces like Office Baroque and Super Dakota also impressed alongside local heavyweights like Xavier Hufkens.

Later we hit the gorgeous Belgian townhouse branch of Barbara Gladstone, who was presenting a show by Karma New York in a teaming up of Manhattan power galleries. Karma has seemingly gone from bookstore to star-powered gallery (and bookstore) overnight, and the art deity Gladstone rightly took notice. The show, which featured a host of artists like Torey Thornton and Matt Connors, did not disappoint.

“It was a nice chance to show a close-knit group of New York City-based artists that we’ve showed at the gallery” Karma proprietor Brendan Dugan told us. “The collectors here are really inquisitive and passionate, and the welcoming vibe of the fair lets all these gallery and museum shows sort of all work together in an interesting way.” 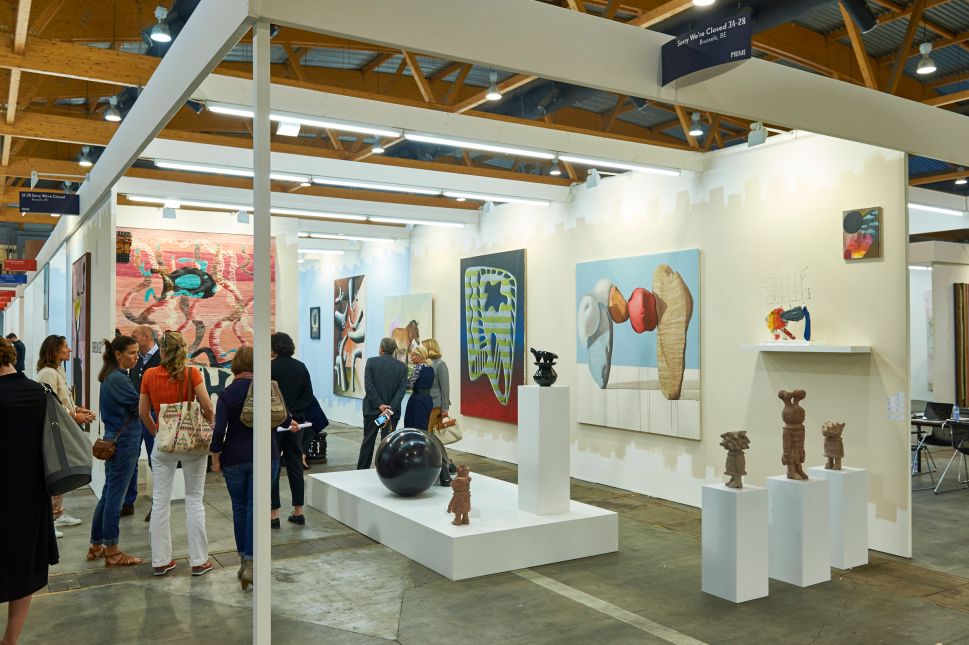