The mind wants to breathe, to be free. It craves unobstructed views: of oceans, forests, deserts, mountains. It longs for the timbre of soft wind, the bird’s pirouette in calm blue skies. To breathe, and breathe deeply. It is tired of racing, of guessing. Of swiping and endless scroll. It is sick from artificial light, from trying to keep up. It longs to see things as they are, to focus on particulars, to connect—to people, to art, to ideas—for longer than modern life allows.

The mind is reacting, of course: It requires frenzy to savor calm, chaos to relish serenity. Few can afford to luxuriate in profound beauty or deep thought for more time than paid leave warrants, and even fewer could do so long without growing bored. So we lunge back into cities and routines, tempting our neuroses. We’re social, so we need people despite the confusion they engender. We’re driven, thriving when a thousand obstacles litter our paths, the taming of which is sublime.

So what the mind actually wants is freedom in the middle, to flourish in the liminal space between fast and slow, to make poetry of chaos.

The last few weeks have pushed my mind to its brink, and Benoit Pioulard’s new ambient collection Sonnet has at times been the only thing standing between me and a tall cliff. Competing deadlines have rattled, existential duress has beckoned—in concert they can be paralyzing. Breathing routines, exercise, sleeping pills, and early alarms only do so much good. A valve needs turning, the tension diffused, so I reach for Sonnet, a weightless tapestry of soft distortion loops that drift through my mind like a breeze. Sharp edges soften, harried neurons relent, my racing pulse slows: Clarity, or at least a tension eased, for 14 songs.

In 1978, Brian Eno had something similar in mind when he wrote the liner notes to Music For Airports / Ambient 1. “Ambient Music must be able to accommodate many levels of listening attention without enforcing one in particular,” he wrote. “It must be as ignorable as it is interesting.” Sonnet’s handsome instrumentals channel the calm tension Eno describes well. They’re like little dreams: elegant and imagistic, beatless and slow, wandering from one room of the mind to the next. You focus on them, then you don’t, but your chemistry is nonetheless altered under their light sway. On bustling streets, rickety trains, or walks through the park, Sonnet tints the air, the detritus and beauty at each turn drenched in hues both sweet and haunted.

Benoit Pioulard is not a real person, nor is his creator French. Pioulard is 30-year-old Thomas Meluch, a musician and photographer from Michigan who lives with his wife in Seattle. Meluch draws inspiration from hiking, photography and artists such as Eno and William Basinski, and he’s written that several pieces of Sonnet “are recreations of harmony loops that [he] heard in a series of extraordinarily vivid dreams, and then woke up and recorded.”

Meluch, in other words, doesn’t write Muzak, something intended to be ignored yet numbly comforting—he creates art from a place of deep-seated intimacy. As Eno suggests elsewhere in his notes, the point of ambient music isn’t to “strip away all sense of doubt and uncertainty,” as Muzak does by reducing familiar art to background dross, but to “induce calm and a space to think.” Sonnet can’t alter chaotic schedules nor quell existential anxieties, but it can press hard enough against them to nurture perspective again, to tame the mind’s wild horses.

Like all good ambient work, though, Sonnet is far more than a salve: Meluch’s dreamy sound collages stand alone as art worthy of deliberate listening and critique. Where many ambient/instrumental collections serve as little more than audible wallpaper, predictable and banal, Sonnet has a very human imprint. The moods shift, the performances are imprecise, the songs float from a guitar amp straight to analog tape. Titles such as “An Image Apart from Ourselves,” “So Etched in Memory,” and “Whose Palm Create” also suggest sincere expression—an attempt to stir more introspection than one might get from, say, some vaguely Huxley-ian Serenity Spa Mix, all default synth patches and false optimism.

The mind doesn’t need soma, after all, nor other deadening palliatives or technology or Muzak. It longs to wrestle with complexity, to overcome. Often the chaos is too much, though, so art becomes a sturdy refuge, a conduit through which we make sense of trouble. Sonnet is a balm, then, not a distraction—all calm breezes amid raging storms. It softens life as it exists. 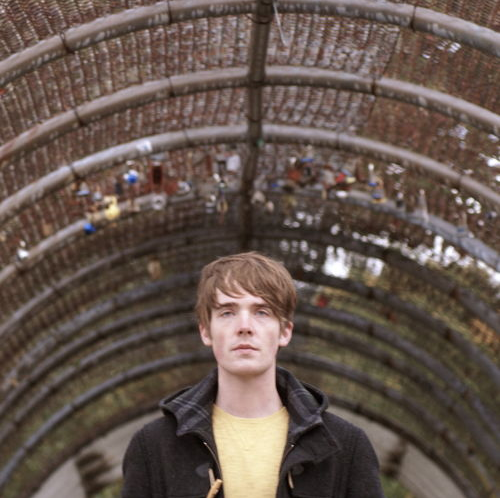