Vermont Senator Bernard Sanders delivered a fiery yet statistics-laden speech on income inequality to the convention of Rev. Al Sharpton’s National Action Network today, and laid out an aggressive left-wing national agenda—but neglected to mention the speculation he’ll run for the White House in 2016.

Despite his introduction from Mr. Sharpton as “the face of progressive politics in America” and a potential candidate for the presidency, the self-identified socialist—first elected to the House of Representatives in 1991—boasted to the audience at the Sheraton New York Times Square Hotel about being the longest-serving federal legislator not affiliated with either major party in American history. The Brooklyn-born New England politician then lambasted what he described as the “ugly and obscene” state of America’s affairs.

“Let me be blunt with you today. You ready to hear some blunt talk? Our country today faces more serious problems than in any time since the Great Depression,” he said. “One of the things we do not do as a nation, and it may be the most serious crisis of all, is discuss the serious crises. So let me lay it on the line for you.”

After noting that 11 percent of the population is either underemployed or unemployed, that black youth unemployment is the highest in America and that one third of black men born today are expected to at some point enter the criminal justice system, he lashed out at one of Mayor Bill de Blasio’s favorite foes: income inequality.

“As serious as all those issues are, let me be very blunt with you and tell you what not a whole lot of people will tell you: there is one issue even more serious than all of the issues that I’ve mentioned, and that impacts all of the issues that I have mentioned. And that is income, wealth inequality in America, which has reached grotesque levels,” he said, noting that 45 million Americans and 18 percent of children live below the poverty line. “In America today, not far from here, we have a financial system dominated by a handful of Wall Street firms who drove this country into the worst recession in the modern history in America. And these Wall Street firms have shown themselves to be motivated by greed and by recklessness, and illegal behavior, and enough is enough.”

Mr. Sanders then laid out an ambitious progressive platform for America, without alluding to the nation’s highest office or how he might institute his proposed reforms.

The lawmaker called for a $1 trillion investment in infrastructure to create 13 million jobs, for a $15-an-hour minimum wage, for universal single-payer healthcare, the rewriting of free trade treaties and for strict campaign finance reform. And, though he did not position himself a future chief executive, he did allude to the trust-busting policies of President Theodore Roosevelt as a model to follow in dealing with big banks.

“You know what Teddy Roosevelt would do? He’d break them up, and that’s what we need to do,” he said.

Mr. Sanders also said he would soon put up a bill to make tuition free at all public colleges and universities nationwide.The politician drew repeated applause and expressions of affirmation from the overwhelmingly African-American audience—whom he referred to as “brothers and sisters”—despite representing a state that the 2010 census found to be only one percent black.

He concluded with a final populist salvo.

“At the end of the day, if we want to end income and wealth inequality, what we have to say to the largest corporations in this country, that are drawing record-breaking profits, what we got to say to the millionaires and billionaires that are doing phenomenally well, we got to say ‘welcome back to America. You got to start paying your fair share,'” he said. “What I urge, and it’s not an easy fight, is we’ve got to have the courage to stand up to the billionaire class and say that this country belongs to all of us, not just you. And when we do that, we can create an America that works for all of us, all, and not just a handful.”

Mr. Sanders told the Nation magazine in March 2014 that he was “prepared” to run for president. Despite not formally declaring his candidacy, he has toured the country attacking the wealth gap 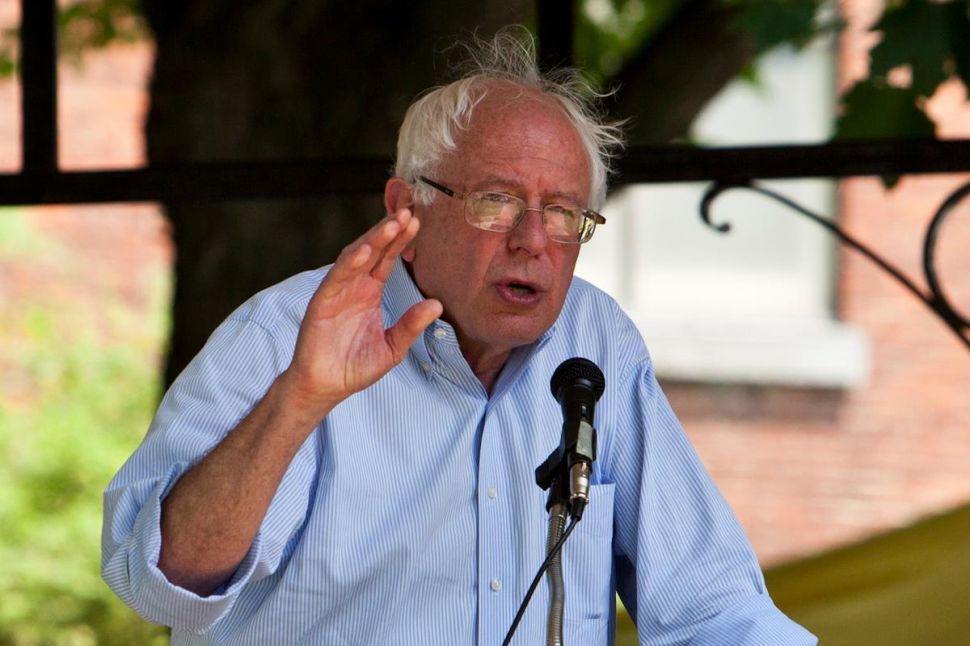