Maybe he should stop meeting the Mets.

Mayor Bill de Blasio, clad in a pinstriped New York Mets jersey and cap, was loudly booed again at a Mets home opener, this time without even standing on the pitchers mound.

The boos reigned down on Mr. de Blasio this afternoon as he remained near the Mets dugout with the families of Rafael Ramos and Wenjian Liu, the NYPD officers murdered last December. Mr. de Blasio was the first “dignitary” to be introduced and was the only one to be booed. Congressmen Joseph Crowley and Eliot Engel, along with Queens Borough President Melinda Katz and Queens Councilman Paul Vallone, received little reaction.

The Liu and Ramos families were at the Mets game against the Philadelphia Phillies to throw out the ceremonial first pitches. A member of the NYPD, Lauren Leggio, sang the national anthem. NYPD choppers flew over Citi Field after a large American flag was unfurled in the outfield.

Last year, Mr. de Blasio was tasked with throwing out the first pitch at the Mets opening day game against the Washington Nationals. Mr. de Blasio, a Democrat, threw a decent ball but was booed by the Mets faithful–a New York tradition of baseball fans jeering mayors.

Mr. de Blasio, again wearing a jersey with his own name on the back and the number 6 of his childhood hero, Boston Red Sox infielder Rico Petrocelli, took all the booing with the smile. 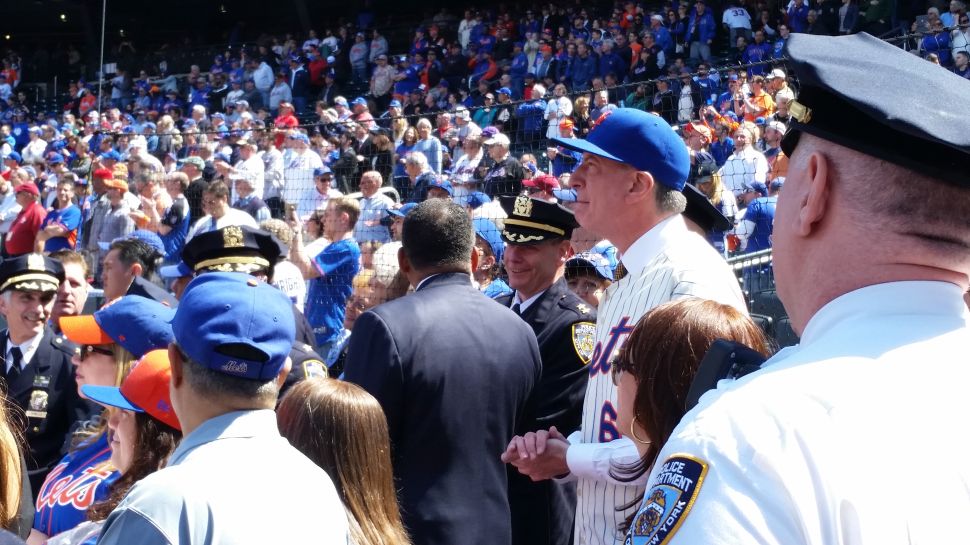