Garbage bags piled up on city sidewalks can feel as much a part of the scenery as the dirty dog vendor or the newspaper hawker. But if Mayor Bill de Blasio has his way, a whole lot of it—trash, that is—will disappear.

Mr. de Blasio rolled out a “Zero Waste” plan today as part of his One New York program, a new name he gave to former Mayor Michael Bloomberg’s PlaNYC, the blueprint for long-term city infrastructure and environmental planning. The proposal calls for the city to reduce all of its solid waste by 90 percent by 2030—sending none of it out of state to be buried in landfills, which has been the practice since the closure of the massive Fresh Kills Landfill on Staten Island in 2001.

Sending no waste to landfills means the bulk of it has to go somewhere else—mainly, as Mr. de Blasio said, to recycling plants and back to nature through composting. But the city will have an astoundingly long way to go if it wants to achieve Mr. de Blasio’s zero waste goal on the timetable he outlined. New York City’s recycling rate is dismal—just 15 percent, less than half the national average of 34 percent. And composting here is a fledgling enterprise, with small pilot programs already running into logistical challenges—with no local facilities to handle the organic waste, it’s sent to Delaware, where it was overwhelming sorting systems due to large amounts of contamination with plastic, according to WNYC.

“One man’s trash is the other man’s treasure, is the old expression, so between re-use and recycling and composting, it certainly is theoretically possible to get close to the target that the city has defined,” Mr. Goldstein told the Observer in a telephone interview. “And it’s inspiring to set an ambitious target, even if we don’t get there on the time-table projected. But it’s also very important to set intermediate benchmarks, to make sure that we’re making progress along the way.”

Mr. de Blasio’s plan calls for the city to “track the extent of our waste reduction and how much we divert away from landfills” over time. The plan also calls for the city to implement single-stream cycling—which allows residents to throw all their recyclables in the same bin, theoretically making it easier to recycle—by 2020.

The best example of a municipality getting close to zero waste is San Francisco, which has reduced the amount of trash it sends to landfills by about 80 percent, Mr. Goldtsein said—just 10 percent short of the 90 percent goal New York City has now set. (The term “zero waste” is a bit more aspirational than practical—city officials allow that there will always be some waste that can’t be recycled or composted, but in small enough quantities it will no longer need to be sent out of state to landfills.)

The New York League of Conservation Voters today heralded Mr. de Blasio’s plans—much of it One New York’s environmental agenda is similar to the group’s own recommendations—but struck a similar note of caution about benchmarks. It asked for more details about the cost of the initiatives, which agencies will oversee them, and metrics for measuring their success. Mr. de Blasio has promised there will be details on how he intends to pay for all these initiatives—the wide-ranging report also calls for things like lifting 800,000 New Yorkers out of poverty in 10 years—in his executive and capital budgets, set to be released May 7.

“Landfill diversion is a critical component of the city’s 80-by-50 goal and it’s fantastic to see the Mayor giving it the attention that it deserves,” NYLCV President Marcia Bystryn said in a statement, referring to a plan to reduce carbon emissions by 80 percent by 2050. “We believe we can reach zero waste, but it will require a great deal of focus and innovation to get there.”

Mr. de Blasio said today he knows some people might be skeptical. “Look, I don’t blame anyone that’s cynical. I represent 8.5 million jaded people,” he cracked. But he said it was necessary.

“The whole system was built on a bankrupt idea—that you produce a huge amount of waste and you go send it to a landfill in another state. That is ludicrous. The whole notion of a society based on constantly increasing waste and then putting it into a truck or a barge or a train and sending it somewhere else—you dig a big hole in the ground, you put the waste in the ground—that is outrageous and is outdated, and we’re not going to be party to it,” Mr. de Blasio said.

But the city is party to it—right now, right in Mr. de Blasio’s backyard, where a Marine Transfer Station is being built to take trash, by barge, to landfills out of state. That project—derided by new neighbors of Mr. de Blasio’s on the Upper East Side and in Yorkville, who say it will hurt their quality of life and is a waste of money—is part of the city’s Solid Waste Management Plan, developed after the closure of Fresh Kills and which Mr. de Blasio voted in favor of as a councilman.

The station, which will cost upwards of $200 million, is designed to ship trash on barges to out of state landfills—a function that would obsolete by 2030, if all goes according to Mr. de Blasio’s plan.

The irony of Mr. de Blasio, who supports the building of the station, ripping the system was not lost on Kelly Nimmo-Guenther, president of Pledge to Protect, an organization that opposes the transfer station.

“When I heard that, ‘Yay, I couldn’t agree with you more. However, well, Mayor, then what are you doing wasting billions of dollars implementing Bloomberg’s Solid Waste Management Plan, which does exactly what you call outdated?'” Ms. Nimmo-Guenther said in a telephone interview. “I love what he’s saying, but his actions now need to support his words. We need him to not waste millions of dollars building transfer stations that will be obsolete when he gets to zero waste in 2030.”

But Mr. de Blasio told the Observer at the press conference that he won’t be able to achieve his ambitious goal overnight—and until then, the marine transfer station is necessary.

“We don’t get to snap our fingers and change everything overnight. We have to plan for today and plan for tomorrow simultaneously,” he said. “I believe in the solid waste plan—I always have. I voted for it originally. I still stand by it.” 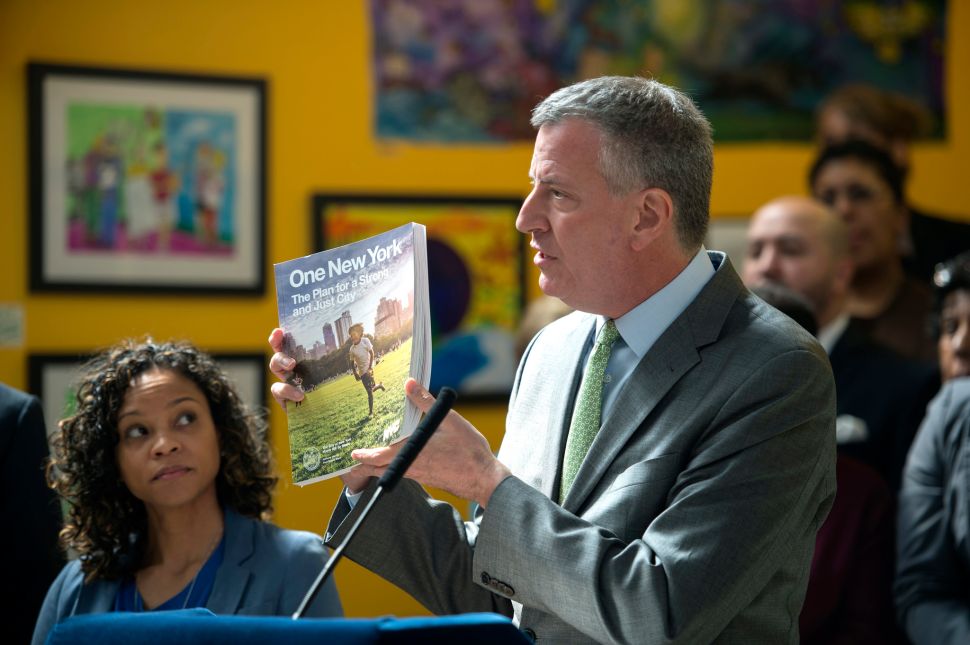