My husband found out about Billy & Billie before I did, which is kind of bullshit, because only one of us actually keeps up with current (fictional) network programming. We were working in two separate rooms–me in the computer den, he in the living room–when he yelled across our bedroom: “Hey, your friend Neil Labute made a TV show!”

“No he didn’t,” I reflexively answered. Because he hadn’t. If Neil Labute had made a TV show, I would know. After all, we had brunch a year and a half ago. He would have told me. Or someone would have, at any rate. There would have been outraged think pieces about it. Julia Klausner definitely would have made a comment or two on Twitter. I would have just felt it; a disruption in the force.

This is, after all, my job: to stay on top of current television programming. Or at least the good stuff. And in this particular instance, I had failed. Because LaBute’s (admittedly hard to find) original show for direcTV’s Audience Network–starring Adam Brody and Lisa Joyce as step-siblings falling ass-backwards into a dangerous liaison–is the best kind of new television show. Even as its characters snap and snark at each other, the portrayal of these flawed humans is humane…and dare I say, empathetic? It’s not quite Transparent for the East Coast set, but it’s not as far off as you’d might expect from the guy who brought you In the Company of Men.

While Billy (Brody) and Billie (Joyce) were growing up, they were never close. But now they are adults, living in New York–she as a somewhat employed illustrator, he as an editor-y type at a men’s magazine run by the flippant son of the owner (a delicious turn for The Office and GIRLS straight-man Jake Lacy)– and after a blotto night out, the two awake one morning to find themselves in bed with their sibling. Well, step-sibling, the term Billy keeps invoking like a spell that will magically turn their relationship from incest into a funny story to be told at the wedding.

If you’ve seen Some Girl(s), you know how well Brody can embody the LaBute archetype (LaBute created, wrote and directed the series): a smart but insecure intellectual type, whose apparent deference towards women is s-l-o-w-l-y peeled back to see the creep underneath. Unlike Some Girl(s)–or any LaBute production I’ve seen, to be honest–Billy & Billie refuses to let its jerk protagonist slither back under the rock from whence he came after being called out for his misbehavior. No, in his step-sister, LaBute has at last created a formidable opponent: Billie is even more sneering and guarded than her brother, but she’s also not afraid of making a scene. There could be not better foil for the passive-aggresive types who populate LaBute’s work than a woman willing to throw down and shatter a bowl of wonton soup, as Billie did this week after the following exchange (shortened for length):

Billie: Even if we stay together and have kids, especially if we have kids…or we make it to our 50th wedding anniversary, there will be a lot of motherfuckers out there who think we are sick and gross and deserve to rot in hell.
Billy: (Meekly) I get it, I do.
Billie: Are you in this or not?
Beat
Billie (cont’d):(Witheringly) Take your time.”
Billy: I am saying I do love you. I just need a second to think.
Billie: Sure, sure. Most people, when they say a second, they mean a little while. So how long do you think you’ll need? I have a stopwatch, so you just tell me.

Billy: Let’s just take a breathe, your food is about to come.

Wonton soup is placed down. Billie waits a beat, glaring, than hurls the soup to the floor. She gets up, slams her chair down, and picks up her coat. As she’s leaving:

While this kind of enraged, angry woman has appeared in LaBute’s work before, Billy & Billie’s structure as a show–it’s 2/3rds of the way through a 10 episode run–means that Joyce isn’t just there to give a speech and storm off. She continues to exist, more than just a back-talking little sister or a bitter ex but a work colleague as well (these two really like to push the term ‘incestuous’ to another level)…making her the second person at his job that Billy’s slept with.

I keep coming back to comparing this show to Transparent, which is also an empathetic portrayal about a selfish family grappling with a cultural taboo. So far, there hasn’t been a false moment in Billy & Billie, to nauseated horror of Billie’s mother when she discovers the two of them in bed to righteous fury of Billy’s former work fling, Denise (the incredible Li Jun Li) who threatens to murder Billy if it’s revealed that he had been sleeping with his (step-)sister while the two of them were hooking up. Then she delivers the kind of withering blow that trademarks this show as pure LaBute, when she tells him that when the dust settles, his sister might be the one with the full-time job at the magazine. “She’s much better at her job than you are at…whatever it is you do,” she hisses; a catalyst that leads to doubt, which leads to the Chinese food scene, which leads to the broken bowl, which leads to the third act of this marvelous new show.

You should be watching Billy & Billie, but if you’re not a direcTV subscriber, I’m not sure exactly how you could. See if someone will give you their password, maybe. Just … don’t ask a family member. You don’t want to make things weird. 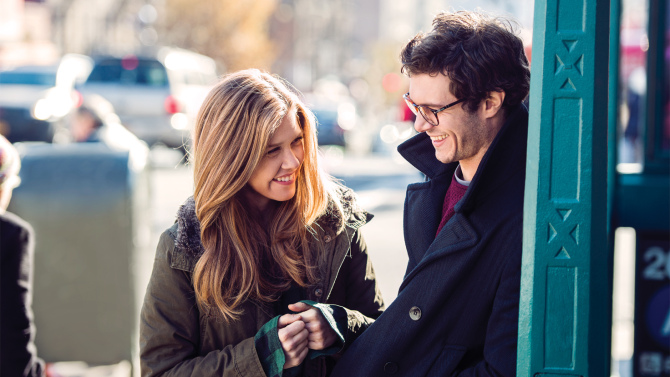