Hacker, mad man, homophobe, troll—a few weeks ago, after a six month investigation by the FBI and the Arizona Department of Public Safety, Randall Charles Tucker was arrested and charged with felony computer tampering.

When we spoke to Mr. Tucker—also known as “Bitcoin Baron”—last month, he was on a roll, taking down small-town municipal websites and sticking it to police officers, even when he was totally off-base with his accusations. At the time, we didn’t know the extent of his activities. But then, neither did the FBI.

Fuck Prison, Fuck the System, Fuck all you officers and fuck you government.

Chat transcripts, videos, photos and information obtained by the New York Observer reveal that Bitcoin Baron wasn’t just a sloppy hacker. He was a violent collector of child pornography and, quite possibly, mentally ill—but we’ll get to that part later. So how did he evade capture until someone simply tweeted out his name?

The long road to catching the Internet’s most inept criminal

The Bitcoin Baron saga started when an operation by hacker group Anonymous, #OpHongKong, sent a video to D.C.-based video news site News2Share on October 8th, 2014. When it blew up and caught over 300,000 views, News2Share’s Ford Fischer received an email from Bitcoin Baron.

On October 8th, Bitcoin Baron emailed Mr. Fischer from an email address called “settheworldfree999@gmail.com”—at this point going by aliases like “ZeusAres” and “Key Last.” He wanted Mr. Fischer to upload a video of his, which was labeled “Anonymous,” but clearly of inferior quality.

“Presumably, his feeling was, ‘If these guys put up my video, it will magically become viral as well,'” Mr. Fischer told the Observer, “But that’s not obviously going to be the case if it’s shit.”

At first, Mr. Fischer didn’t even see the email. In only a few hours, Bitcoin Baron issued a distributed denial-of-service (DDoS) attack on News2Share, taking down the site for not complying immediately with his demand. Mr. Fischer ended up uploading the site just to make the problem go away. It received less than 500 views.

Mr. Fischer didn’t hear from Bitcoin Baron again for another two months, when he popped up again with the “Bitcoin Baron” alias and YouTube channel. The channel is covered with various videos: threats against government agencies, terrible raps, and records of rudimentary DDoS attacks—many of the videos have been taken down in the past few months, without explanation. The Baron continued threatening News2Share, but by then moved on to issuing threats against the site Counter Current News.

From then on, he started ramping up his activity. With March 2015 being his period of peak activity, Bitcoin Baron took on the following projects:

Bitcoin Baron was long-time player of Sherwood Dungeon, a free online game where he fell in with a gaming group called “)T(“. While he was attacking municipalities and threatening reporters, he was in a Skype group where he would gloat and attempt to shock the other members of the chat—the Observer obtained these chat transcripts.

After his attack on the City of Madison, for example, he complained that the first news reporters misattributed his attack to Anonymous—a common mistake among general assignment reporters who don’t know anything about hacktivism. From the chat transcripts in his gaming community:

In public, he maintained a Twitter account and YouTube channel to promote his work, and reached out to the press repeatedly to draw more attention to his work. According to Arizona DPS and the FBI, a tweet was sent publicly—and accurately—that claimed Bitcoin Baron’s name was Randy Tucker and that he had “no skill.”

He was arrested the same day.

Hacker without a cause

When we spoke to Bitcoin Baron last month, he positioned himself as a crusader against police injustice, municipal mismanagement and the corrupt, going after “anything [he could] find really that’s got something to do with innocent citizens in the crosshairs of police.”

Instead, Bitcoin Baron—like many hacktivists whose placebo politics lead them from one hot cause to another—really just wanted to do damage. When a man died in police custody in Moore, Oklahoma, Bitcoin Baron took down the city’s municipal website with a ransom of 100 bitcoins. Regardless of the fact that $28,000—the amount 100 bitcoin was worth at the time—is an absurd ransom for a small-town website, Bitcoin Baron was unable to articulate exactly how paying him was supposed to right any wrongs.

He didn’t, of course, get his money.

He attacked municipalities, gaming services, hospitals, web hosts and other hacking groups as his targets and goals shifted. And regardless of his hatred of Anonymous, he also casually participated in #OpSeaWorld, an Anonymous operation largely inspired by the documentary Blackfish, which exposed the widespread kidnap and abuse of killer whales.

Bitcoin Baron, who in his spare time is the worst rapper on the Internet—let’s call him the Bitcoin Baron of the rap game—even made the following rap video in honor of the op:

On March 12th, Bitcoin Baron attacked the website for the Shriners Hospitals for Children organization. People who chatted with Bitcoin Baron claim that the site for the children’s hospital was not just taken down, but defaced with child pornography—the Shriner’s Hospital couldn’t be reached for comment.

“The same thing was the case to our chat,” Andreas said. “He attempted to spam it with CP, and as no admins were
on at the time, it was a war to keep changing it back until he got bored.”

For many in Bitcoin Baron’s tiny online community, that was the moment they were totally unable to go on tolerating him, and he was soon banned.

Within the week, Bitcoin Baron started collaborating with @TorReaper, an Anon who takes down sites hosted on Tor’s hidden services network—in this case, child pornography sites, including Girls Hub, the site he’d celebrated in private chats:

By the end of March, the Baron had latched onto the #OpDeathEaters campaign, an ongoing Anonymous operation convinced that there is an international pedosadist ring permeating Western oligarchy—obviously a discussion for another time.

If his muted rap lyrics are to be believed, he spent two weeks in a “mental hospital” after he was arrested for aggravated assault for stabbing his father. And just a couple of days before the first time we spoke to him, Bitcoin Baron went into his Skype chat and threatened to kill himself, bragging to the chat room and seeking shock and validation:

At this point, Bitcoin Baron turned on his video to show everyone the pills he was downing. One friend pulled up Snapchat and recorded the apparent suicide attempt and sent it to another member of the Skype group:

Bitcoin Baron wasn’t a hacker mastermind, either. He had a functional understanding of how to use encryption tools and onion routing, which anyone could learn in an afternoon from a handful of tutorials on YouTube. Mr. Fischer suspects that the tools he used to take down various websites were all of the plug-and-play variety. All he needed to perform the DDoS was to find a tool, plug in a URL, and watch the site go down.

Really, there isn’t a worthwhile skill or capability in Bitcoin Baron’s tool belt. The tool he used to make his videos is Camtasia, a laughably rudimentary video capture tool. His videos, which are mostly just still images with audio, instead of being a single image frame seem to be a rolling screen recording of a still image on his desktop—in one previously public video, you can actually see the mouse moving across the screen. 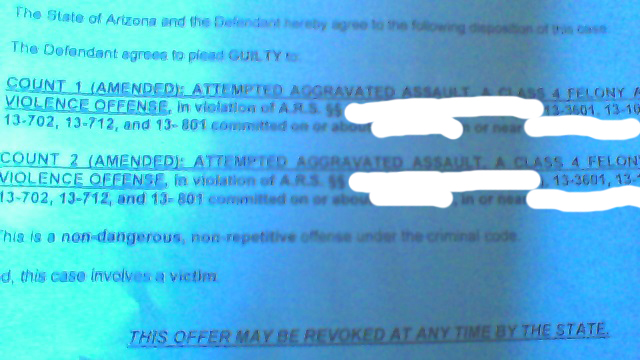 Bitcoin Baron showed his felony charges to other over Skype, gloating over the fact that he stabbed his father. (Photo: Anonymous)

So how did this potentially insane, technically inept pseudo-hacker cause so much damage? Because causing damage has become so easy. Too often, we believe that because so many people do not cause damage on the Internet, it is because they are unable. Everything from sophisticated breaches to spamming and trolling on social media have become easier because as life has become more digital, both the tools of attack and the vulnerability to those attacks are in everyone’s hands.

“If you have distributed powers of defense, but also distributed powers of offense, you’re in a situation where you are much more secure on average, but if somebody really wanted to get you, they can do really bad things,” Benjamin Wittes, co-author of The Future of Violence, told the Observer last month. “So you’re simultaneously more and less secure, depending on who you are and who your enemies are.”

“He was trying to make it seem like part of some network the whole time,” Mr. Fischer said. “It seemed like he wanted to have a sense of belonging. It makes sense that he’s not a socially adaptive young man, and it seems like he was taking that out on the Internet.”