Together with Paul, a Republican who is now ramping up a national campaign, Booker, a Democrat with a national profile, is co-sponsoring legislation designed to revamp the American criminal justice system.

The legislation proposed jointly last year by Booker and Paul, called the REDEEM Act, includes several components meant to overhaul the U.S. criminal justice system. It promotes states changing policies so children are steered away from the adult criminal justice system; constrains the solitary confinement of children and automatically expunges or seals the criminal records of juveniles who have committed nonviolent crimes, depending on their age.

The REDEEM Act also allows for a path for adults with nonviolent offenses to seal their criminal records and reinstates food stamp and welfare benefits for low-level drug offenders who have served their sentences.

In an interview with PolitickerNJ, Booker was unsure whether Paul’s work with the other side of the aisle will hurt the Kentucky senator in the upcoming 2016 Republican presidential primary races, or what impact Paul’s entry into the race has on the potential presidential primary plans of Paul’s Republican rival, New Jersey Governor Chris Christie.

But Booker did say that Paul’s bipartisan efforts should prove to be a boon, not a bust, for his national hopes.

“I think this country in general wants people that can work together, that can reach across the aisle,” Booker said on Tuesday after speaking in Paterson about proposed legislation that would protect against predatory tax-time products. “I hope that translates into both the Republican and Democratic primaries.” 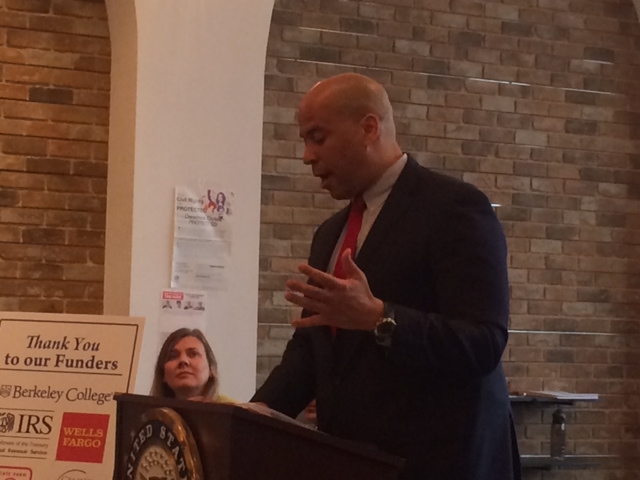