Some years back, when the last of my children left home, I took up a new sideline from my career as a writer. I announced my availability to coach young people—mostly high school seniors—in the composition of their college essays. Partly this was a way to keep young people in my life at a moment when the three to whom I’d given birth had picked up their oversized tennis shoes and moved on to college themselves—college, and then life after college. And partly (a writer’s income being what it is) it was a way of earning money.

Most of my students came from private schools in the San Francisco Bay area. Children of privilege, they had grown up (like my own three, though in their case they’d had benefit of scholarships) with tennis lessons and music lessons, summer camp, trips to Europe, and later (in anticipation of the college process, perhaps) they had signed up for summer programs that set them to work building schools in Haiti, latrines in Africa. All good material for the college essay.

I liked these students. They taught me that hardship is not the exclusive territory of the underclass. They’d lived through tough divorces, cocaine-addicted parents, illness, suicide in the family, the death of a sibling, even, and on my living room couch together, we talked about those things. When the letters of acceptance arrived from the colleges of their choice (Brown, Princeton, Harvard) I felt a rush of real joy.

My own college career had ended early. Admitted to Yale in 1971 as part of the first class of women who would experience a full four years at the school, I stayed only two semesters before withdrawing—giving up my very good scholarship, my friends, and the plans to study art, anthropology, history, religion, film animation, French, even science—all out of an embarrassingly old-fashioned yearning to be with a man I loved.

The man was gone in under 12 months, but in the 43 years between the day I left Yale at 18, and where I sit now, at age 61, I never returned to college. It is a fact of my life I name as a central regret, not so much for my lack of the degree as for having deprived myself of those years to study not simply all the things I’d use in my career life but even more so, all the things that would make me a more deeply educated human being.

I returned to Yale only three times in those four decades. But last week, on the invitation of a professor there who teaches a book I wrote in her class on memoir, I made the trip from California to New Haven to speak with her class and to give a reading there.

It was a great day—one of the best. Sitting around the table with those 12 students, listening to their smart, funny, perceptive questions and observations, I felt as if actual sparks were shooting across the room and over our heads. Three hours flew by as if they were nothing. As the last 43 had, just faster.

Two days later, I was in Boston, boarding a plane to return home. This particular flight was filled with at least two-dozen young women who looked to be 15 or 16 years old. A school trip, I figured. Except something about this particular group looked different—the level of animation and excitement among them, the scruffiness of their luggage, the absence of expensive tech gear (not a single pair of headphones in the bunch), but most of all, no sign of the boredom often exhibited by kids on school trips whose affect might best be characterized as “been there, done that.” These young people (girls, mostly) made their way down the aisle of the 747 calling out, “I got the window seat!” as if this might have been their first plane trip ever. As it turned out, for some this was true.

Two of them sat in my row. So I asked, who were they and what had brought them to Boston?

They were high school sophomores from California’s Central Valley, returning from a bus tour of 14 top Eastern colleges they’d somehow managed to fit into a single week of spring vacation.

These were public school students, most of them Mexican-American, chosen for this trip because of their excellent grade point averages. They’d earned the money for the trip with fundraisers. Now they were headed home.

The girl sitting next to me, Lourdes, was the daughter of parents who picked fruit—strawberries, mostly. The girl next to her, Esther, was the daughter of a corrections officer and a school crossing guard. None of these two girls’ parents had finished high school. Nobody in either of their families had attended college. But though a college education was not, as it had been for my three children, a birthright, they were clear now that they were college bound.

As the plane made its way across America—plains, mountains, desert, clouds all passing below us—we talked about the colleges they’d seen on their whirlwind tour, and which they’d liked best. (Well, they loved them all, but Lourdes particularly loved M.I.T. and for Esther it was Yale). I told them I’d gone to Yale myself, though I left out the part about leaving. How could I explain to these girls, for whom making it to a great university was everything, that I had actually been granted the opportunity and walked away from it?

They asked me for advice on getting in, and so we spent an hour or so talking about the college essays they might write: about a grandmother in Mexico, a summer spent picking strawberries with the mother of one, and what it meant, to a family in the Central Valley, that no rain had fallen there for a very long time now.

When the plane landed, a number of the girls on the plane let out shrieks of joy or terror (but not my seatmates, who sat bolt upright, staring straight ahead and holding the arm rests). As I leaned over to say goodbye, Esther handed me the business card she’d had printed up for this trip, with a quote from the Bible (Matthew 19:26) printed on the front. “With God all things are possible.” I had no card to give her myself, but I wrote down my email address and told both girls they should stay in touch.

“It’s not my business,” I said to them. “But I want to ask you something. I’m just guessing you respect your parents a whole lot. I bet you aren’t angry at them, much.”

The two girls looked at me, clearly astonished. Just at the idea.

As we headed down the airport corridors (20 girls in new sweatshirts, bearing the names of Princeton, Harvard, Penn), I could still hear their voices, laughing and talking. They had a long bus ride to go, out to the Central Valley, where their hopeful parents would be waiting for them. Proud and excited, no doubt, at the future that lay ahead for their children, so far beyond anything they’d been able to dream of for themselves.

At baggage claim, I overheard one girl talking. She had brought back two souvenirs from the trip. A fork from Princeton. And a brick from Yale.

They had caught a glimpse of their future that week—their possible future. No way they were letting it go.

Joyce Maynard’s most recent novel, After Her, was released in paperback last year (William Morrow Publishers). Her memoir, At Home in the World, has been translated into 17 languages. 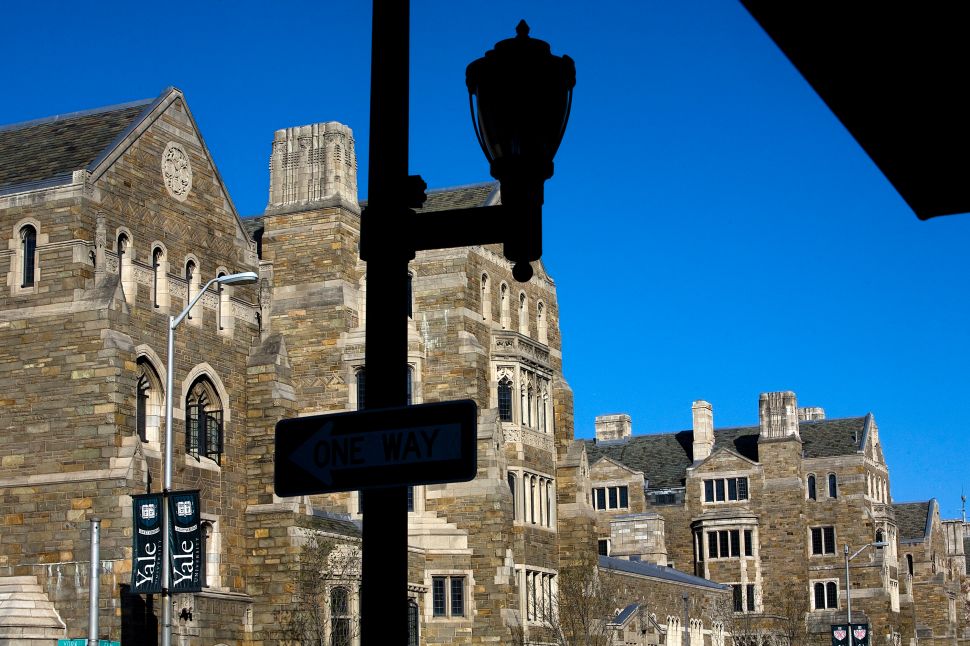