It’s the most expensive baseball card in the world, but did this circa 1909 example of the T206 Honus Wagner sell cheap at the spring auction of specialty sports auction house Robert Edward Auctions?

During the 2015 spring auction, which ran from April 2 to April 25, the Robert Edwards Auctions house expected the rare card to bring in at least $1.5 million. The opening bid even started at a promising $100,000, but after 42 prospective buyers placed bids throughout the three-week sale, the card ultimately only just squeaked past the million-dollar mark, selling for $1.3 million this past Sunday.

Known among collectors as “The Oceanside Wagner,” this incredibly rare card of the Pittsburgh Pirates Hall of Famer was discovered among other 1910-era memorabilia in the basement of a house in Oceanside, New York.  The card has only seen two previous owners and remains in top condition, selling in 2008 for $791,000 as part of the estate sale of Philip Weiss Auctions.

While anything over $1 million might seem extravagant for a baseball card, the California-based Professional Sports Authenticators rated this version of the card with a 3 out of 10 score, placing it among the top five T206 Wagner cards in terms of condition.  The record was set by hockey player Wayne Gretzky’s T206 Honus Wagner in 2013, which sold for a whopping $2.8 million.

Nicknamed “The Flying Dutchman,” the Pennsylvania-born Mr. Honus Wagner is widely considered one of the greatest shortstops of all time and one of the best all-around players in baseball history. He played a total of 21 seasons for the Pittsburg Pirates, retiring in 1917 after setting a league record of 3,420 hits, 1,739 runs and 723 stolen bases. But only an estimated 60-70 different examples of the T206 Honus Wagner are currently thought to exist.

The T206 Honus Wagner cards were issued between 1909 and 1911 by the American Tobacco Company to promote cigarettes. Rumor has it that Wagner might have refused to have his likeness reproduced on future cards because he may not have felt the pay was high enough or, in a more flattering version of the story, might not have approved of promoting cigarettes to children. As a result, only around 200 cards are thought to have ever been made, significantly increasing the value of the card among collectors. Therefore, it comes as a surprise that the card didn’t sell for an even higher price during this latest auction.

“This was a special card, not only for its condition relative to other examples, but for its great story of having only two previous owners in the past 106 years. The record price signaled the strength of the baseball card market and the appreciation that collectors have for rare items,” said Brian Dwyer, Consignment Director at Robert Edward Auctions, a well-known New Jersey sports auctioneer, to the Observer.

Indeed, considering most baseball cards are made out of a thin strip of cardboard, $1 million doesn’t seem like a shabby deal at all. 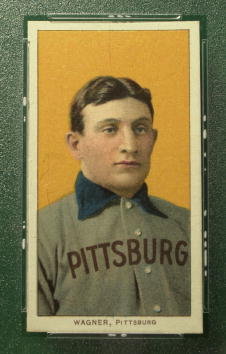