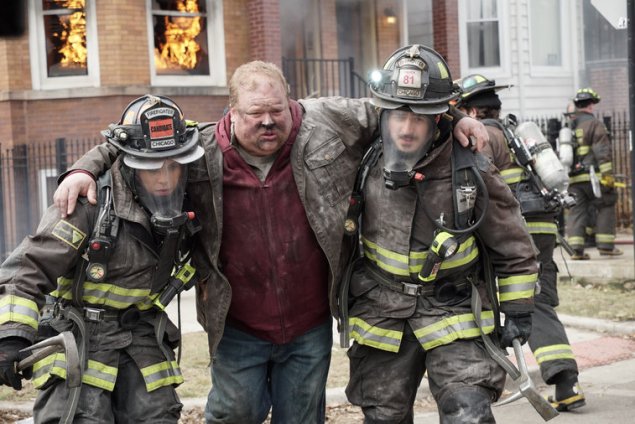 Not everyone made it out of crossover week. (photo: NBC)

There has to be a lot of story going on to make three hours of television worth watching, right? Especially when it’s spread out over three different shows. Huh? Unless you’ve been living in a cave (or, you don’t watch much TV, in which case, shame on you), you know that this was Crossover Week – the time during which a trifecta of interconnected Dick Wolf shows embark on telling a single story that involves characters from all three shows. The series swapping stars and locales included Chicago Fire, Chicago PD and Law & Order: SVU.

The teams united to catch a guy who had apparently been attacking women for years, but had yet eluded capture for some reason – a modern day Ted Bundy, as described by series Executive Producers Matt Olmstead (CF, CPD) and Warren Leight (SVU). (More about how they put this all together here.)

Things get rolling when someone sets a fire that the experts on CF discover was arson. Pulled from the blaze is a victim who’d been raped and beaten and left to die in the fire. The fact that said arsonist left his vic with her fingernails painted green sends up a signal that brings Sergeant Benson from New York to the Midwest as she recognizes the green polish as a perp’s calling card from several cases she’d worked on years ago. (He’s her white whale!)

Working with Sergeant Voight, who she has a rapport with, as they’ve worked on cases before (most notably the last crossover!); Benson sets out to find the man who has evaded her capture for so long. Because the suspect often dresses in scrubs, and due to some other reasons, Benson at first she suspects Halstead’s doctor brother. But, he’s quickly cleared, leaving the team back at zero. After joining the Sarge in Chicago, the rest of her squad help the CPD team distinguish a pattern and create a profile of the perp. Rather rapidly, the main suspect becomes a dude named Dr. Greg Yates.

When Yates is picked up and brought in for questioning, he’s as creepy as everyone knew he would be. He also takes a shine to Detective Lindsay.

After leaving the precinct, he goes so far as to call Lindsay and request a private meeting with her. Of course she agrees (because she’s a good detective, right?). When the pair rendezvous, it’s tense and scary but Lindsay just can’t close the deal and she has to let him go. Sadly, the team discovers that he was using her as an alibi to cover for another one of his assault and arson tirades.

Before the folks in Chicago can nail Dr. Yates, he snatches Lindsay’s friend and protégé, Nadia, who also happens to be an assistant in the Intelligence Division at CPD.

The hunt is on to find Nadia, but sadly, it doesn’t end well when she’s found in a shallow grave in New York, which brings the Chicago team to the Big Apple to make sure that Yates gets the punishment he’s due.

Once Yates is caught, it’s up to the SVU team to work with ADA Barba to nail the guy, but clearly not having ever learned anything from watching courtroom dramas on TV, Yates decides to defend himself. Had he sat quietly and let his attorney argue on his behalf, he may have had a chance against Barba, but the slick ADA, knowing Yates’ penchant for reveling in his crimes, arranges it so that Yates shows the jury just how demented he truly is.

Thankfully, the jury does the right thing and convicts Dr. Yates. But, before he can be ushered off to prison, Voight manages to get him alone and while administering a chokehold tells Yates that someone will get him in prison, which may seem rather obvious as prison is going to be a tough place for the doc, but it’s apparent that this maneuver by Voight is more for his own benefit – to somehow help him get over the loss of Nadia, someone who was not only under his command but who he clearly cared about.

That wraps up the clinical description of what happened throughout the crossover event, but let’s take a few minutes to discuss what helped the endeavor really work.

As always the guess casting was spot on. (Way to go Jonathan Strauss!) Dallas Roberts was perfectly sinister as protagonist Dr. Yates, especially in those interrogation and courtroom scenes. It’s not an easy feat to take somewhat static scenes and make them so undeniable enthralling. Much of the credit for those exchanges, as well as the overall entity, obviously goes to the writers as well. The dialogue here was crafted exceptionally well, as usual. We’ve come to expect a high level of quality in that department and this certainly exceeded those expectations.

And, let’s give a shout out to the three directors of each installment – Joe Chappelle (CF), Nick Gomez (CPD) and Martha Mitchell (SVU). Each was able to stick to the look of their series, while still being able integrate the necessary outside elements to create a very seamless feel to the entire project. Mitchell, in particular soared, given that she had to oversee the courtroom scenes – a setting that regular views of SVU see almost week in and week out – by staging some extreme close ups she used the disturbed personality of Dr. Yates to full effect as her shot choice evoked just the right about of queasiness.

Overall, it bears repeating that compiling three hours of story and action is a tall task – most feature films are not that long or involved! So, to have done it, and done it successfully, is quite a coup.

The elements that made this endeavor work are the very things that are needed to make any narrative triumphant – an intriguing case, powerful story movement, believable character reaction and a satisfying conclusion to all of it.

All of these factors were present, and then some. While it’s just ‘fun’ to see the various characters of CPD, CF and SVU intertwined for a common cause, there has to be more than just that, and clearly there was in this crossover. In fact, this one takes things to a whole new level so much so that it’s hard to fathom what TPTB will do for a follow up (and you know there will be more!) And, if Chicago Med (please!) comes onboard, we can all be sure that there will be even more head scratching as to how to incorporate a fourth show into such an event. But, I think we can all agree, all the work will be worth it in the end. 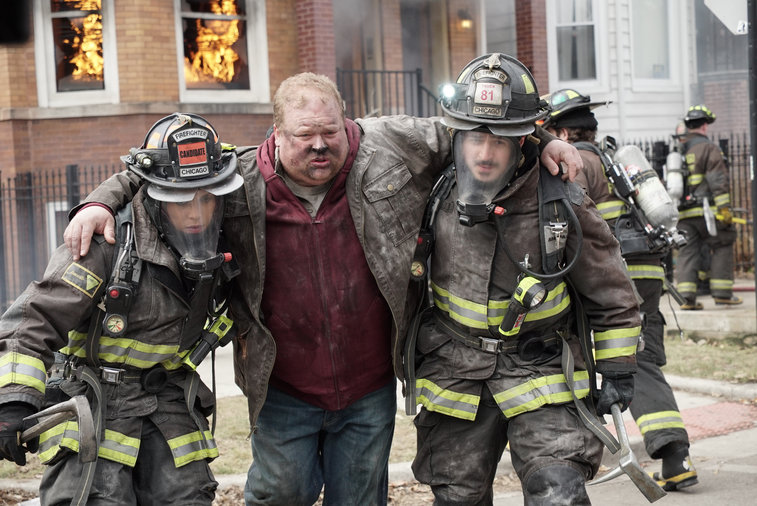