MANCHESTER, N.H. – Hours after giving a speech in which he criticized federal entitlement spending and offered a plan for reform, New Jersey Governor and potential 2016 Republican presidential candidate Chris Christie engaged a New Hampshire resident in a serious discussion about the issue and his reform proposals.

“This is for the greater good of our country,” Christie told Kath Allen in Caesario’s Pizza on Elm Street in downtown Manchester, New Hampshire on Tuesday, surrounded by the media scrum that is following Christie around during several appearances in the Live Free or Die state this week. “I think if you look at what I’m proposing, that’s what will preserve Social Security and Medicare for the people that really need it. We better get smart about how we’re going to do it.”

But in an interview with PolitickerNJ moments after she spoke with Christie, Allen wasn’t sure if Christie’s proposed federal entitlement spending reform ideas add up.

“I’m just really concerned about these programs. We keep saying we’re going to hurt the middle class, but we keep ignoring the way-up, big corporate salaries,” said Allen, of Peterborough, the New Hampshire coordinator for the National Committee to Preserve Social Security and Medicare, a nonprofit, nonpartisan advocacy group. “I’m concerned we’re just changing the system, but not avidly going after a fair and equitable pay in [to federal entitlement programs].”

But in comments to the press, Christie defended his entitlement reform plan.

Some political observers have noted that Christie’s numerous appearances in New Hampshire this week show that he could be proverbially going for broke as he lags behind in national polls listing potential GOP 2016 candidates.

But as he charged ahead toward a decision about whether or not to run for President, Christie seemed unperturbed by both dipping national and New Jersey poll numbers, calling them “temporary snapshots in time,” as well as the looming specter of indictments of some of his aides and allies related to the 2013 George Washington Bridge access lane closure scandal.

“I was U.S. Attorney [for New Jersey] for seven years, and I understand these investigations take however long they take, and I’m not certainly not going to be urging [current U.S. Attorney for New Jersey Paul Fishman] to do anything other than to do his job in a fair and responsible way,” Christie said, indicating that he will finally decide about whether or not to run for the White House in late May or early June. “It certainly is not what will make my decision or not make my decision. In the last 15 months, there hasn’t been one fact that’s been revealed by an internal investigation, by a very partisan legislative investigation, or the leaks from the federal investigation that has contradicted one thing that I’ve said.” 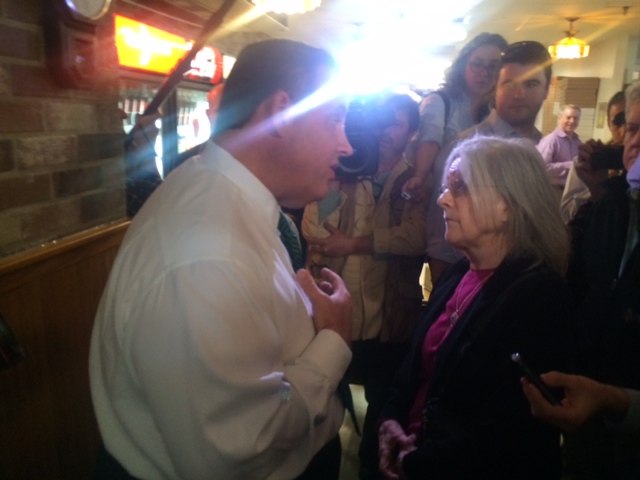