The City Council passed a bill this afternoon that will ban most employers from using credit histories to screen job candidates.

The bill passed the Council by a vote of 47 in favor to three opposed.

Left-leaning council members, labor unions and activist organizations argued that credit checks are discriminatory, unfairly targeting minorities and low-income New Yorkers with poor credit histories. The bill, known as the “Stop Credit Discrimination in Employment Act,” was hailed by supporters as one of the “strongest” measures in the country against employment credit checks.

“Credit checks for employment unfairly lock New Yorkers out of jobs for a whole set of unfair reasons. Divorce, healthcare debt, student loans, identity theft, simple errors,” said Councilman Brad Lander, a Brooklyn Democrat and lead sponsor of the legislation, at a City Hall press conference. “There is no demonstrated correlation between people’s credit history and their likelihood to commit fraud or theft, between their job performance—this is smart legislation.”

Council Speaker Melissa Mark-Viverito said the use of credit checks had a disparate impact on certain groups, ranging from people of color to domestic violence victims. “It is very much a discriminatory practice,” she said during a City Hall press conference.

“All New Yorkers deserve the chance to compete for a job based on their skills and qualifications, not three digits on their financial report,” she said.

During negotiations on the bill, some business groups called for broad carve-outs found in other municipalities, which often exempt the entire financial services industry from the law. Advocates, meanwhile, called for there to be almost no exceptions to the ban. Today’s legislation includes exemptions for a smaller category of jobs, council members said.

“This is going to be the strongest law on this issue in the country,” Ms. Mark-Viverito said.

Among those exempt—people whose credit history can still be checked—are police officers, peace officers, law enforcement personnel at the Department of Investigation, any position subject to DOI background checks, those bonded by city or state law, national security professions, and those with access to trade secrets or with the signatory authority to assets above $10,000.

Mr. Lander said in eight of the other 11 jurisdictions with similar laws, the entire financial sector is exempt—”down to bank tellers and custodians”—with many locales allowing credit checks of anyone in any kind of managerial position or with access to a company credit card.

“None of those are in this bill,” Mr. Lander said.

Some business leaders, like Partnership for New York President Kathryn Wylde, were also pleased with the final language of the legislation.

“The Partnership represents companies that employ almost a million New Yorkers. In this age of technology, where many employees have access to private customer and company information and funds, employers have a greater responsibility than ever to carefully vet their workforce,” Ms. Wylde said in a statement. “We worked with the Mayor’s office and the City Council to ensure that the final legislation allows employers some discretion in use of credit checks, which we hope proves sufficient to protect the interests of businesses and consumers.”

But the bill didn’t find favor with everyone in the Council. Councilman Mark Weprin, a Queens Democrat, said he didn’t feel comfortable telling employers who they must hire, as long as they follow state and federal law.

“I just feel this is a little bit too much of the nanny state,” Mr. Weprin, who voted against the bill, said.

A coalition of 79 community, labor and student organizations, including the Working Families Party and the New York Public Interest Research Group, led a push for the credit check ban. Stuart Appelbaum, the president of the Retail, Wholesale and Department Store Union, said the bill “puts an end to a practice that puts job applicants behind an economic eight ball.”

“Using a person’s credit worthiness to judge their workability is really just another form of discrimination,” he said. “In New York City, workers will never again have to face that kind of discrimination.”

Ramon Lebron, a student at Bronx Community College, said student loan and personal debt had kept him from landing jobs in the finance industry.

Mayor Bill de Blasio is expected to sign the bill into law. 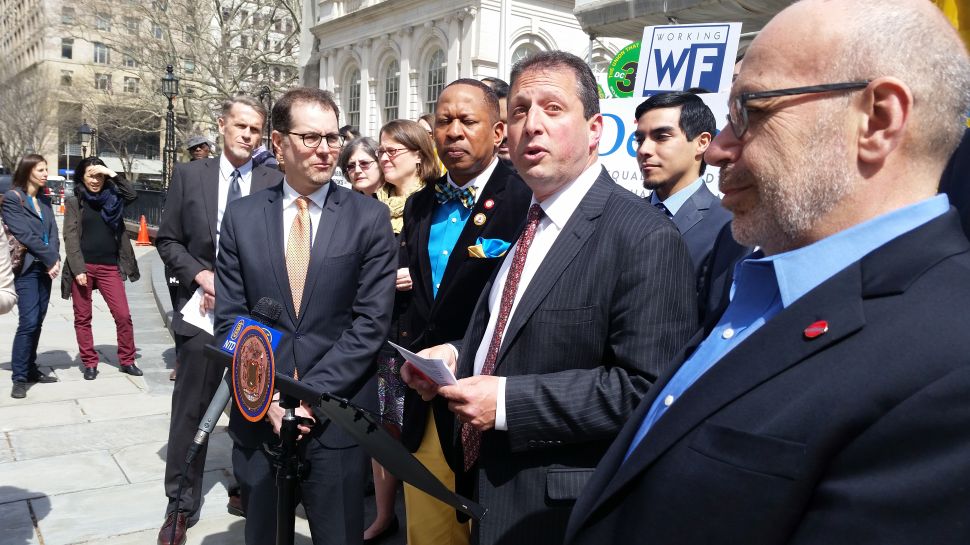